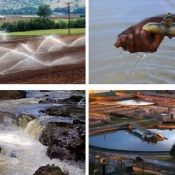 3 September 2014 | STOCKHOLM | Most people associate environmental consultancy First Climate with carbon footprinting and greenhouse-gas neutrality, but as its clients began asking about water risk, CEO Sascha Lafeld began digging for answers. That was about three years ago.

“At the time, most of the initiatives out there were focusing on developing standards for water footprinting,” he says. “What we wanted to do was apply our learning and expertise in the carbon space to water.”

That, however, required a bit of adaptation, because carbon and water are two completely different spaces and must be treated as such. To begin with, he says, water neutrality doesn’t exist, because there’s no way to offset water consumption in one location with water treatment in another. Plus, local populations are always affected by water impacts, whereas the impacts of carbon emissions are felt globally and not necessarily locally. But while the offsetting mechanism won’t work in the water space, the basic formula behind it can.

“You can transfer the logics behind the certification process in carbon to water projects,” Lafeld says.

Out of this line of thought came the concept for the Water Benefit Standard (WBS), a results-based approach to finance global water projects that was launched at World Water Week here today. The Standard was initiated by the Water Benefit Partners, a public-private partnership that includes First Climate and corporates like Nestle and the Carlsberg Group. An original partner was the Gold Standard Foundation, the non-profit carbon project certification organization. The Gold Standard administers the WBS and has been developing it over the past 18 months. The organization, which already manages a carbon standard, carries a lot of experience, Lafeld says.

Brendan Smith, the Water Programme Manager at the Gold Standard, says in the last year they have organized technical experts, aid organizations, donors and financial and project developers to iron out the Standard’s complexities and ensure it was ready for today’s launch.

Under the WBS, projects are certified by the Gold Standard and receive Water Benefit Certificates (WBCs) which can be sold to companies, investors and others with an interest in good water stewardship. Certificate purchases will provide a revenue stream so project activity can continue year after year. The WBCs represent a specific amount of water that has been treated, conserved or sustainably supplied.

An added gain of the WBS projects is the socio-economic and sustainability benefits.

“In the water world, it’s even more important and imminent to look at the socio-economic sides of these projects than in the carbon space,” Lafeld says, because of their guarantee to have a local impact. The Gold Standard has a history of focusing on these aspects as well as the environmental benefits.

Two pilot projects have been certified and fully issued with many more in various stages of development. One is a WASH (water, sanitation and hygiene) project in Uganda and the other is a Sustainable Sugarcane Initiative in India. An access to clean water project in India isn’t too far away from issuing certificates with another WASH project in Mongolia roughly a year away.

The next round of pilots won’t focus on WASH but on agriculture and wastewater treatment. This will involve adopting at least two new methodologies. The methodology designed for the sugarcane project is very specific. In this next phase, the Gold Standard plans on using methodologies with wider appeal by developing them or reviewing and approving external methods. Switching from flood to drip irrigation is one example.

“We’re about scaling these projects up beyond the small scale WASH to start looking at large-scale impacts across the landscape,” says Smith. They also plan on incorporating natural infrastructure approaches into many of the projects.

The WBS’ next phase will also include more stakeholder engagement. Smith says an interactive website will be created after the launch during a three month open period where all stakeholders can comment. The comments will be used-along with the knowledge derived from the ongoing pilot projects-to refine and improve the Standard.