Today, the US Fish and Wildlife Service determined the greater sage-grouse does not warrant a listing status under the Endangered Species Act. But the efforts to conserve the bird’s habitat aren’t slowing down and the federal agency listed mitigation as a key part of its plans to balance quality sagebrush habitat with the demands of a growing western economy. 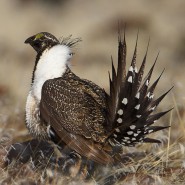 22 September 2015 | The historic conservation movement that spanned private farmers and ranchers, state and federal agencies and a multitude of NGOs was successful enough to thwart a listing status for the iconic western bird, the greater sage-grouse. The US Fish and Wildlife Service decided a listing status under the Endangered Species Act (ESA) for the bird wasn’t warranted citing this massive effort to conserve the species’ dwindling habitat as the prime reason.

“The deteriorating health of the bird has sparked the largest land conservation effort in US history,” Sally Jewell, the Secretary of the Department of Interior (DOI) said in a short video announcing the decision. “The FWS has determined that these collective efforts add up to a bright future for the sage-grouse.”

During a press event announcing the decision, western governors, Jewell and other public officials said the grouse is something of a canary in the coal mine, a warning about unsustainable development. But it’s also paving the way for landscape level conservation going forward.

The grouse’s population once numbered in the millions and spanned across the wide open spaces of the West but it’s been in decline for decades due mainly to growing agriculture, ranching and energy interests though drought, wildfire and climate change factor in as well. The DOI estimates the species population is between 200,000 and 500,000 which is a 30% decline from numbers in 1985 and almost a 90% drop since the 19th century.

Over the last several years, the 11 western states where the ground-nesting bird resides have implemented a number of initiatives and plans to conserve the bird’s dwindling numbers-and avert the complicated and expensive regulatory demands of an ESA listing.

In its statement, the American Bird Conservancy noted the Bureau of Land Management and the Forest Service’s land management plans, which cover 50 million acres, as an important part of the non-listing decision. These complex plans need to be given a chance to work, the statement read. The DOI also launched such projects as the Sage-Grouse Initiative, a land management program aimed at securing quality habitat within ranching operations. Roughly half of sagebrush landscapes are located on federal lands making the department a key stakeholder.

States are another key stakeholder. Oregon, for instance, established the Sage-Grouse Conservation Action Plan and Wyoming implemented a statewide conservation strategy. Montana has a similar plan and other states have implemented strategies too.  Colorado moved forward with the Environmental Defense Fund’s (EDF) brainchild, the greater sage-grouse habitat exchange, a venture focused on moving mitigation dollars to ranchers in exchange for sage-grouse conservation.

“We draw from the sharing economy to unlock the vast untapped potential of private lands and use market forces to get small improvements on a very large number of acres,” EDF’s Eric Holst said in a blog post.

Mitigation was added to the mix in other forms as the Sweetwater River Conservancy in Wyoming created the first ever greater sage-grouse conservation bank and Gold mining company, Barrick Gold has plans with The Nature Conservancy to establish a sage-grouse bank in Nevada. Plus, the DOI’s agencies’ efforts and Wyoming’s strategy contain a mitigation component requiring developers follow the mitigation hierarchy and compensate for unavoidable impacts. This provides incentives for compensatory mitigation like conservation banking despite the non-listing status.

Dan Ashe, the FWS Director, noted mitigation and its ability to achieve a net conservation gain for the species as a key part of the overall sagebrush conservation strategy.

Brian Kelley, a wildlife biologist previously with the FWS, noted there’s a lot of fear associated with an ESA listing which is why he thinks the best outcome is this non-listed status. But all stakeholders must act accordingly. “For voluntary conservation to work, you really need to own it. Private landowners need to do their part and federal and state governments need to do theirs,” he said.

“We want to see regular reviews of the species’ population trend to learn if the current long-term decline is reversed. The plans must be shown to be working, and the extraordinary conservation efforts on private lands continued. If not, the listing issue may have to be revisited in the future” Scott Holmer, the Senior Policy Advisor for American Bird Conservancy, said in a statement.

The FWS said it will monitor the ongoing conservation efforts, measuring population trends which will culminate in a reevaluation five years from now.

The greater sage-grouse is the type of species that will always require conservation whatever the regulatory status, Kelley said.

For now, the consortium of stakeholders can enjoy the moment. “The reason the greater sage-grouse was not listed as an endangered species is because of major investments made in private working lands, and strong commitments by ranchers to steward their lands for sage-grouse,” Holst said in his blog on the listing.

Although not everyone is happy with the Service’s decision. Environmental organization, Defenders of Wildlife, says the DOI’s land management plans aren’t strong enough on addressing key threats like climate change or protecting the bird’s winter habitats.

Current advanced scientific understanding of the species, combined with the inadequacy of the plans to protect and restore the sage-grouse, undermines the Service’s decision not to list the bird under the ESA, the organization said in a statement.

The DOI claims, however, that populations are still relatively large and these efforts will slow and then stabilize the loss of habitat.  According to the department, ranchers have already restored 4.4 million acres of sage-grouse habitat via the Sage Grouse Initiative with the Department of Agriculture expecting private conservation efforts to reach 8 million acres by 2018.

The non-listing decision doesn’t come as much of a surprise to many of the involved parties. Earlier this year, the FWS decided not to list the bi state greater sage-grouse because of proactive conservation that reduced long-term threats to the distinct species that lives along the California-Nevada border.  And just this month, the lesser prairie chicken, listed as threatened in March of 2014, was removed from the list after its population jumped 25% this year. A federal judge in Texas made the decision as oil and gas interests pursued legal action after last year’s listing decision. However the argument centers on how successful voluntary and collaborative conservation eliminates the need for a listing status.

New Conservation Bank Aims To Save The Roaming Sage-Grouse

Budget Deal Leaves Sage Grouse In Limbo. Can Private Conservation Do The Trick?