Carbon credits that reduce greenhouse gas emissions from deforestation and forest degradation were developed in part to save the tropical rainforests, but thousands of small forests outside the tropics can also add up to being major emitters if not properly managed. A new US bill targets these oft-forgotten gems – and could help kick global reduction efforts into high gear. 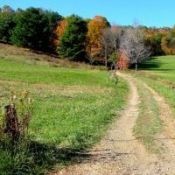 Carbon credits that reduce greenhouse gas emissions from deforestation and forest degradation were developed in part to save the tropical rainforests, but thousands of small forests outside the tropics can also add up to being major emitters if not properly managed. A new US bill targets these oft-forgotten gems – and could help kick global reduction efforts into high gear.

28 September 2009 | Have you ever found yourself wondering what your backyard is worth in carbon?

It may seem like a silly question – especially when deforestation in rainforest nations with millions of acres of tropical forest are spewing more CO2 into the atmosphere than any single industry – but small-scale deforestation in the developed world adds up. Now, eight US Senators have sponsored a bipartisan bill in the United States to supplement the American Clean Energy and Security Act, and aim to prove that small-scale forest projects are nothing to sneeze at.

S. 1576 – otherwise known as the “Forest Carbon Incentive Program Act of 2009” – would pay private forest landowners in the US to reduce greenhouse gas emissions via forestry carbon credits. The Act would use preapproved methodologies for sustainable forestry management, avoided conversion, afforestation, reforestation and revegetation.

The idea is to engage people who own small, forested plots of land that would otherwise be excluded from the carbon offset market. Participation in the market is often complicated and expensive, requiring participants to validate and verify offsets that are generated from engaging in climate mitigating practices on their property.

The Act has the potential to create significant greenhouse gas reductions, in addition to supporting co-benefits of biodiversity protection and community development in rural America.

Questions, however, remain as to how it will be executed. In particular, how will the government create verifiable forestry carbon offsets when, as stated by the American Forest Foundation, the Forest Act applies for those, “who aren’t able to participate in offset markets”?

Additionally, how would the USDA and EPA manage this specific program’s structure, and its co-benefits to biodiversity?

The key to the success of the Act will be to develop a simple methodology that will overcome the cost-prohibitive barriers currently preventing smallholders from entering the carbon market. Namely, the significant fixed costs associated with validating and verifying forestry carbon offsets by an independent third-party verifier. Equally important, the methodology must ensure verifiable results for the government and overcome the significant fixed costs of monitoring multiple smallholders’ parcels for compliance.

By executing the Act successfully, the government can then use the emission reductions towards consumer benefit programs – such as lowering the cost of compliance for industrial companies. They could also reinvest revenue from the sale of those forestry carbon credits into localized rural renewable energy development programs. Imagine if zip code by zip code, localized forestry carbon projects would generate revenues used to finance localized renewable energy projects.

How the Act Works

Forest owners who choose to participate in the Act would sign a contract with the US Department of Agriculture (USDA) to undertake an approved forest methodology in exchange for a given rate of compensation per acre for a minimum of 15 years. Additional incentives would be available for practices that ensure the protection of environmental benefits, such as protecting wildlife, enhancing water quality and local filtration, removing invasive species, and the restoration of habitats.

This process builds on programs already implemented successfully by the US Department of Agriculture, such as the Conservation Reserve Program.

The Department of Agriculture would then be responsible for monitoring the emission reductions and any potential reversals, which would result in a termination of contract and repayment. Findings of actual emission reductions and the economic efficiency of the program would be reported to Congress on a yearly basis, and incentive payments or other program guidelines would be subject to revision based on these results.

In terms of meeting that goal, there are 303,000,000 hectares of forestland in the US, the fourth-largest in the world, of which 30% is owned by private individuals and organizations, according to the United Nations Food and Agriculture Organization. Parties to the Act claim that 25% of these 91,000,000 hectares held by private individuals would not qualify for other proposed forestry projects, leaving approximately 22,725,000 hectares of land available for use under the proposed legislation.

To put this into perspective, the Garcia River Forest Climate Action Project, a 9,623 hectare conservation project in Mendocino County, California, is projected to sequester 4.2 million tons of CO2e over its 100-year life. In general, a seasonal forest in North America stores 132 ton of Carbon per hectare, meaning there are potentially three billion tons of carbon to be preserved under the proposed legislation.

In order achieve these goals under the Act, project developers need to ensure the delivery of real emission reductions via programmatic methodologies, which facilitate projects by creating step-by-step tools to guide developers in their design, implementation, validation, monitoring and verification.

Because of this, UN policymakers have been adapting policy mechanisms that allow for the perfect balance between the often-opposed values of accuracy and simplicity in developing a programmatic methodology. Progress in reaching an international climate accord has been slow, however – and the Act aims to get the ball rolling from the bottom up.

Part of the Process

That aim is, in many ways, consistent with the way forestry offsets are evolving internationally.

In fact, many researchers – and a growing number of policy-makers – have advocated a phased-in approach to a global REDD regime.

In the early phase, participants develop methodologies and monitor capacity at the local level. The results of these local endeavors are later scaled up.

Small-scale projects require simpler calculations because certain inputs can be assumed or ignored. This makes it possible discover what works on the small scale before adding in complexities for larger projects.

How the UN Does it

For example, the UNFCCC offers six simplified methodologies for small-scale afforestation and reforestation projects, which are defined by the UN as being those that create less than 16,000 tons a year in carbon emission reductions.

The typical manual describing methodology for a CDM afforestation/reforestation project (“CDM A/R”) runs to about 50 pages and requires not only a significant commitment of time and finance, but an in depth knowledge of project finance, statistical sampling and plant etymology.

These modified methodologies, on the other hand, are much simpler because they project implementation emissions and assume the most likely baseline scenario is the prior land-use to the start of the project.

Even these simplified CDM methodologies cover forests much larger than those covered by the Act, as the typical small-scale CDM A/R project is at least several hundred acres, and developed by NGOs or governments.

The Climate Action Registry (CAR), by contrast, asks that a forest entity owns at least 100 acres of trees.

If the aim of the Act is to capture the 25% that do not qualify for programs like the CAR, the forest must be less than 100 acres, and most likely owned by an individual.

The key is to develop a simple methodology for individual landowners that will enable them to select from a list of eligible practices, establish a baseline based on their location and size, begin project activity, and receive a flat rate of compensation per acre for their efforts.

The reporting requirements could even be handled by providing an adjusted gross income tax credit, reported annually to the Internal Revenue Service, and verified by satellite imagery using Google Earth. If successful, these payments for environmental services would not only stimulate the forestry industry, but also create a national micro-forestry effort where individuals could participate directly in the cause to stop global warming by mitigating climatic disruption.

Keeping it Real – and Weighing the Costs

Developing a simple methodology is just one side of the coin; the other is creating real emission reductions at a cost that justifies the payment to the individual landowner.

In the beginning, these payments will be difficult to determine without the availability of historical data. Because of this, an adaptive management approach is critical so that incentive payments stay competitive and the government stays on the path towards actual emission reductions.

With this in mind, a flexible, government-led program may actually prove to be more effective than its market-alternative, as a project’s development would be less subject to fluctuations in carbon prices.

A big question remains what the government will do with the credits once actual emission reductions are achieved.

Some ideas include using the benefits to reduce the cost of compliance for industrial sources. The proceeds can be passed on with stipulations, such as requiring them to utilize funds towards consumer benefit programs, or for the research and development of alternative energy.

Governments can also use the funds directly. An example of this can be seen with the Regional Greenhouse Gas Initiative, where member states signed a memorandum of understanding to allocate 25% of auction proceeds towards consumer benefit programs or investments in energy efficiency and renewable energy.

Another co-benefit developed by Act would be the boon to biodiversity. As forests are the primary habitat for many species, in many cases forest conservation and wildlife preservation are one in the same. Because of this, the Forestry Act would be a nice complement to State Wildlife Action Plans (SWAPs), which aim to proactively conserve wildlife before they become more expensive to protect in the long run. Enacted by Congress and funded through federal programs,

SWAPs are developed and implemented at the state level to reflect states’ unique local needs and priorities. Plans focus on preventing wildlife decline by focusing on habitat conservation, as well as educational programs to convey conservation practices to public and private landowners. SWAPs rely heavily on public and private partnerships to accomplish their goals. For example, New Hampshire’s Appalachian Oak Pine is home to the Blanding turtle population, and is also undergoing a high rate of deforestation due to development.

The SWAP calls for “innovative private and public partnerships to strategically conserve the refuge and movement corridors that are essential for the Blanding turtle’s conservation.” Therefore, by offering additional incentives for the preservation of Blanding turtle corridors through the Forestry Act, both parties benefit while keeping costs to a minimum.

The Act has the potential to help with several of our environmental problems. With a simple methodology and payment system, it could also be the way to build up the national and global forestry industry, beginning with individual landowners in the US.

With time, market participants would feel more comfortable entering a business environment with proven, effective methodologies and a paper trail of data – just as long as that paper didn’t come from cutting down trees.