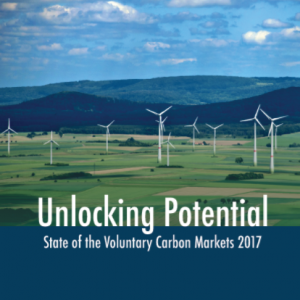 29 May 2017 | BARCELONA | With the United Kingdom on the brink of leaving the European Union Emissions Trading System (EU-ETS), the United States locked in the inertia of a Donald Trump presidency, and populism stoking fears of slackening commitment to meeting the climate challenge, support for carbon markets is coming from two once-unlikely sources: namely, risk-adverse corporate boards and China, according to the International Emission Trading Association’s (IETA) annual Greenhouse-Gas Market Sentiment survey, which was released last week at the Innovate4Climate conference in Barcelona one day after Ecosystem Marketplace’s latest survey of voluntary carbon market practitioners, Unlocking Potential: State of Voluntary Carbon Markets 2017.

Ecosystem Marketplace is published by environmental NGO Forest Trends, and the report identified transactions for roughly 63 million metric tons of carbon dioxide equivalent (CO2e) last year, including the 1 billionth metric ton transacted since the first State of Voluntary Carbon Markets Report in 2006. That represents a 24 percent drop from 2015, in part because two large participants failed to respond to the survey.

The total value was $191.3 million, and the report comes as governments around the world begin scaling up mandatory cap-and-trade programs to accelerate emission-reductions under the Paris Climate Agreement. In the past, governments have used voluntary carbon programs to incubate mandatory trading systems like the one currently underway in California. There are currently no plans for such incubation efforts, but the Dutch government recently became the latest government to formally endorse voluntary markets as a way to test new strategies and promote emission-reductions at home. At the same time, some voluntary offset types could be recognized under the aviation industry’s global cap-and-trade program, which kicks in after 2020.

State of Voluntary Carbon Markets author Kelley Hamrick appears as a special guest on this week’s Bionic Planet Podcast, which is available at Bionic-Planet.com as well as on iTunes, TuneIn, Stitcher, and elsewhere. You can also listen here:

The Need for a PR Offensive

The IETA report, which is built on a survey of 135 IETA members from across the globe and conducted by PwC, led to calls for a major “PR offensive” to counter populist rhetoric and anti-science propaganda, which reporter Jane Meyer ties to Koch Brothers, Richard Mellon Scaife, John M. Olin, and the DeVos and Coors families in her book “Dark Money“.

“The high of seeing the Paris Agreement enter into force last year was tempered by an increase in populist political movements that have pushed climate change down the agenda,” says IETA President and CEO Dirk Forrister. “While the changing political headwinds are cause for concern, we are encouraged by those that are stepping up to lead on climate action. Nationalism and isolationism won’t solve this global problem.”

Still, 77% of respondents said that climate change is a board-level priority, and 90% said board-level engagement has either increased or stayed the same in the past year.

On the voluntary carbon front, the majority of offsets sold came from programs that save endangered forests using mechanisms collectively known as REDD+ (Reduced Emissions from Deforestation and Forest Degradation, plus other land-use initiatives) and wind projects. Landfill methane projects followed as another top project type.

In addition to the above podcast, Hamrick will appear in two webinars we’re hosting on June 6th and 7th. For more resources and to download the free report, visit this page.