The Paris Agreement confounds those looking for a top-down, one-size-fits all global solution. That’s because it’s a framework within which workable solutions can emerge, and a recent analysis from the Wuppertal Institute offers a simple allegory for explaining that. Think of it, they write, as an old ship coming out of drydock. It’s a work of beauty, but it won’t sail itself. 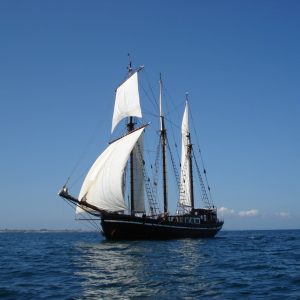 28 February 2019 | If you, like me, have struggled to keep up with new developments in the Paris Climate Agreement as it evolves from adoption to implementation, I encourage you to download the Wuppertal Institute’s new analysis, “Paris Agreement: Ship Moves Out of the Drydock.”

Technically, it’s not a summary of the Paris Agreement but an analysis of the Katowice Climate Talks that wrapped up in December, but this 27-page free paper offers as clear and simple a framework for understanding all of the moving parts that comprise the Paris Agreement as anything I’ve seen.

It works by weaving the agreement into an extended allegory about moving a ship from drydock (the rulemaking phase) to the high seas. The ship isn’t a modern ocean liner, but an old sailing ship with teams of rowers on the lower decks. These rowers correspond to the individual countries in the Paris Agreement, which means they have to both maintain their own strength (the NDC Guidelines) and work as a unit (Cooperation Under Article 6). You’ve got the guy who stands at the front of the boat and keeps the rowers on track (the Global Stocktake), and you’ve got the captain’s log (Transparency Framework).

The United Nations Framework Agreement on Climate Change (UNFCCC), in which the Paris Agreement is embedded, involves a whole slew of “Non-Party Actors” and “Pioneer Alliances”, and what does a ship have? Tug-boats that pull it into navigable waters. They’re here, too.

Finally, every good ship has navigators and lookouts – roles that the authors themselves step into at the end, when contemplating the future of year-end climate meetings known as “Conferences of the Parties.”

“The Conferences of the Parties should from now on assume less the role of a shipbuilder and instead move to the role of a ship’s captain,” they conclude. “The boat has been built, equipped with the relevant parts and most of the operational rules for setting the sails. Now is the time to set the course towards an effective protection of our civilization from the risks and dangers of climate change.”