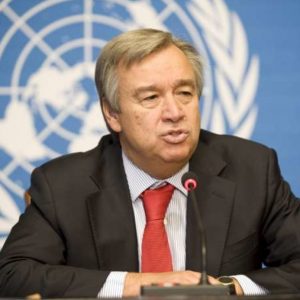 Guterres told delegations that the UN had made a difference in 2018 in the areas of: the search for peace diplomacy in countries such as Yemen, South Sudan, Ethiopia, Eritrea, Liberia and Armenia; the adoption of the Paris Agreement Work Programme during the Katowice Climate Change Conference; and the adoption of the Global Compact for Safe, Orderly and Regular Migration and of the Global Compact on Refugees in December 2018.

He noted that work intensified to reach the SDGs, with 102 States having presented Voluntary National Reviews (VNRs) so far to assess national-level implementation of the 2030 Agenda for Sustainable Development. On humanitarian aid, he reported that approximately US$15 billion coming from country contributions helped reach about 100 million people in need. He also noted that for the first time in the history of the UN, it reached gender parity within the senior management and among the candidates for the position of resident coordinator.

Guterres also highlighted initiatives launched in 2018, including the Secretary-General’s Action for Peacekeeping (A4P) initiative endorsed by 151 countries and four major organizations, and the launch of Youth 2030, the UN’s strategy for working with and for young people. On the UN reforms led by the Secretary-General, he said: the repositioned UN Development System is now in place, including a new Resident Coordinator system and a new generation of Country Teams; the UN peace and security architecture has been fortified to strengthen prevention, mediation, peacekeeping and peacebuilding; and new management capacities, structures and practices, including new levels of transparency, simplification and accountability will underpin these changes and “deeply transform” the UN.

On the work ahead, Guterres stressed the need to accelerate the “surge in diplomacy,” and to strengthen partnerships. He said “there can be never room for hate speech, intolerance or xenophobia,” and called for investing in social cohesion, education, new skills for people to adapt, and safety nets for those that risk to be left behind. He announced that the UN will continue to strengthen its partnership with the African Union (AU) in order to consolidate gains towards peace, adding that lasting peace must be based on a broad consensus of society, “with women as full participants in all peace processes.”

Guterres asked to dramatically accelerate efforts on key 21st-century challenges, namely: the fight against climate change; achieving the SDGs; and stepping up new technologies that can “turbocharge” this work. Further on climate change, he remarked that by 2020, under the Paris Agreement, Member States are meant to assess progress and submit new pledges to meet the goals to which they agreed. In addition, by 2050, net zero global emissions should be reached. On technologies, he indicated that “later in 2019” his High-level Panel on Digital Cooperation will report on proposals for reducing digital inequality, building digital capacity and ensuring that new technologies are on “our side and are a force for good.”

In an interactive discussion, countries highlighted the need to protect and strengthen multilateralism, and welcomed the UN reforms led by the Secretary-General on development, management and peace and security. Many UN Member States also referred to the high-level events that will take place in September 2019 during the UNGA’s annual General Debate, including the UN Climate Summit, the High-level Dialogue on Financing for Development, and the ‘SDG Summit.’ They stressed the need to renew and reaffirm commitments towards the 2030 Agenda and combatting climate change.

Thailand for the Association of Southeast Asian Nations (ASEAN) said the theme of Thailand’s 2019 ASEAN chairmanship is ‘Advancing Partnership for Sustainability,’ and this reinforces the idea that multilateralism should be protected. The EU stressed the importance of universal values, respect for rule of law, promotion of human rights and human dignity, and for a UN that is tailored to new challenges, in line with the UN reforms.

Thanking other countries for their words of comfort and condolences following the terrorist attacks in Kenya on 15 January, Kenya stressed the importance of working closely together to tackle the “global phenomenon” of terrorism. South Africa reported that the relationship between the UN and Africa has strengthened, including through the Joint UN-AU Framework for Enhancing Partnership on Peace and Security, and the AU-UN framework for the implementation of Agenda 2063 and the 2030 Agenda for Sustainable Development.

Referring to challenges with the UN’s financial situation, the US suggested reforming its budget process and improve its ability to better manage resources to deliver on its mandates. Afghanistan stressed the need to find new ways to implement UNGA and UN Security Council resolutions, noting that their implementation “remains weak.”

On climate change, Fiji noted that climate action speaks to all areas of the UN reforms and, if not addressed could be an “extreme threat” to all the SDGs combined. Chile underscored the importance of addressing climate change, and noted that the 25th session of the Conference of the Parties to the UNFCCC (COP 25) will take place in Santiago.

On efforts to implement the 2030 Agenda, Mexico said his president signed a decree through which all the country’s public and social policies will be inspired by and based on the 2030 Agenda. Colombia said the SDGs are a guide to “administrate globalization” and to ensure the effectiveness of multilateralism, adding that his country has incorporated the 17 SDGs into its domestic policy, and the Goals are considered permanent guidance for public policy in Colombia.

On migrants and refugees, Mexico said his country is the first or second largest corridor in the world for migration, and it will take the Global Compact on Migration as a basis for its legislation and policies. Jordan called on the UN to continue to support countries that host refugees.

This story has been compiled from press releases