Papua New Guinea and Tanzania are two forested nations receiving international finance to reduce emissions through forest conservation, though funds flowing to Tanzania have all but dried up. New data from Forest Trends explores different faces of the same problem in these countries, identifying crucial gaps in REDD+ financing. 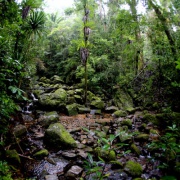 This article was first published in Mongabay.

28 March 2016 | Papua New Guinea and Tanzania are both REDD+ countries, meaning they’re participating in the UN program officially enshrined in the Paris climate agreement that aims to channel international finance to conservation activities that reduce carbon emissions associated with deforestation and forest degradation.

Through its REDDX initiative, Washington, D.C.-based NGO Forest Trends has been tracking financial commitments and disbursements made through REDD+. The group found that while Papua New Guinea (PNG) and Tanzania must meet significantly different challenges, both help identify crucial gaps in REDD+ funding.

About $45.3 million was invested in PNG for REDD+ activities between 2009 and 2014, according to a report released by Forest Trends this week. More than 60 percent of those funds, some $27.2 million, were contributed by donor governments, including Australia, Japan, Germany, Norway, and the United States.

Multilateral funding agencies like the UN-REDD Program itself and the World Bank’s Forest Carbon Partnership Facility provided nearly a quarter of REDD+ funds received by PNG, Forest Trends found, while supranational institutions, in particular the European Commission, supplied another 15 percent.

Financial commitments to PNG got off to a slow start, but finally began in earnest in 2012 and continued to grow in 2013 and 2014. Actual disbursements of those committed funds gradually increased between 2011 and 2014, as well. 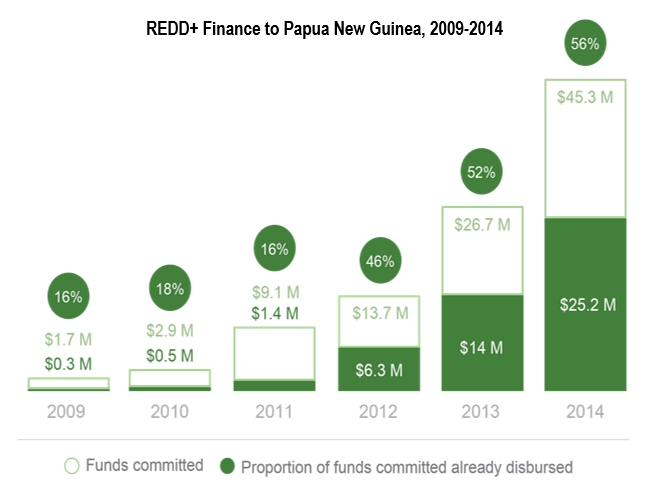 Still, according to ForestTrend’s Brian Schaap, REDDX senior program associate, far more commitments need to be made to PNG, given that the tropical forests of New Guinea are the third-largest in the world after the Amazon and Congo basins.

“While funding commitments grew consistently over the six-year period, the $45 million in total finance committed thus far is not commensurate with the scale of Papua New Guinea’s forest resources, and more finance is needed to incentivize conservation of this national and global treasure,” Schaap said.

PNG has not yet developed a national REDD+ strategy, according to the report, though “fast-start proposals through bilateral and multilateral support are gradually creating the enabling environment for REDD+ implementation” through policy reviews at the national level and various pilot programs at the local and jurisdictional level.

This important because, though PNG does have strong forestry regulations, they are not well implemented or enforced. “Therefore significant reforms to land and forest management regimes including governance are needed in order to prevent poor governance and enforcement from derailing effective REDD+ implementation,” the authors of the Forest Trends report write.

Addressing these concerns is all the more urgent as Forest Trends found a positive trend in terms of increasing commitments from donor governments and multilateral and supranational institutions, right up to 2014 and beyond. Not only will those donors expect to see results, but better governance could also encourage more involvement from the private sector, which so far has had limited engagement with REDD+ programs in PNG.

“Private sector financing will become increasingly important in the future as costs for addressing climate change increase,” per the report. “Therefore, creating the enabling environment for private sector investment and fostering meaningful public-private partnerships will be essential.”

Tanzania, on the other hand, has had almost the exact opposite trajectory. Another Forest Trends report shows that after an initial infusion of funds in 2009, primarily from Norway, REDD+ finance has stagnated. No new funding has been committed to Tanzania since 2010, and this uncertainty has halted progress on key REDD+ forest conservation initiatives.

“Following a jolt of funding from Norway that jump-started Tanzania’s REDD+ process in 2009, progress has now come to a stand-still, and, unless donors renew their commitments to support forest conservation in the country, the progress made early on will begin to erode,” Forest Trend’s Schaap said.

Some $93.8 million, more than twice the total funds made available to PNG, have been committed or disbursed to Tanzania — $80.2 million of it from Norway in 2009, with smaller amounts from Finland and Germany in 2010. The UN-REDD program contributed $4.2 million in 2009.

More than 80 percent of those funds have now been disbursed to the country, and the majority went to NGOs and academic institutions, Schaap and team found. The government of Tanzania took less than one-fifth of the funds, far less than what most REDD+ country governments usually receive. PNG, for example, is using as much as 68 percent of incoming REDD+ funds to build its own capacity to foster effective conservation activities.

This raises concerns that insufficient funding has gone to support government capacity building in Tanzania, according to the REDDX report, which could be one reason investors are hesitant to direct more financing the country’s way.

As with PNG, Schaap and team suggest that a lack of diverse sources of REDD+ financing must also be addressed to ensure the future of Tanzania’s efforts to protect its forests and the global climate: “The challenges of non-continued funding that Tanzania is now facing highlight the need for this type of finance supporting forest conservation to come from multiple sources.”