When Donald Trump won the US presidential election, climate optimists said US cities and states would fill any leadership gaps that opened at the federal level. Now six US states have agreed to track and disclose greenhouse gas emissions under the Global Compact of States and Regions, and to meet the Paris Agreement targets. 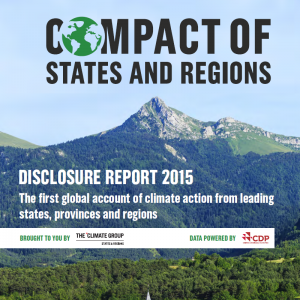 4 December 2017 | Even if US President-Elect Donald Trump pulls the United States out of the Paris Climate Agreement, more than two dozen of the the country’s 50 states have programs in place to continue reducing emissions, and many governors have pledged to reduce their emissions in line with the Paris Agreement’s target of keeping the rise in average global temperature below 2°C (3.6°F). Six states have even begun submitting their emission statistics to a global disclosure report published by the Compact of States and Regions –  submitting themselves to the kind of scrutiny and comparability called for in the Paris Agreement.

The report gathers state and regional disclosures from 62 jurisdictions around the world representing US$12.9 trillion in GDP, or 17% of the global economy, and generating the equivalent of 3.1 gigatons of carbon dioxide, which is more than India and Canada combined.

Of the six US states – California, Connecticut, Minnesota, New York, Oregon, and Vermont – one of them (Connecticut) has already achieved its 2020 target, while another (New York) is 8% below its baseline 1990 emissions. California and New York are also the headquarters of the Western Climate Initiative and the Regional Greenhouse Gas Initiative, respectively – two cap-and-trade programs spread across several US states and Canadian provinces.

The disclosure includes all states’ greenhouse gas reduction targets for 2020, 2030, and 2050, as well as their baseline years and progress towards their targets as of 2015.  Some states don’t yet have official interim targets, but all are encouraged to develop them.

Why Cities and States Matter

After the election of Donald Trump, participants in climate talks in Marrakesh, Morocco told Ecosystem Marketplace that  cities and states would fill any leadership gaps that open up in Washington, and many reiterated their views on the Bionic Planet podcast, which is available on  iTunes, TuneIn, Stitcher, and here:

This year, the number of governments involved in the Compact grew by more than 40%, disclosing almost 1300 sector specific climate actions that will reduce per capita carbon intensity roughly 65% by 2050, from nearly 10 tons of carbon dioxide equivalent per person to less than four. Like the Paris Agreement, the Compact encourages states to ratchet up ambition over time, and it will continue to generate reports annually.

One thought on “Which US States Are Already Honoring The Paris Climate Agreement?”