In 2007, Mark Lynas’s “Six Degrees: Our Future on a Hotter Planet” provided a grim summary of all known climate science. Now, he’s updated the book, and the news is even more dire. 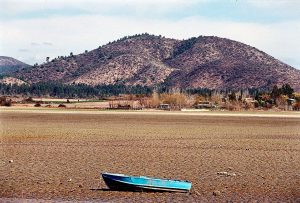 15 July 2020 | The story of our warming planet can be told by degrees. The global thermostat has gone up 1 degree Celsius since the Industrial Revolution, and rivers of meltwater are now coursing off Greenland’s glaciers. Two degrees could mean crop failures and 500,000 deaths from malnutrition a year. Three degrees would be a hotter world than our species has ever experienced: The last time the temperatures rose that high was 2 million years before the evolution of homo sapiens.

Creep up another 2 degrees, and it could lead to the greatest mass extinction in earth’s history. To paraphrase Ron Burgundy, things escalate quickly.

If you are like most people, you have a sense that climate change is bad, but would be hard-pressed to explain the exact consequences of each additional degree of heat. A few degrees of warming doesn’t sound that bad, maybe no more dangerous than nudging up your thermostat. So at what point do sweaty summers and mild winters turn into extinction and the collapse of civilization?

A new book fills that knowledge gap: Our Final Warning: Six Degrees of Climate Emergency by Mark Lynas, an influential environmentalist in England. Lynas is known for his ability to spin stultifying scientific evidence into compelling prose and for conducting long-simmering public debates with other public intellectuals. Back in 2007, Lynas published another book, Six Degrees: Our Future on a Hotter Planet, but in the intervening years the climate changed so rapidly that he decided it needed not just an update, but a top-to-bottom rewrite.

As of 2015, a world warmed by 1 degree is reality, not a speculative future. Sea levels have climbed 6 centimeters, and evidence that fossil-fuel emissions are amplifying hurricanes has solidified. There’s so much new evidence that Lynas had to start over and write an entirely new book built on the same structure as the old one.

Lynas recently spoke with Grist about how much has changed in the last 15 years, how the COVID 19 pandemic resembles climate change, and how he manages to live happily while carrying the knowledge of looming doom.

Q.There was a similar magazine piece to your book that got a lot of attention in the States by David Wallace Wells, which came under criticism for conflating the worst-case scenarios with the likeliest future. How did you deal with the tension between telling a gripping story and being rigorous about facts?

a.The beauty of using 6 degrees of warming as a framing is you can have it both ways. It’s a grippingly terrifying story because you’ve got a strong narrative going from the relatively moderate 1-degree world up to the utterly terrifying 6-degree world, and you can read it almost like a novel as those worlds unfold. I’m not saying that we will ever see 6 degrees; that’s a product of decisions we have yet to make. I just think it’s useful to get outside these polarized debates about what the future will bring, because that’s not actually the question. The question is: What will happen if we do X? I don’t have to address the question of how likely it is, that’s a collective decision humanity will make over the next few decades.

Q. One of the scariest things you mention is the positive feedbacks, where, for instance, a world with 4 degrees of warming melts the Arctic permafrost, which could release enough methane to bump us up to 5 degrees.

a.Yeah, and that’s probably what David Wallace Wells would point to. Even if we are not going to quadruple our coal consumption, we still face the possibility of crossing these tipping points which make the global heating process unstoppable. Perhaps I’m more nuanced on that than I was in the first book: Some people thought that it was saying that if we crossed 2 degrees it would trigger a tipping point which would get you to 3, and then a tipping point which takes you to 4 like a line of dominoes. It’s not quite like that because we are not sure where the tipping points are, and because it takes time for them to play out. That Arctic permafrost is meters thick, it takes decades to melt, rot, and hit the atmosphere, and then decades more for that to turn into warming and then melt more permafrost.

On a lot of these tipping points, we are talking about centuries. For instance, I think we have already crossed the tipping point where the melting of Greenland has become irreversible, but it will still take centuries to unfold.

a.I’m a pretty strong climate hawk I would say. If we want to save even a semblance of the world’s coral reefs, we have to stay on a 1.5 degree pathway, even 2 degrees leads to the bleaching of something like 99 percent of coral reefs. The saddest things for me are the annihilation of our biological inheritance — rainforests, coral reefs, the Arctic. You can argue that humans can survive perfectly happily for the first couple of degrees. But for me, it’s nonetheless profoundly important, and something I’m quite happy to spend my entire life advocating on.

Q What about the scenarios that might not lead to the collapse of civilization but that would create mass suffering among people without access to air conditioning in, say, South Asia?

a.The date at which we make parts of the world uninhabitable because of extreme heat keeps coming forward. The first research on this put that date within a 5-degree scenario. It’s now between 3 and 4 degrees. We’ve already been close to conditions that make it lethal to stay outside in some parts of the Persian Gulf — just about touched it for a few hours. It wasn’t supposed to happen for another 2 or 3 degrees. That suggests it’s going to come more quickly. In terms of human consequences, the two issues that stand out are extreme heat and food production. I’m not confident that we can adapt the world’s breadbaskets to survive even 2 degrees warming.

Q. How does this grim knowledge make you feel day to day? Does it make you depressed, energized, or what?

a.I’ve been through all that stuff. I’ve had my periods of depression and profound sense of loss. To be honest, I’m so used to it, I don’t find it difficult to cope. I’m quite good at compartmentalizing. And these aren’t immediate things — it’s not the same as a war or pandemic, so you can actually forget about it for a bit.

Q. Do you see a parallel with the COVID pandemic?

a.The pandemic is like climate change on warp speed. The cause and effect are much more closely linked.

The lockdown is also a bit like the need to change our lifestyles to reduce carbon. So we stopped the flying, we change our diets, we make the sacrifices needed to bend the [carbon] curve. And then in the longer term, you’ve got the prospect of a vaccine. The climate parallel is technology substitution: You can replace dirty power with clean power, you can find ways to do zero-carbon travel. Those all take time, so in the short term, yes, we need to stop flying, but you can’t maintain lockdown forever, either for this virus, or for climate change.

Q. It sounds like you see both a need to live more simply, and embrace technology?

a.Well, the living simply thing isn’t going to work in the long run. The part of the world that is living simply, namely sub-Saharan Africa and other places way below the poverty line, don’t want to stay in that condition. It’s not a viable argument in a practical or even moral sense. Yes, it’s a lifestyle choice for certain people, but to pretend even for an instant that it’s a climate solution is insane.

a.I do, but only in the short term. Remember you can only sustain things by moral exhortation for a short period of time, and then people tire of it and move on. Like with the lockdowns, it’s a matter of months really. I think the same thing will apply to climate. Look, there are technologies available that would allow us to decarbonize and continue to grow prosperity, especially in the developing world.

Q. But in this book you are just laying out the consequences. You don’t propose solutions.

a.I just thought, fuck that, I wrote that book five years earlier, called Nuclear 2.0 It’s got a whole strategy mapped out for a transition to renewable energy and nuclear, etcetera, etcetera. Plus, I’d never be able to sell the book in Germany if I mentioned the “N” word. I would rather have a book that could be read by a wider group of people and allow them to then investigate solutions in whatever way they want.

This interview has been edited for length, accuracy, and clarity.

Nathanael Johnson (@savortooth on Twitter) is Grist’s senior writer and the author of two books.

Photo by Luis Paredes from FreeImages

This story is published as part of Covering Climate Now, a global journalism collaboration strengthening coverage of the climate story. It first appeared in Grist.