We’ll meet the COVID challenge by improving our current treatments and practices, not by either jettisoning them or letting the disease run its course. Here’s how that same logic applies to climate change. 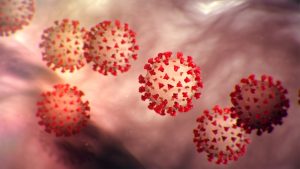 2 April 2020 | COVID-19 has flattened the global economy, and it will hurt countless people before we flatten the curve. That, however, hasn’t stopped some from declaring this human tragedy an ecological “blessing” that could also save a lot of lives if it ends up supporting both national climate policies and the Paris Agreement.

Aside from a shared sense that this tragedy can be harvested for good, however, there’s little agreement on how, exactly, this awakening will happen. Some, for example, argue that our global response to COVID-19, if successful, can provide some sort of nebulous energy for tackling climate change. Others argue that we’ll solve our problems by letting airlines and fossil fuel companies die so we can start from scratch. Neither of these notions really takes stock of the existing “vaccines” and “treatments” already being brought to bear in the effort to end climate change, and that could be a tragedy in itself if it means this moment is allowed to pass.

I’m skeptical of those who argue this crisis will automatically turn climate skeptics into climate warriors, but I do believe this moment can be leveraged to provide more general support to a greener economy and to meet the goals of the Paris Agreement through a more aggressive application of existing economic, governmental, and technological “treatments” combined with the organic behavioral changes we’re already making in response to COVID-19.

One reason to believe people will feel more motivation to act is that our negative impact on the environment has drastically decreased, and many of us are directly experiencing clean air and reviving nature around us. In China, climate policy has actually historically been driven more by a need to reduce air pollution than to mitigate climate impacts. This already led to more solar energy and less coal-powered energy. In recent weeks, the sky has been visibly cleaner over China, northern Italy, South Korea, and even the United Kingdom, satellite images showed. 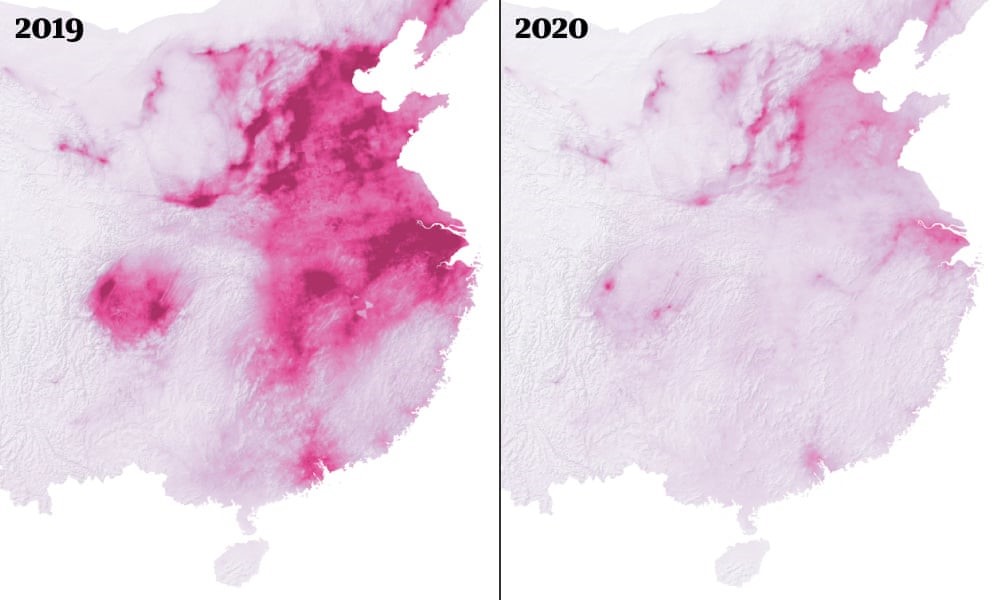 To be clear, these visible reductions mainly concern NO2 emissions (nitrogen oxide) and not greenhouse gasses, but they come from the same sources that also emit greenhouse gas: power plants, factories and motor vehicles.

Here in the Netherlands, with the high population and roads density and busy airport hub, there was clearly less noise nuisance, less nitrogen, a bluer sky and less CO₂.

Last year, in the “Urgenda” climate ruling, the Supreme Court of the Netherlands ruled that the government was responsible for reducing the country’s greenhouse gas emissions to a level 25 percent below 1990 levels by the end of 2020 instead of its legally binding 20-percent target – a feat that’s inconceivable without extra expenses. In China, however, CO₂ emissions fell 25 percent, or by100 billion metric tons of CO₂, as a result of the country’s response to COVID-19.

The combination of lower CO2 levels, less capital in business sector and available carbon offsets may offer a welcome vaccine to meet a low carbon economy sooner that we thought. Hence, the deep crisis may teach us not to make climate policy solely a political clash, but a positive and sensible change – a new “business as usual”. Let’s be more pragmatic: the antidote is here!

How do we Make the Change Sustainable?
Trend watcher Li Edelkoort advises us to go through the COVID-19 crisis in a sort of “consumption quarantine” that becomes a “blank page for a new beginning…[that involves] less consumption and less, but cleaner production.”

It’s an admirable ambition, but history shows that this doesn’t happen automatically.

The 2008 financial crisis, for example, also raised hopes for a green re-set, but that re-set failed to materialize. Yes, global CO₂ emissions from fossil fuel combustion and cement production fell 1.4 percent during the crisis, but they rose 5.9 percent when it finished.

This is a pattern we’ve seen after several previous crises, each of which came with declarations of a new, green future. 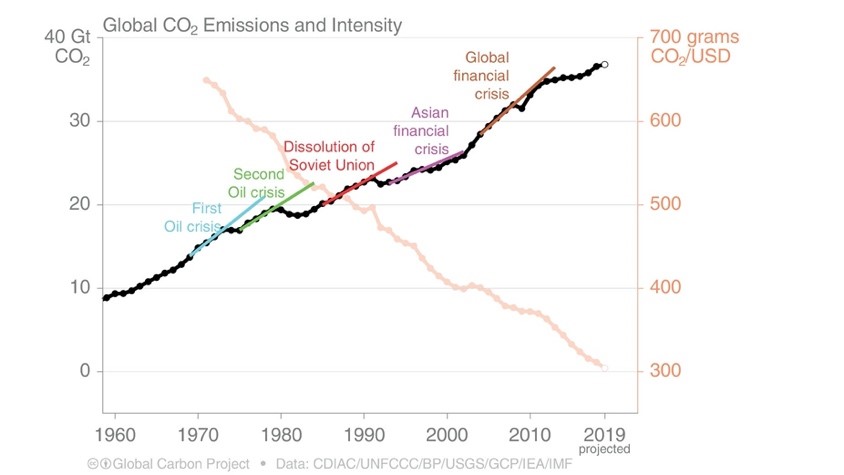 Governments have stepped up to rescue key industries and jobs, but future support should be offered with an eye on accelerating a low-carbon restart. This means attaching sustainability conditions such as the use of renewable energy or adoption of energy efficiency strategies that lead to cleaner air quality and new jobs. The head of the International Energy Agency, Fatih Birol, and the World Resources Institute have already called on countries to put renewable energy at the heart of their stimulus plans to emerge from the crisis.

CO₂ Emissions Trading Systems Support Long-Term Sustainability
The turmoil in the financial markets is also impacting emissions trading. The price of an emission reduction representing a ton of CO₂ either kept out of or removed from the atmosphere under the European Union Emissions Trading System (EU ETS) fell in two weeks from €24 to just under €15 euros. In the United States, California Carbon Allowances (CCAs) traded below the floor price for the first time in nearly three years. The Mar-20 V20 CCA contract tumbled to $16.48, a 25-cent drop on the ICE platform because there are fewer CO₂ emissions, and as a result the demand for offsets has decreased. At the same time, companies are unloading allowances and offsets to meet their cash-flow requirements, accelerating the price drop.

We may have low price levels for months into the future, and this will not impact the environmental integrity of these programs for now because the overall budget of allowances will ensure targets are met. Lower price levels make it a bit easier and cheaper, which is also suitable in times of shrinking economy.

The COVID-19 challenge is different from the 2008 financial meltdown because it’s based on a real-world event rather than a structural flaw in the financial system. Because of this, we can expect a rapid recovery once the COVID-19 crisis is over. To prevent an oversupply from accumulating and then driving down prices in the recovery, the EU uses a so-called “Market Stability Reserve” to reduce the number of allowances auctioned. There is simply less auctioning with a surplus, so that the CO₂ price will recover again next year. In California the price floor keeps prices from falling too low as well.

Long-term expectations for cap and trade are still positive, and the European Commission will even propose to increase the CO2 target for 2030 to 50 to 55 percent to comply with the Paris Agreement. This is supported by most EU member states. Ultimately, the number of allowances will decrease, fewer allowances will circulate every year.

Let’s take a look at just one sector: aviation. Research agency CAPA expects that without support airlines will go bankrupt at the end of May. Indeed, flights from European airports are down anywhere from 50 percent to 88 percent.

EU and US governments understandably focused their first rescue on life support and job preservation, but I see further state aid as an indispensable opportunity to make aviation more sustainable by promoting the use of cleaner fuels and more fuel-efficient aircraft and practices.

I’m in the camp that believes we’ll fly less in the future as distributed working and virtual conferences become the new normal – in part because we’ve gotten used to it, but also because of budgetary constraints after economic activities begin to pick up.

Governments can anticipate this in their next round of aid packages – insisting, for example, on airlines prioritizing the use of newer, more fuel-efficient aircraft and low-emission fuels. The Dutch national carrier, KLM, already plans to take the old, polluting Boeing 747 out of service – why not insist they do it a year earlier?

We can also make any future aid contingent on reduced future emissions, which any reductions that can’t be achieved organically being achieved by high-quality offsets.

CO2 Vaccines are Required, as Well as Behavioral Changes
In summary, the COVID-19 crisis offers the opportunity to come out greener, but that is certainly not automatic. The parallels are, however, striking.

A vaccine is required for COVID-19 – an inhibitory drug that prevents it from taking hold again – but so are behavioral changes, including better treatment of animals.

For the climate test, “CO2 vaccines” are required, as well as behavioral changes. Airlines can adopt better practices and offset those emissions they can’t eliminate, but we can all fly less.

In this way, we can turn Li Edelkoort’s “consumption quarantine” into something permanent.

Jos Cozijnsen is an attorney focused on greenhouse gas emissions and a Carbon Specialist with the Carbon Neutral Group, which is an environmental consultancy focused on net-zero climate solutions.

Before entering the private sector in 2019, he represented the Netherlands in global climate negotiations leading up to the 1997 Kyoto Protocol and served as a member of the international team of the Environmental Defense Fund (EDF) to international climate meetings.

He also initiated the new Dutch domestic carbon credit system, which will see the first certificates issued this year.