In a first-of-its-kind case, Swedish Administrative Courts ruled certification through the Myanmar Forest Products Merchans’ Federation did not prove that wood imported into Sweden was harvested legally. The ruling has a host of implications for timber regulation in the European Union, and likely will raise the bar in the United States regarding Due Diligence on imported timber, Forest Trends’ Jade Saunders explains. 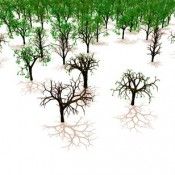 23 November 2016 | Swedish Administrative Courts earlier this week ruled that a certificate issued by the Myanmar Forest Products Merchants’ Federation (MFPMF) did not provide adequate proof that a shipment of teak imported into Sweden had been legally harvested. The court’s verdict follows nearly a year of injunctions from Swedish authorities and an appeal by the company, which had imported the teak via a Singapore trader in violation of the EU Timber Regulation (EUTR).

The company in question, Almtra Nordic, was fined 17,000 Swedish kronor (US$1,700) and has informed Sweden’s EUTR regulator that under current circumstances it will no longer source wood from Myanmar.

Notably the ruling does not suggest that importing wood from Myanmar into the EU is illegal, only that importers need to be able to establish exactly where in the country the wood products were harvested, by whom, and develop robust systems to demonstrate that the necessary risk assessment and mitigation measures have been completed. The ruling was based on a judgement that the collection of standard MFPMF paperwork does not represent adequate Due Diligence. Although not a formal precedent, the principle established will likely be respected by other courts in Sweden as well as the rest of the EU when judging whether companies have the necessary systems to avoid buying illegal wood.

This case is the first in which a court has determined that the certificate issued by MFPMF is not sufficient. Since a number of other cases involving teak from Myanmar are likely to conclude in other European countries in the near future, companies and enforcement officials across the EU have taken note of the case.

Buyers of Myanmar timber products have often used what is commonly known as “the Green Folder” to demonstrate that their purchases comply with Myanmar’s forest laws. The folder compiled by MFPMF typically includes permits issued by the Myanmar Timber Enterprise (MTE), the sole official seller of Myanmar logs, together with other official documentation relating to export. The Swedish Courts, however, ruled that these documents were insufficient to prove a negligible risk of illegality. In particular, it upheld an earlier finding by the Swedish EUTR regulator that the MTE documentation fails to provide critical information on the origin of the logs, the logging company involved, and compliance with Myanmar’s forest legislation – all necessary to determine whether any product is legal. While the forest areas where the timber had been logged were identified in the folder, documentation clearly tracing the timber supply chain from the point of export back to the forest of harvest was found to be lacking. The absence of a clear chain of custody from point of harvest allows for potentially illegal wood to be laundered into a legal supply chain.

According to the EUTR, companies should consider whether there is a high risk that illegal timber can enter their supply chains by assessing the prevalence of illegal logging in a source country, the accessibility of official information, and/or the presence of armed conflict which frequently is associated with natural resources, including timber. European Commission (EC) Guidancepublished earlier this year also directs companies and enforcement officials to consider national levels of corruption. When sourcing from countries with significant illegal logging and evidence of corruption, importers must take measures to reduce the risk of illegality in their particular supply chains to a negligible level. Letters obtained from the Swedish regulator and translated by Forest Trends assert that wood from Myanmar is high risk due to levels of corruption and administrative problems in the country, armed conflicts in many regions where wood is harvested, and evidence of illegal harvesting.

Acceptable risk mitigation strategies highlighted in the ruling include the use of field inspection by third parties, independent audits, and appropriate scientific techniques for tracing the origin of timber, for example using genetic markings or stable isotopes whose physical properties can point to where wood was harvested.

While this court decision and recommendations will have obvious implications within the EU, they are also likely to impact US imports from Myanmar by raising the bar for expectations of Due Care under the Lacey Act.

In August, the Government of Myanmar imposed a nationwide logging moratorium, recognizing the damage to forests from decades of overharvesting. This pause provides breathing space for Myanmar’s forests. At present, however, the moratorium is only temporary, expiring in March 2017 for most of the country’s forests. Experience in other countries has shown that such time-bound logging bans are unlikely to result in meaningful change.

Forest Trends recommends that the Myanmar Government adopt firm policies to reform the forest sector and scale up the national reforestation policy. Logging should resume only when the forests have sufficiently recovered and the relevant institutions have adopted systems that ensure verifiable legal and sustainable forest management. Without such reform, the current moratorium will only “press pause” on Myanmar’s timber troubles rather than effectively address them.

In response to press comment on the ruling the Myanmar Forest Department sent Forest Trends a statement concerning government controls of timber harvesting, which recognized the problems faced by responsible companies wishing to buy timber from Myanmar and set out a constructive approach to reforming the sector.

In the interests of transparency the statement is set out in full below.

“We believe that our current control systems are capable of tracing all our timber exports back to specific forest areas and also of demonstrating that such products have been legally produced.  However multiple timber sources and lack of segregation in processing facilities mean that documentation that demonstrates chain of custody is not always accessible.

“We are committed to improving our systems so that our exporters can clearly demonstrate to their customers that all our timber product exports comply with our laws. That’s why we have developed our Myanmar Timber Legality Assurance System and, with FAO and EU support, are now analysing the gaps between this system and what is required to demonstrate that our timber products have been produced in full compliance with our laws.  We have declared a moratorium on all logging for the 2016-17 fiscal year, and when logging starts again, we intend to take action that responds fully to the findings of the gap analysis. Moreover, when logging restarts, the harvest level will be more than 50% lower than the current legal harvest levels. This will make it easier to introduce any necessary improvement to our systems.

Illegal timber we confiscate in the course of enforcement activities will now be used only in the domestic market and not available for export.

Strengthening our Timber Legality Assurance System is a first step towards implementing a Forest Law Enforcement, Governance and Trade (FLEGT) Voluntary Partnership Agreement, which we intend to start negotiating with the EU in 2017.”

Jade Saunders is a Senior Policy Analyst at Forest Trends. She has been an Associate Fellow of the Energy, Environment and Development Programme at Chatham House since 2002, working extensively on forest governance.