Guatemalan forest communities living within Central America’s most intact rainforest are on a journey to become sustainable and self-reliant, and they’re relying on the Maya nut, long treated as a staple food across Latin America and even beyond, to help them achieve both. 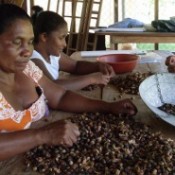 28 March 2017 | The Maya nut, which grows wild on giant tropical fig trees across Latin America, is something of a wonder food that has provided substance for local people since ancient times.

“I’m always wary of the term ‘super food’, but Maya nuts are pretty extraordinary in the combination of benefits they pack,” explained Jacob Olander, co-founder of online sustainable trading platform Canopy Bridge, in an earlier article. “They provide for health and nutrition at both ends of the supply chain, both for consumers and for the communities that produce them, and their sustainable harvest can be a powerful tool for conserving imperiled tropical forests.”

While the Maya nut’s trees are more likely to be felled than cultivated by foresters or farmers these days, the nut may be making a comeback as forest communities search for economic opportunities that also keep the forest standing. In a consumer age where sustainability and nutrition increasingly matter, some groups see the Maya nut as a valuable commodity that they could market globally.

The Association of Forestry Communities in Peten (ACOFOP) is one such group. It helps local people develop their economic and political control over the Maya forest in Peten, Guatemala, and is sustainably managing 120,000 hectares of native forest for Maya nut production – helping it become one of three finalists in Canopy Bridge’s Innovative Experiences contest.

But ACOFOP’s plans for the Maya nut are just beginning, says Julio Madrid, Non-timber Forest Products Manager with ACOFOP. The group has plans to produce at an industrial level, and it’s on its way to financing and building the necessary infrastructure.

Just getting to this point, however, hasn’t been easy. It involved several years of effort and decision-making centered on carving out a sustainable future, one that allowed the forest to thrive alongside its people.

“Seeing the benefits of harvesting the Maya nut really helped people recognize that trees could be more valuable standing than cut down,” says Madrid.

ACOFOP grew out of a 1990s movement empowering forest communities after encroaching deforestation from farmers and loggers had become so intense that the Guatemalan government established the Maya Biosphere Reserve in 1990 to protect their chunk of Central America’s most intact and biodiverse rainforest. The reserve spans 2.1 million hectares encompassing protected areas, a buffer zone and multiple-use zones, which allow limited timber and other forms of harvesting.

Guatemala’s creation of the reserve quickly sparked a movement among the communities living within it for better access to the forest’s resources, and in 1995 the forest-dwellers formed ACOFOP.

The association sought to diversify the region’s activities immediately but it wasn’t until 2012, with support from the Rainforest Alliance and the Germany development agency GIZ, that it opted to map the value chains of three non-timber commodities that could serve as sustainable alternatives to chopping down trees.

The mapping initiative explored three products: honey, a natural gum called chicle and the Maya nut, and concluded the Maya nut has hidden talents and holds significant potential as a commodity.

A Super Nut that’s not really a Nut

The Maya nut, also called breadnut or ramón among several other names, is low-fight, gluten-free, and rich in protein, calcium, potassium, zinc, and iron, as well as vitamins A, B, C and E. Throughout history, people have relied on the seed to survive drought, war and famine because it never becomes rancid, says Erika Volhman, the Director of the Maya Nut Institute, a nonprofit that works to promote traditional use and knowledge of the food. It even has medicinal powers because the calcium-magnesium components can help ease arthritis and osteoporosis. And, because it’s wild-harvested – the bright green seeds fall off the trees – it keeps the forest intact, which has climate, biodiversity and water benefits.

And while it may be a super food, it’s actually a drupe, but “nut” sounds more appealing, Vohlman says.

People do still use the nut as livestock feed, but the Maya Nut Institute and ACOFOP are aiming to expand on this modern-day custom and market the nut for human consumption.

Once ACOFOP realized the Maya nut’s potential, it established an Annual Operational Plan to harvest at an industrial level, but those plans came to a hard stop when the group realized Guatemala lacked any technical and legal guidelines for large-scale Maya Nut operations. ACOFOP worked with Guatemala’s National Council of Protected Areas (CONAP) to establish the necessary regulations to ensure the best management possible, says Madrid.

In 2014, ACOFOP started working with three organizations that had small scale experience harvesting Maya nuts. One of these groups, the Management and Conservation Organization (OMYC), was selling nuts to an international supplier, Cafinter, who sold bushels of them in the United States under an organic, gluten-free label. Most of the profits – 66.6 percent – went to the harvesters, while OMYC kept the remaining amount for administrative and operative expenses.

“When the other organizations watched OMYC’s achievements with Maya nut harvesting, they started learning more about primary processing and commercializing,” says Madrid. “It was a boom! A beautiful experience!”

The environmental impact of Maya nut harvesting is bigger than what one sees on the surface, Madrid adds. “When communities protect the ramón, they are protecting resources, the fauna that feeds on it such as the tapir, wild pig and deer, which are the main food sources for the jaguar.”

However, in these early days, the communities involved needed to bring in more communities if Maya nut harvesting in the reserve was going to scale. In 2013, for instance, OMYC was working with another community group called Alimentos Nutri-Naturales S.A., a group formed entirely by women, and they failed to produce enough nuts to sell to Cafinter.

CONAP, the government agency, didn’t only coordinate with ACOFOP over forest exploitation but also signed contracts with other community groups that stipulates timber/non-timber activities in two industrial-sized concessions within the Maya Biosphere Reserve.

The larger of the two concessions is 83,500 hectares and lies within the Uaxactun territory, an area that OMYC manages. Five percent of it is for timber exploitation while the rest is used for tourism and harvesting non-timber resources such as the Maya nut. Other resources the locals utilize includes ornamental palm called xate, chicle and pepper.

The sustainable ventures are having a social impact. ACOFOP’s Maya nut harvesting operations, for instance, are a community affair. Women lead the harvesting projects, which is a slow painstaking process, and children help in their spare time. Money earned from the business flows mostly to purchasing medicine, groceries and school supplies.

Last year, ACOFOP entered its sustainable Maya nut initiative in Canopy Bridge’s contest, and though it didn’t win, the group’s intent was to spread awareness on the benefits of the Maya nut and promote its consumption, and the contest helped on that front.

As ACOFOP prepares to ramp up Maya nut operations, it needs to engage with more communities to bring more ramón trees into the venture, Madrid says. It also needs finance, which are flowing in from GIZ, Rainforest Alliance and the US Fishing Agency to help purchase equipment and build facilities.

“We want to have the necessary infrastructure to dry seeds and have them in stock,” Madrid explains. “We want to be able to search for international markets and survive seasons that deliver poor yields.”

And of course, awareness raising on the Maya nut’s greatness will continue. ACOFOP and CONAP are engaging with local elementary schools to integrate the nut into school lunch programs.

Ultimately, as a healthy and sustainable food ingredient that empowers local communities, the Maya nut fits the bill for a big comeback, Madrid says.

He sums up the evidence.

“By earning income from managed ramón forests, local communities can improve their livelihoods and deliver fundamental ecosystem benefits like protecting our water sources, providing refuge for local flora and fauna, and bolstering ecosystems that are more resilient to climate change.”