One year ago, 53 companies signed the New York Declaration on Forests, which aims to eliminate deforestation from the harvesting of soy, beef, palm oil, and paper by 2020, and end all deforestation by 2030. New analysis of NYDF signatories shows some supply chains are improving faster than others – and offers intriguing insights into why. 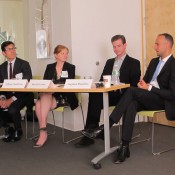 25 September 2015 | Palm oil is the world’s most popular vegetable oil. It’s found in peanut butter, soap, pizza, lipstick and almost everything in between. Much of it comes from land that was carbon-dense peat forest just a few short years ago, and that makes palm oil a surprisingly potent driver of climate change. That puts palm oil producers on the environmental hot seat, and new research shows they’re responding.

The findings were summarized in a report entitled Firm Commitments: Tracking Company Endorsers of the New York Declaration on Forests, which was published by Ecosystem Marketplace’s Supply Change initiative at Climate Week NYC on Wednesday.

The report assessed the progress of companies that had endorsed the New York Declaration on Forests (NYDF), and found that almost all of the signatories with palm oil in their supply chains – 94% – have publicly  committed to reduce deforestation risk tied to the commodity, while only 41% of those with soy and 50% of those with cattle did so. Production of those three commodities, plus timber, pulp, and paper, are responsible for 70% of all tropical deforestation. Buy why is progress on palm oil moving so quickly, and the others lag?

At a post-launch event on Thursday, authors credited an existing and established standard or certification scheme as a primary reason for the many commitments to palm oil. The Roundtable on Sustainable Palm Oil, for instance, certifies 20% of global palm production while the less-established Roundtable on Sustainable Soy certifies not even 1%. Soy certification tends to be regional, the report explains, which is one reason why it lacks widespread uptake.

The timber sector also has well-known certification programs, such as the Programme for the Endorsement of Forest Certification and the Forest Stewardship Council. Together, they certify 20% of managed forests, the report says, and the sector holds more commodity commitments than soy or cattle. There isn’t any global certification for cattle, according to the report and the Global Roundtable for Sustainable Beef is barely two years old.

“It’s clear that the availability of an established standard is significant for companies to act on a commodity commitment,” said Ben McCarthy, a Supply Change Program Associate at Ecosystem Marketplace and a report author.

Jeff Hayward, the Director of the Rainforest Alliance’s Climate Program, agreed that a tangible and established standard can help foster commitment, but he wondered why there wasn’t more and faster uptake with the other commodities the way there was with palm oil. He noted that the Sustainable Agriculture Network has a standard for cattle, there just isn’t a lot of activity around it. Though Hayward did acknowledge that, while each commodity value chain is complex, the cattle chain is particularly complicated.

Event participants agreed that palm oil’s adverse impact on tropical forests is more well-known, receiving more attention in the news leading to further consumer scrutiny. Also, investors are showing a special interest in palm oil, which could be another motivator to commit to change.

“The variety in commitments across commodities is a key finding,” said Jillian Gladstone, the Manager of Disclosure Services at CDP, a Supply Change partner.

She said companies may not realize or are underestimating their liability linked to soy and cattle. As there is a chance Brazil’s soy moratorium will expire next year, Gladstone singled out regulatory risk for companies active in soy.

“There is a perfect storm of conditions that are creeping up on companies. They need to set targets and commitments around sustainable sourcing,” she said.

A Portrait of the NYDF Endorsers

Companies committing to sustainable palm oil and the other commodities are primarily consumer-facing retailers and manufacturers like MacDonald’s, Unilever, Walmart and Cargill. They’re companies headquartered in North American and Europe, far away from the tropical deforestation they’ve now sworn to halt.

The report also found that NYDF endorsers are 60% more likely to commit to zero deforestation or zero net deforestation, legality and human rights. And 68% of companies reported their progress came through procuring certified commodities and certificates. This is a good place to start, authors note, though achieving zero deforestation requires much more action.

“That’s a real weakness of this movement,” he said. “Without a verification system, the credibility of these commitments will be strained. There isn’t any other verification other than what companies are saying they’re doing.”

The fact that there is this level of reporting at this point is a good sign that there is a real commitment to transparency, Hayward said. But corporate actions need to be paired with on-the-ground monitoring and independent verification.

Are Companies Keeping Their Climate Pledges? Find Out Wednesday In New York.

One thought on “Study Sees Environmental Progress In Palm Oil, Lag In Soy And Cattle”