Brazilian authorities are investigating an apparent assassination attempt against indigenous leader Narayni Surui and his wife, award-winning teacher Elisângela Dell-Armelina Surui. The couple were fired on while entering the indigenous territory after members of the Paiter-Surui ejected illegal loggers from the territory. 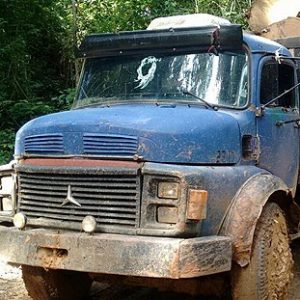 5 December 2017 | Just days after indigenous leader Narayni Surui and other members of the Paiter-Surui indigenous people ejected four logging trucks from their territory, one of the loggers retaliated by attempting to assassinate Narayni and his wife, award-winning teacher Elisângela Dell-Armelina Surui, according to the daily newspaper Folha de São Paulo.

The attack took place around 7:30 pm on November 29, as the two rode their motorcycle along the rutty dirt road that leads into the Sete de Setembro Indigenous Territory. Narayni identified a logger named Rael as the gunman, and said neither he nor his wife were hit. Police are investigating.

Tensions have been rising across the 248,000 hectare territory, which is experiencing a resurgence of illegal logging, along with incursions by diamond miners, after the Surui Forest Carbon Project collapsed earlier in the year.

That project, championed by then-chief Almir Surui with the support of Ecosystem Marketplace publisher Forest Trends, used carbon finance to support a moratorium on illegal logging by generating carbon offsets for the carbon captured in trees. When the moratorium was implemented, loggers put a bounty on Almir’s head, resulting in at least two credible threats to his life. After that, he was placed under 24-hour protection by federal police for most of 2012 and 2013.

The project began to fray when a faction of the Surui, backed by an indigenous rights organization called the Indigenous Missionary Council (CIMI), violated the moratorium and began to collude with loggers. (CIMI has been a longtime champion of indigenous rights, but it has also sparred with indigenous leaders who favor engagement with the market economy, and it actively opposes carbon offsets.) The project finally collapsed after diamonds were discovered in the territory last year.

The apparent assassination attempt took place just days after Narayni and other members of the Paiter-Surui released photographs and video of trucks illegally removing chestnut logs from the territory, the paper says. Narayni told the paper that Rael operated one of four trucks ejected from the territory. Images posted on the newspaper’s web site show a loaded truck with a shattered windshield as well as video of trucks and tractors grinding through part of the territory that straddles the boundary between the states of Rondônia and Mato Grosso.

One month earlier, Elisângela was named Educator of the Year for her work in the territory.