Royal Dutch Shell last week recommitted to achieving zero net greenhouse-gas emissions across its own supply chains and even in the use of its products. 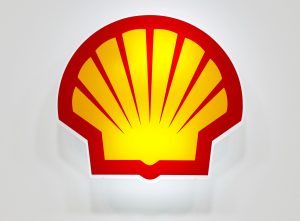 Oil and gas producers have announced deep spending cuts as oil prices have touched 18-year lows and drastic restrictions on movement to slow the spread of the new coronavirus have destroyed demand.

Chief Executive Ben van Beurden told investors the crisis would not distract it from the company’s shift to low-carbon energy as it braces for “a complete overhaul” over the next 30 years.

The raised ambitions put the Anglo-Dutch company – at least on paper – ahead of the most progressive of its rivals, including BP and Italy’s Eni.

“We aim to be a net-zero emissions energy business by 2050 or sooner,” van Beurden said.

The Anglo-Dutch company previously had long-term intensity based targets, rather than goals based on absolute emissions reductions.

It said on Thursday it planned to fully offset carbon emissions from its own oil and gas production and the energy it uses by 2050, in what are known as Scope 1 and Scope 2 emissions.

Those emissions do not include the much larger category of greenhouse gases emitted from fuels and products it sells to customers, such as jet fuel and gasoline, known as Scope 3.

The company however said it will “pivot towards serving businesses and sectors that by 2050 are also net-zero emissions,” which it said means its absolute emissions, including Scope 3, should be fully offset.

BP aims to bring net emissions from the barrels from its own operations throughout their life cycle to zero by 2050, including a 50% reduction of the carbon intensity of all the products it sells, which include products from oil made by other companies.

Shell also expanded its aim to cut the carbon emission footprint from the energy products its sells, an intensity-based measure, by around 65% by 2050, and by around 30% by 2035.

To get to overall net-zero emissions, including Scope 3, van Beurden told a conference call that “our customers can and will themselves take action on the emissions created by their use of our energy products.”

“As we get closer to 2050, we will work ever more intensely with customers who still have emissions that they have not fully mitigated…to find ways to help them do so. That might be through actions they take themselves or we may agree to mitigate those emissions on (their) behalf,” he added.

Mitigation would rely on offsetting emissions, for example by planting trees, or carbon capture technology, which is not currently used at commercial scale. 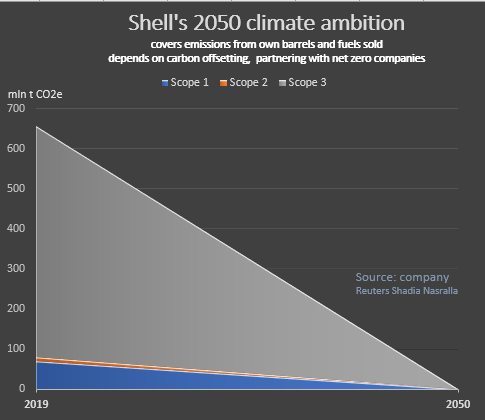 Last year Shell spent roughly 8% of its $24 billion budget on low-carbon energy. Barclays analysts said it was likely that spending on oil and gas exploration would fall.

Shell also set binding targets to reduce its net carbon footprint in the three years to 2022 by 3% to 4% from a 2016 baseline.

In Line With Paris?

Investors welcomed the announcement, but differed on whether it was in line with the 2015 Paris climate agreement to limit global warming to well below 2 degrees Celsius by the end of the century.

“This package of enhanced steps, set against the current other commitments in the oil and gas sector, significantly jumps Shell to the leading global position,” Carola van Lamoen, head of Robeco’s Active Ownership team, told Reuters.

Mark van Baal, founder of activist group Follow This, said the new goals were not enough.

“Shell’s Board is still failing in its responsibility to show leadership at a time of devastating climate change,” he said.

Shell also recommended investors vote against a climate resolution filed by Follow This ahead of its annual general meeting in May calling for more aggressive climate steps.

“A credible Net Zero plan from Shell would start with a commitment to stop drilling for new oil and gas,” said Richard George, head of Greenpeace UK’s climate campaign.

This story is published as part of Covering Climate Now, a global journalism collaboration strengthening coverage of the climate story.