Ecosystem Marketplace launched its latest report researching the co-benefits of forest carbon projects, finding biodiversity conservation, job creation, gender empowerment and clean water among the many non-carbon pros. Report authors will present the findings during a webinar on Wednesday. 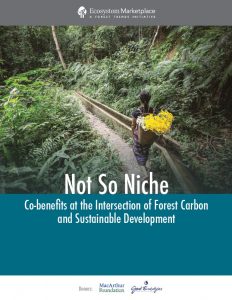 22 March 2016| 8,000 jobs. 141 protected species. 2.2 million hectares of land ownership secured. These are a few of the impacts that forest carbon initiatives collectively had in 2014, as tracked in our new report, Not So Niche: Co-benefits at the Intersection of Forest Carbon and Sustainable Development.

The report is based on responses to Forest Trends’ Ecosystem Marketplace’s 2015 survey of forest carbon project developers from around the world, 81 of whom provided details on the multiple benefits of their groundwork. These impacts go beyond the 34.4 million tonnes of forest-based emissions reductions transacted on the carbon markets last year. Project developers often say they could not deliver climate results without also addressing issues such as local economic development, poverty alleviation, and land tenure reform.

“The historic 2015 Paris Agreement on climate change recognizes the central role of forest protection in keeping global temperature rise in check,” said Michael Jenkins, Founding President and CEO of Forest Trends. “But saving forests without also protecting the 1.6 billion people whose livelihoods depend on them would be like saving museums but throwing out the art.”

However, some of the benefits of forest carbon initiatives are not so easily quantified as jobs or endangered species. For example, 37 projects reported empowering women; 41 benefited vulnerable or marginalized groups; and 54 contributed to cleaner or more plentiful water – but the metrics used to verify these claims varied. While the carbon markets are in many ways at the forefront of figuring out how to apply results-based finance to non-carbon benefits, they are still at the beginning stages of this effort. The report finds that third-party standards provide frameworks for measuring beyond-carbon results, but often leave the specifics up to project developers.

The demand is there. Over half of project developers said their offset buyers engaged in forest carbon markets because of the multiple impacts of their dollars: at least 10.7 million offsets transacted in 2014 found a buyer primarily because of their beyond-carbon impacts. However, the report also indicates that companies and governments are not necessarily paying more per tonne for offsets with verified co-benefits. Clearer demand signals, both in terms of higher offset prices and more specific buyer “asks” for metrics, could lead to more robust measuring and verifying – and more on-the-ground results. The report identifies opportunities to align metrics for multiple benefits with the indicators for the Sustainable Development Goals, which will set global development priorities for the next 15 years.

To learn more about our findings, download the report HERE, or join a webinar presentation tomorrow, Wednesday, March 23rd at 11 a.m. EST. The webinar will provide an overview of the report’s major findings, and we’ll also hear from project developers Taking Root, Wildlife Works, and World Vision about their experiences with delivering and verifying their projects’ multiple impacts. Other project developers are highly encouraged to join the webinar and chime in during the discussion. Register HERE.