The scaling up of the Yaeda Valley REDD project in northern Tanzania nature-based solution demonstrates that the voluntary carbon market is an effective way to deliver climate finance to the frontline and indigenous communities who are conserving biodiversity, strengthening their land rights, and protecting traditional lifestyles, while improving their livelihoods. 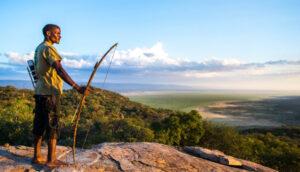 21 April 2022 | Following 12 months of work to expand the award-winning Yaeda Valley REDD project in northern Tanzania, the new project and its activities were validated in March by Plan Vivo, and it is now known as the Yaeda–Eyasi Landscape Project.

The project was initiated in 2011 by Carbon Tanzania in partnership with three Hadza hunter-gatherer communities. Over the years it has grown incrementally to protect 32,000 ha of Hadza ancestral forests and in 2019 won the UN Equator Prize. Witnessing the success of this pilot project, nine surrounding Datooga pastoralist communities joined forces with the Hadza and Carbon Tanzania to develop the Yaeda–Eyasi Landscape project resulting in the protection of 110,500 ha of dryland forest legally owned by the Hadza and Datooga people.

“We are delighted to have been able to work with local communities to build a climate solution that secures their land-rights and provides access to carbon finance. Our project development model has shown that when indigenous people have reliable, secure rights over their natural resources and receive appropriate compensation for their efforts to protect and manage them, powerful climate action results are possible.” – Jo Anderson, Co-Founder and Director of Carbon Tanzania, said:

The Hadza and Datooga communities value their land and natural resources in different ways but work together to defend their forests and prevent 171,100 trees from being cut down every year resulting in 177,284 tonnes of avoided emissions annually. These emissions are quantified and certified as carbon credits and sold on the voluntary carbon market. Carbon Tanzania has partnered with myclimate to part-fund the project expansion through pre-payments, and it will be the primary buyer for the credits going forward.

The Hadza and Datooga communities are now able to directly access international climate finance through the voluntary carbon market with the assistance of Carbon Tanzania. Now, instead of bearing the cost of conservation, the Hadza and Datooga are benefiting from a commitment to manage and conserve it and are empowered to determine their own developmental needs.

The Yaeda–Eyasi Landscape project now extends around Lake Eyasi and connects the world-famous Ngorongoro Conservation Area, a UNESCO World Heritage site, to the Yaeda Valley. This habitat connectivity allows for the movement of wildlife, which results in enhanced outcomes for the conservation of the wider landscape and contributes to global efforts to protect biodiversity.

The scaling up of this nature-based solution demonstrates that the voluntary carbon market is an effective way to deliver climate finance to the frontline and indigenous communities who are conserving biodiversity, strengthening their land rights, and protecting traditional lifestyles, while improving their livelihoods.