More than 220,000 Americans work in the $25 billion Restoration Economy, but few outside the sector understand how it works. Here’s how one Texas rancher tapped environmental finance to pay off debt from the expansion of his ranch and revive a degraded river that runs through it. 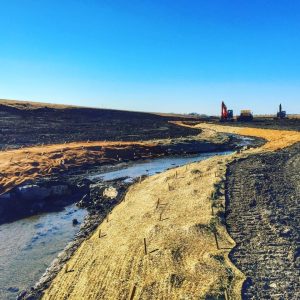 27 March 2017 | Rick Wilson loves the thousand acres of land he bought to expand his ranch in Denton County, Texas, but it didn’t come cheap, and he was nervous about making ends meet – until he got a letter from a man named Adam Riggsbee, offering to pay Wilson good money to let Riggsbee fix erosion problems as well as plant native grasses and trees along the streams that occasionally trickled through the property.

“Some people will hear what we have to say and think, ‘Sounds crazy, never heard of it, too good to be true,’” says Riggsbee. “I get a lot of that.”

But Wilson was intrigued.

“On a whim, I called them to see what it was all about,” he says, explaining that the offer did come with two strings: First, he’d have to put a conservation easement on that curved portion of his land that Riggsbee wanted to restore, meaning he could neither use it for livestock grazing nor develop it for other purposes. Second, the restored stream would partition his land into four separate pastures.

As for the money, it would come from real estate developers who get permission from the Army Corps of Engineers to “impact” other nearby streams. The Corps, however, would only grant that permission if the developers restored an area equal to or better than what they disrupt.

Riggsbee, it turned out, is a “mitigation banker” – a uniquely American type of entrepreneur who makes money by restoring ecosystems rather than destroying them. It’s a job that exists because the Clean Water Act allows for something called “compensatory mitigation”, which balances environmental protection with economic development by leaving provisions for polluters or developers to do some damage if they do more good.

Riggsbee runs a company called RiverBank Conservation, which looks for degraded streams and wetlands near areas of development and then restores them in the hope of generating environmental credits that they can sell to developers who need them – a key component of the $25-billion “restoration economy” that funnels money from development areas – in this case, Dallas-Fort Worth – to farmers, ranchers, and rural communities interested in earning money by restoring or maintaining the rural landscape.

Wilson, of course, had questions about implementing such a project on his property: How much money are we talking? Will you replace my water source? Will you give me fencing? They hammered out a detailed contract and created the Mill Branch Stream Mitigation Bank, which is essentially a nature preserve running through the middle of a cattle operation. The contract even covers the treatment of predator species like coyotes which are drawn to the restored river.

Now, a year after RiverBank and its construction crews completely rebuilt the overgrazed channels, planted trees, and built fencing to keep Wilson’s cows away from the restored area, it’s beginning to look like a healthy waterway again with grassy banks and vegetation.

“The stream construction guys said, ‘This is the Mona Lisa you’re painting out here,’” Riggsbee remembers. “They were joking, but they said, ‘You’re never going to paint another one as beautiful as this.’”

Wilson used the revenue he received to pay off debt and make other investments, and the restructuring of his pasture made for more efficient use of the grass.

The ecological restoration sector exists because of US environmental laws like the Clean Water Act and Endangered Species Act that limit environmental destruction, and the flexibility embedded in these laws allows companies, municipalities and other actors to comply using market-based approaches such as purchasing credits from someone like Riggsbee.

An Ecosystem Marketplace study revealed at least $2.8 billion per years flows through these ecosystem markets in the United States, while a 2015 report found the restoration industry directly employs 126,000 people and supports 95,000 other jobs. That’s more than coal mining, logging or steel production – though fewer than oil and gas or auto manufacturing.

Indeed, RiverBank has three permanent employees besides Riggsbee: one to handle the legal side of contracts with consultants and clients, a project and operations manager and a person to manage sales and finance. They then contract workers on a per-project basis, and even contracted Wilson to build some of the fencing.

“A lot of environmental market products are done on agricultural lands, and it creates another viable economic opportunity for landowners if they choose to participate,” says George Kelly, another restoration industry player, working at Maryland-based Resource Environmental Solutions.

A microbiologist by training, Riggsbee grew up in North Carolina and always had a thing for rivers – so, in 2002, he quit the lab and joined the University of North Carolina at Chapel Hill as a researcher to study dam removal, eventually receiving his PhD.

But Riggsbee always wanted to build things rather than just study them, so in 2006 he joined a Raleigh-based mitigation company called Restoration Systems, which paved the way for him to open his own shop after the Environmental Protection Agency and the Corps released their 2008 rule on compensatory mitigation.

That rule established clear preferences for stream restoration and “in kind” mitigation (streams-for-streams and wetlands-for-wetlands) of the kind Riggsbee is now carrying out on Wilson’s land – as opposed to less rigorous methods that were proving problematic, such as letting developers implement their own restoration or make payments to environmental groups or pay for cheaper but unrelated restoration in, say, wetlands.

Where to Set up Shop?

In mitigation banking, location is everything: you need to be in an area where lots of new development is taking place and lots of degraded land is available for restoration, while regional authorities have to be savvy enough to understand the business.

So when the time came for Riggsbee to branch out on his own, he and his business partner, Matt Jessee, looked to Texas: the economy was booming, while regional authorities seemed poised to make a shift toward the type of in-kind stream mitigation that he knew he could deliver.

In 2009 Riggsbee packed up his young family and set up shop in Austin.

Any business involves risk, and Riggsbee was taking a big one: The EPA creates federal rules, but it’s up to understaffed regional authorities like the Fort Worth District of the Army Corps of Engineers to implement them.

Riggsbee was up against established competitors who’d been restoring wetlands and selling those credits to developers who were impacting streams, and the local Corps had been accepting those when granting development permits. New stream restoration in Texas is several times more expensive than wetland restoration, so Riggsbee couldn’t compete on price. He’d largely built his entire business on the premise that the 2008 rule and local policy would drive demand for his stream credits.

“I told the partners, ‘We’re going to put a bunch of money into this, and we’re going to have credits that we can’t sell,’” Riggsbee explains. “But I also said the Fort Worth District would get tired of seeing credit buyers using wetlands to offset streams when they have stream credits on the market, and they’d get more and more uncomfortable with that.”

The Fort Worth District of the Corps, realizing their mitigation program was out of compliance with the 2008 Rule, was faced with a dilemma: if they changed their policy so developers were required to purchase stream-restoration-based mitigation to ensure compliance, it would result in wetland bankers losing revenues. To craft a solution, the Corps launched a consultation period that resulted in a 2013 compromise that would stimulate demand for stream credits while keeping the older, non-stream banks in business. Under the guidance, half the credits for a permit to build on riverbanks must come from a stream-based bank, while the other half can come from any aquatic based restoration.

RiverBank sold its first offsets in July of 2014, two years and one month after its credits first became available.

“That one policy, the Stream Mitigation Method, has dictated our success and allowed us to grow,” Riggsbee says. “It has also encouraged other mitigation bankers to develop stream restoration projects in the area. It’s a great example of how good policy drives good outcomes.”

The question for many, however, is whether that good policy will continue under US President Donald Trump, or whether he’ll kill the goose that lays the green eggs. Riggsbee, at least, expects some change but is optimistic this industry will indeed survive – though it would help if more people understand how these markets work.

“Using mitigation banks shortens permit review times for developers. So what we do can be leveraged to expedite the implementation of a national infrastructure bill. However, you need to have the right standards and policies in place to make it efficient. We’re helping regulators develop the right policies, so that we’re generating high-quality conservation projects at scales that are useful for the development community,” he says. “It’s pretty cool to me that we can help make economic development more sustainable. In other words, along with the Corps and developers, we’re providing something back to the environment.”