By their very nature, fish are slippery and elusive – as are their habitats. That’s why payments for ecosystems services programs are so rare in fisheries management. But in Bangladesh, where fish and fishing are embedded in the national identity, the government has crafted a program that compensates fishers for conservation. 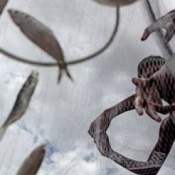 13 August 2015 | Rice and fish make a Bengali. It’s a common saying in Bangladesh, a densely populated low-lying stretch of land in the center of the Bay of Bengal, the world’s largest bay. Fishing contributes nearly 4% to the national GDP, and the hilsa fish, whose habitat stretches from inland rivers out to the sea, are of particular importance. This shad species of the herring family is the national fish of Bangladesh, and millions of people hailing from different tiers of society rely on it as a source of food and livelihood. It contributes almost 12% to the country’s total fish production and generates $650 million in export earnings annually.

But the hilsa’s immense popularity is wreaking havoc on its stock. As a result, the once abundant and affordable fish is rapidly depleting. Hilsa catches have declined steadily over the past 30 years, with sharp declines in the early 2000s, according to the International Institute for Environment and Development (IIED), a research organization focused on sustainable development.

The first large-scale effort to do something about this problem came in 2003, when the government established five sanctuaries in the country’s coastal rivers – essentially banning fishing during sensitive stages, such as the peak spawning season in October.

Under the rule, all fishing is banned during March and April and catching juvenile hilsa between November and April – which was later extended to June – is illegal. The bans are enforced by law enforcement agencies such as the Coast Guard.

But the Department of Fisheries also recognized that the measures required to save the fish could devastate fishers – many of who are marginalized groups living hand-to-mouth. So the government , with support from the World Bank, established a plan, called the Hilsa Fisheries Management Action Plan, for compensation that was (and still is) ahead of its time: in exchange for not fishing, they gave fishers in-kind payments of rice as well as start-up funds or equipment to develop alternative income-generating activities. The idea was to help fishers survive – alongside the fish – until it was time to lift the ban.

Under the program, affected fishers, which in 2014, amounted to 226,852 households, are entitled to 40 kilograms of rice per month during ban periods. Several enterprising initiatives are folded into the income-generating activities and include training in livestock rearing and small business. Since 2009, some 21,000 fishers have engaged in this portion of the program, says IIED.

Getting the Incentives Right

Though the Bangladeshi government hasn’t done a rigorous analysis on the success of its hilsa-saving program, preliminary data showed that it may be working. In a report on fisheries management, IIED notes hilsa catch levels in Bangladesh did increase after the intervention. And while the rise could be attributed to other elements like an increase in input and effort, it sends a promising signal for the government’s conservation scheme, IIED says.

The program was good but far from perfect, said Essam Yassin Mohammed, a Senior Researcher at IIED. Further data on the program’s impacts on hilsa stock was needed as is more conclusive research on its impact on the most marginalized groups of hilsa fishers. Also, the untended consequences of the initiative were unknown with no efforts to investigate, and initial enforcements of the fishing bans were weak.

IIED became immensely interested in the government project and, three years ago, launched a project with local partners including the Bangldesh Centre for Advanced Studies (BCAS) and Bangladesh Agricultural University (BAU) aimed at improving the program through extensive research that plugged knowledge gaps. The ultimate goal is a redesigned program that is inclusive and uses best practices to reward those protecting hilsa habitats, the organization says.

“We welcome learnings from IIED’s research project,” Dr. Syed Arif Azad, the Director General of the Department of Fisheries said in a statement. “We look forward to using them to make the scheme even more effective in the future.”

“I didn’t get involved to scrutinize the government’s initiative. My approach was what you’re doing is great but if we work together, we can make it even better,” said Mohammed, who became the project lead.

The project, which is funded by the Darwin Initiative, a UK-government grants program, improves upon the government’s version in a few ways. One of the key missing pieces was data. IIED traveled to fishing villages several times to talk with fishers to find out how they wanted to be compensated for their compliance with the fishing bans.

“It’s of critical importance to get the preference of the people if you want them to comply,” Mohammed said.

During a visit last year, he met Idris Ali on a busy fish landing site in Chandpur, Bangladesh. Ali, a prominent fisher in the region, gave Mohammed an on-the-ground rundown of challenges facing the hilsa and its fishers.

One challenge being many fishers are in debt to local loan sharks and forced to hand over almost their entire catch regularly – even during bans. To manage this threat, IIED’s project is exploring a microfinance component where fishers can access credit via rural savings banks. The plan is to incorporate a “no take” compliance mechanism into the loan agreement.

Ali also pointed out that hilsa need deep, clear water to survive. Changes in water temperature from climate change, for instance, or pollution can cause hilsa to migrate elsewhere. This echoes one of Mohammed’s main intentions with IIED’s project: a program built in sound science that maintains a deep understanding of the fish species and its habitat.

Another key point of the IIED project was securing financial sustainability. Currently, the government is footing the bill which means the project is subject to vacillating politics and diverting funds. According to an IIED project document, the program consumes roughly 5.5% of the Department of Fisheries’ development budget. And the program is only expected to grow. Project developers, which include IIED and partners, are looking to create a Hilsa Conservation Trust Fund, a self-governing pot of money that could possibly collect seed money from the government, bilateral intstitutions or attract impact investors. Mohammed and other project partners presented a proposal on the fund to Bangladeshi government officials in June, and they hope to implement it as early as next year.

“We hope to see the fund up and running,” Azad said in a statement.

Why don’t PES and Fish Mix?

“You don’t have to be an economist or scientist to realize that once you impose restriction, there is short-term economic loss and you have to offset that short-term loss by giving some compensation,” said Mohammed.

Yet, payments for ecosystem services (PES) in fisheries management is largely uncharted territory and a government-initiated program of this kind is especially rare. And while there isn’t a defining reason explaining PES’ infrequent use in fisheries, there are several theories and smaller reasons that contribute to its lack of use, Mohammed said. In a blog post on the subject, Annabelle Bladon, a PhD student and researcher of PES in developing world fisheries, lists several challenges. Unlike trees, fish are migratory and mobile making monitoring and enforcement more difficult. Clear and secure property rights and international cooperation are therefore often required, Bladon said.

Liaquat Ali, a Senior Fellow at the Bangladesh Center for Advanced Studies, a partner in IIED’s project, noted greater general awareness about PES is needed in order for the mechanism to be used more widely in fisheries management.

Mohammed also argues because most fishing in developing countries is done on a small scale, the true value of fishing on a national level can remain hidden.

Though uncovering the hidden value of fish isn’t an issue in Bangladesh. “When you talk about fish in Bangladesh, everybody listens,” Mohammed said.

He cites the political will in Bangladesh as a huge reason for the program’s success. Mostafa Hossain is familiar with IIED’s project as he is a part of BAU’s Department of Fish, Biology & Genetics. He agrees with Mohammed noting support from local and regional governments. Policing the bans has gradually improved, as well, with more participation from law enforcement agencies.

There is also a growing general acceptance as fishers become more aware and concerned about the state of hilsa stocks, Hossain said.

They all see potential for this model in other fisheries of the developing world.

Building Hilsa Conservation in Bangladesh and Beyond

Hilsa are not just important to Bangladesh, however. Its neighbors, India and Myanmar, depend on healthy hilsa stocks for livelihoods as well and are benefitting from Bangladesh’s efforts, Mohammed said.

IIED is in the process of developing a regional cooperation between the three nations. The organization has plans for a seminar later this year that will include representatives from all three countries and share lessons learned. Mohammed said they hope to have a regional platform for hilsa conservation established after the seminar.

Within Bangladesh, the PES scheme is impacting more than just fishers and fisheries and the project developers are taking a closer look. Fishers unable to fish flood the labor market during bans and don’t purchase rice after receiving their compensation for compliance. Additionally, an increase in lending can cause interest rates to soar.

A briefing paper, which draws data from the Bangladesh project, discusses this issue highlighting best practices to avoid these unintended economic impacts. One recommendation is issuing vouchers for rice or sourcing locally. Another is incorporating labor-intensive activities that offer community-wide benefits into the scheme.

Ironing out the many critical elements of PES in fisheries management, such as this, Mohammed said, is what the project is all about.