In China, Peru, the United States and elsewhere, nature-based interventions to manage water supplies is on the rise, and governments, companies and water providers are establishing some innovative ways to finance it. Ecosystem Marketplace’s latest State of Watershed Investment report tracks global payments for green infrastructure for water, and report authors will present key findings during a December 15th launch webinar. 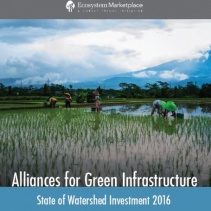 14 December 2016 | Peru made headlines last year with its nationwide embrace of green infrastructure to help manage water stress and scarcity, which involved ancient mountain canals that helped communities even out their water supply. The nation continued to make headlines in 2016 when lawmakers issued a flurry of environmental policies, including a Mechanisms of Compensation for Ecosystem Services law, enabling and incentivizing dollars for conservation.

Also in 2016, Nature and Culture International established a water fund school in neighboring Ecuador, which will teach watershed conservation to nearly 25 municipalities. And The Nature Conservancy set up Africa’s first water fund in Kenya.

There are other examples but these are enough to suggest a global trend, a move governments and municipalities are making that embraces natural infrastructure to manage water supplies.

“It’s a major shift in the way we think about conservation – nature isn’t just ‘nice to have’ but an absolutely critical piece of our water infrastructure systems,” says Genevieve Bennett, Senior Associate at Ecosystem Marketplace.  “There are hundreds of communities all over the world who understood that years ago, and started figuring out how to make sure they were protecting their water sources. And now we’re starting to see that concept making its way into higher-level policy.”

Bennett is the author of Ecosystem Marketplace’s latest report: Alliances for Green Infrastructure: State of Watershed Investment 2016, which tracks payments for nature-based solutions used to secure clean and reliable water.

Authors tracked a lot of transactions in 2015. Governments, water utilities, companies, and communities spent nearly $25 billion on payments for green infrastructure for water. More than 400 programs in 62 countries invested in the natural ability of forests, wetlands, grasslands, and other ecosystems to ensure healthy water supplies for cities and communities, and to combat threats from rapid urban expansion and agricultural pollution.

And that’s just skimming the surface. Alliances for Green Infrastructure, which is less than 60 pages and free to read and download, launches tomorrow with an 11:30 am EST webinar that offers a deeper dive into the findings.

The panelists include report author Bennett and other practitioners in the field sharing lessons learned on financing green infrastructure and watershed restoration.

Steve Crooks, a longtime wetland scientist and Principal at the San Francisco-based consultancy Silvestrum Climate Associates says the activity happening in California and Peru is indeed a sign that both state and national government are embracing natural infrastructure and moving towards applying a more holistic landscape planning.

“Can we say that old traditional ways of engineering landscapes are dead,” Crooks asks. “No, but we do seem to be moving in the right direction.”