The coming year will be a pivotal one for climate finance, and especially for forests, as more than $7 billion is set to cumulatively flow to forest-protection efforts aimed at Reducing Emissions from Deforestation and Degradation (REDD+) before the year is over. Here’s what we know about past flows in Brazil, Colombia, Ecuador, Ghana, Liberia, Tanzania and Vietnam. 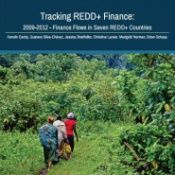 8 January 2015 | The Lima Climate Talks last month yielded the Lima Call for Climate Action, which includes both a negotiating text that will be the basis for the start of negotiations in 2015 and general rules for countries to develop their Intended Nationally-Determined Contributions (INDCs) to the climate effort. With deforestation accounting for more than 15% of all greenhouse gas emissions, many countries will undoubtedly seek to incorporate REDD+ (Reduce Emissions from Deforestation and Degradation and other land use activities (REDD+) into their INDCs, meaning we now have two separate REDD+ tracks to consider.

That’s because INDCs don’t kick in until 2020, but REDD+ is already being deployed today through the private sector and various donor agencies. That means countries will need to figure out exactly how REDD+ is financed in the 2015-2020 period and how it will be integrated into INDCs after 2020. For that to happen, we must all be able to see where REDD+ finance comes from, where it goes, and what it achieves – activities that have, until now, been difficult at best.

In 2011, Forest Trends launched the REDD+ eXpenditures Tracking Initiative (REDDX) to provide greater transparency around REDD+ financial flows. Despite over US$7.3 billion pledged to support REDD+ Readiness by 2015, information has remained limited on how much of this finance has actually flowed to implementing REDD+ on the ground. In partnership with national government and civil society organizations, REDDX currently operates in fourteen countries collectively representing around 1.1 billion hectares of forest, or about 72% of the global tropical forest cover.

For a comprehensive overview of the Lima COP, see “Countries Know They Have to be Bold and Ambitious Next Year: Lima Negotiations Set That in Motion“.

For a detailed understanding of the new bottom-up approach to combatting climate change, see “INDCs, REDD+, And The Alphabet Soup of COP 20“.

We just released our first REDDX report, “Tracking REDD+ Finance“, which focuses on the years 2009-2012, covering the major developments of the Fast Start Finance period, in the initial seven REDDX pilot countries: Brazil, Colombia, Ecuador, Ghana, Liberia, Tanzania and Vietnam. The consolidation of the major trends and findings in each of the seven REDDX pilot countries presents a microcosm of the global picture of REDD+ finance. Key findings include:

This report and other information can be found on the REDDX website at: http://reddx.forest-trends.org/

Gustavo A. Silva-Chávez is Program Manager of Forest Trends’ Forest Trade and Finance Program’s REDD+ Expenditure Tracking Initiative (REDDX). He can be reached at gsilva@forest-trends.org.