Although payments for ecosystem service programs have social aspects that can benefit the poor, all too often local communities are ignored. But Bolivia may offer a solution with a holistic approach-known as the Bolivian mechanism-that can balance environmental protection with poverty reduction. However, the trade-off between social and ecological goals isn’t eliminated entirely with this approach. 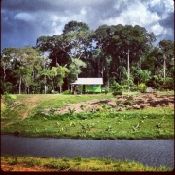 27 January 2015 | You don’t have to go far in Bolivia to find treasure. It’s everywhere: in the vast Amazonian forests; in Lake Titicaca, which lies nearly four kilometres above sea level in the Andes; in the peaks and rain-gathering waterways of the Andes mountains; or in Bolivia’s 2,000 animal species.

And to call all this treasure is hardly romantic — because, to some, Bolivia’s natural environment is worth a lot of money.

Bolivia is not alone on that front. Programmes that pay people to sustainably manage ‘environmental assets’ are increasingly popular, especially in the global South. But questions about the money’s impact on efforts to reduce poverty and inequality have persisted for decades. Does the cash help poor or indigenous people living in valuable ecosystems? Or is it more likely to benefit rich landowners? In Bolivia and elsewhere, research is beginning to show that these two goals — environmental protection and poverty reduction — need not be mutually exclusive.

A recent estimate of the planet’s ‘natural capital’ is US$125 trillion a year. [1] This figure attempts to capture the value of the ‘ecosystem services’ — essentially all the benefits of a healthy, natural environment — provided by such things as carbon-storing trees, drainage basins that prevent flooding and insect life that helps agriculture flourish.

Natural capital is a controversial concept. Many feel putting a price on nature is either impossible or ethically unsound. But its supporters argue that without doing so ecosystem services are at risk of being left out of economic models and decision-making.

“We’re degrading the natural environment and losing species at an alarming rate. So let’s put a value on nature and get it incorporated into these models so that we can start investing in the maintenance, protection or possibly even enhancement of those ecosystem services,” says Darren Evans, a conservation biologist from the University of Hull in the United Kingdom.

Programmes to quantify and pay to maintain the value of ecosystem services have existed in one form or another since the 1950s. Today they are known as payments for ecosystem services (PES) initiatives. These schemes pay farmers and landowners for managing land in a way that conserves some targeted environmental resources, for instance a forest, river or species.

But for as long as they have existed, efforts to price nature have been divisive. What has emerged, however, is evidence that the better a scheme is tailored to benefit all stakeholders, the more likely it is to succeed.

One country involved in this battle — and its possible resolution — is Bolivia. In 2010, the nation hosted the World People’s Conference on Climate Change and the Rights of Mother Earth, a global meeting attended by 30,000 government and civil society delegates. Bolivia consulted the conference on whether to sign up to the UN’s REDD (Reducing Emissions from Deforestation and Degradation) programme.

REDD has some similarities to a PES scheme, but it operates at a global rather than a national scale. It is funded by selling certificates known as ‘carbon credits’, which represent carbon emissions saved through the programme, on international carbon markets. At present, 56 developing nations have signed up to the programme, but Bolivia decided against joining after the ‘People’s Agreement’ drawn up by the World People’s Conference emphatically rejected this move. [2] Later in 2010, President Evo Morales further hardened his nation’s position in an open letter to indigenous peoples entitled: “Nature, forests and indigenous peoples are not for sale.” [3]

Lykke Andersen, director of the Center for Environmental-Economic Modelling and Analysis at think-tank the Institute for Advanced Development Studies (INESAD) in Bolivia, says: “Bolivia is really an ideal candidate for participating in a REDD mechanism. It is promising because it has so much forest and so much deforestation. But at the People’s Conference, the people there rejected REDD strongly. The government accepted that decision and made it a national policy.”

Bolivia’s opposition to REDD illustrates tensions that can cause schemes that put a price on nature to come unstuck, Andersen says. In the case of REDD, the unhappiness was triggered partly because poorer countries would have to reduce emissions while richer countries carried on raising theirs.

With REDD branded a prohibited concept in Bolivia, Andersen says the country’s conservation scientists instead turned for inspiration to smaller, local PES schemes that took poverty alleviation into account.

In 2012, INESAD carried out a countrywide analysis of the likely social and environmental impacts if Bolivia had adopted REDD. [4] The results showed that large-scale adoption of REDD would have decreased deforestation, but would also have increased competition for agricultural land, pushing up food prices and worsening poverty. More than 90 per cent of REDD-related revenues from carbon credit sales would have gone to just five per cent of the population, it forecast.

INESAD also ran the analysis based on an alternative mechanism that Anderson and her team designed. This included financial and technical assistance for sustainable development projects within the forest — and taxes and fines for deforestation. Under this theoretical situation their model showed that the nation’s poor benefitted more and food prices were more stable.

The mechanism Anderson’s team designed has come to be known as the ‘Bolivian mechanism’. [5] In 2013, UN-REDD decided to support it with US$1.1 million and Denmark pledged US$26 million. Four pilot projects testing it are currently underway.
“The Bolivian mechanism is based on looking more holistically at forests, by supporting local communities who protect their forests and engage in economic activities that are forest-friendly, while punishing deforesters with taxes and fines,” Andersen explains.

“What we showed in the analysis is that the benefits of the REDD mechanism almost exclusively went to the side of reducing emissions, with very little benefit for the people of Bolivia, the rural inhabitants who would have to modify their livelihoods,” she says. “With the Bolivian mechanism, there was a much fairer distribution of the benefits, helping the poor while hurting the big deforesters.”

Unlike REDD, which lacks punitive elements, the Bolivian mechanism goes further than simply paying landowners not to cut down trees — which Andersen tartly likens to paying a thief not to steal — by also rewarding activities that protect the country’s forests. “It’s a much more healthy system of incentives where you reward the behaviour that you want to see and punish the behaviour that you don’t want to see,” she says.

Those most likely to be punished under the system are wealthy agricultural producers, while those most likely to receive payments are poorer Bolivians living and working in forest areas. And the mechanism also aims to make payments to poorer communities more straightforward by requiring legal evidence of land ownership only when levying fines and taxes, rather than when managing payments. This is vital for equity and wealth redistribution as many people that live on the land do not have legal proof of ownership, despite it unequivocally being their home.

Paul van Gardingen, director of UK research programme Ecosystems Services for Poverty Alleviation, agrees that PES schemes must be well designed to equitably reward both the poor and wealthy for activities that protect the environment.

“There’s absolutely no question that PES can work,” he adds. “But one of the challenges is how you link that up to poverty alleviation.”

The problem of land ownership

Land tenure has been a persistent stumbling block for PES, with the worst cases reinforcing rather than alleviating inequalities. This is because many older or poorly designed PES schemes require proof of land ownership, something often only the wealthy have, for payment. Land ownership is often unclear, especially in countries with indigenous or remote rural communities.

But Ina Porras, an economist at UK-based policy research organisation the International Institute for Environment and Development, says there may be better ways of framing a PES programme than by using property rights and land ownership.

Even introducing such a system within a developed country would benefit big landowners most due to land ownership being concentrated among the rich, Porras says. “So we need to think carefully about how benefits are applied.”

Costa Rica offers an interesting model in this regard. There, a national PES scheme has been a success since it started in 1997. It has helped raise the country’s forested land cover from a low of 20 per cent in the 1980s to over 50 per cent in 2012. It works by providing contracts to landowners for different types of forest conservation: protection, reforestation, sustainable management and regeneration.

Funding allocations for indigenous associations have also risen steadily, from three to 26 per cent between 1997 and 2012. This was partly due to ongoing redesigns of contract procedures: in 1997, the scheme did not prioritise different social groups on the basis of economic need, resulting in low uptake for indigenous groups with little money; in 2012, however, they were being allocated a set amount of contracts before others could bid.

While the principle of setting aside some contracts for indigenous groups resolves some problems around land tenure, the persistent challenges of fair access to the programme and equitable distribution of benefits still require further analysis, says Porras.

She is studying participation in the Costa Rican programme. In 1997, 44 per cent of funds were paid to cooperatives and associations, but these types of organisations had virtually ceased receiving money by 2012. Meanwhile, payments going to ‘legal entities’ such as businesses or other legally registered groups have risen from just over a quarter to almost half of total payouts. Understanding these shifts is key to designing PES schemes and ensuring they work for both communities and conservation over the long term.

Looking at the studies by INESAD and Porras, it apparent that there is a need to understand the risk of a PES scheme exacerbating social inequality at the expense of environmental protection, and to design it accordingly.