Mangrove forests are excellent at storing carbon particularly in their soil. But these critical forest ecosystems are under threat of conversion, degradation, and destruction. The Climate Action Reserve is working to protect and restore mangrove ecosystems and recently registered the first-ever mangrove forest offset project in Mexico. The Manglares San Crisanto/San Crisanto Mangroves project is demonstrating the ability of mangrove forests to become viable offset projects and deliver important co-benefits to local communities. 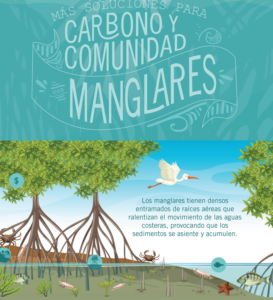 10 August 2022 | Blue carbon and its many benefits are popular topics in discussions about how to address climate change. Many types of blue carbon projects hold tremendous potential for sequestering carbon and protecting their ecosystems, but they are not yet established, which has opened some debate about how impactful blue carbon can be in sequestering greenhouse gases at the scale we need.

There is, however, one type of blue carbon offset project that can be accurately, reliably and transparently measured in terms of emissions reductions. And it is critical for supporting local ecosystems and communities. It’s mangrove forests. This summer the Climate Action Reserve registered the first-ever mangrove forest project in Mexico, marking a significant milestone in demonstrating the impact and feasibility of this type of project.

To understand what this offset project type is and the value it brings, let’s look at the basics.

Mangrove forests are unique and distinct. They are found around tropical and subtropical shorelines and thrive in those salty waters, where other trees cannot survive. Their thick prop roots are twisted and complex, making them appear to stand above the water. Their roots also slow down water flow and allow sediment to collect. Because of these characteristics, mangrove forests are natural protectors and providers. They stabilize coastlines, reduce erosion and provide critical habitat for organisms.

Mangrove forests are critical to addressing climate change because they are excellent at storing carbon. In fact, mangrove forests are among the most carbon-dense ecosystems and can sequester four times more carbon than rainforests. Much of the carbon is stored in the soil collected beneath the mangrove trees.

Additionally, mangrove forests are critical for protecting against the current impacts of climate change by stabilizing coastlines and reducing erosion from storms, currents and tides.

Unfortunately, numerous issues are facing the world’s critical mangrove forests. The American Museum of Natural History (AMNH) describes mangroves as “among the most threatened habitats in the world.” Less than 50 percent of the world’s mangrove forests were intact at the end of the 20th century, and of those that remain, half are in poor condition.

The Climate Action Reserve is working to protect and restore these unique ecosystems. The organization recently registered the first-ever mangrove forest offset project in Mexico. The Manglares San Crisanto/San Crisanto Mangroves project, which was registered under the Reserve’s Mexico Forest Protocol v1.5, is the first of its kind in Mexico. It includes three reporting periods, and an estimated 47,908 tonnes CO2 have been removed by the project.

The Reserve’s Mexico Forest Protocol encourages the protection, improved management and restoration of mangrove forests through the issuance of offset credits for additional emissions sequestration activities above the baseline. Communities following the protocol receive economic incentives and resources to ensure that these coastal ecosystems provide greater benefits for surrounding communities and biodiversity, build greater resilience to the impacts of climate change and store more carbon to benefit the global climate.

As the first project of its kind in Mexico and also the first mangrove project registered with the Reserve, the San Crisanto Mangroves project is pioneering and demonstrates the ability of mangrove forests to become viable offset projects and support local communities.

According to Jose Ines Loria Palma, President of Fundación San Crisanto, the San Crisanto Mangroves project taught the community many lessons, including:

Jennifer is Vice President, Communications and Business Outreach for the Climate Action Reserve. Jennifer oversees all marketing and communications activities, including oversight of the websites, external communications, media relations, collateral materials and internal communications processes, and supports the strategic growth of the organization. She also oversees the Reserve’s annual conference, Navigating the American Carbon World.