Tata Yawanawa was a spiritual leader of Brazil’s Yawanawa indigenous people championing conservation and sustainability while maintaining cultural and spiritual traditions. He passed away in December at the age of 103. Here, Forest Trends’ President Michael Jenkins reflects on his life and legacy. 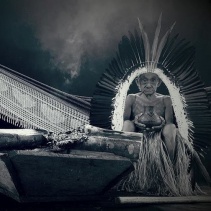 22 February 2017 | Distracted by the chaos and turmoil of recent months, the world quietly lost a treasure when Tata Yawanawa, the oldest living spiritual leader of Brazil’s Yawanawa indigenous community, died at the age of 103 this past December.

He was born in 1913, years before the Yawanawa first came into contact with the Western world whose rubber barons and missionaries would turn the life of the tribe upside down. Tata, who passed away surrounded by family and the forest he called home, was the tribe’s oldest living shaman, or paje, and its de facto historian.

Tata’s death could have been just another casualty of a crisis playing out across the Amazon and across the globe: reservoirs of traditional knowledge are disappearing as communities lose their elders, often without any tangible trace of the valuable wisdom they accrued over lifetimes.

But Tata Yawanawa’s story and his memories of tribal life and culture over the last century remain alive through the colorful pages of a children’s book he created and released barely a month before he died. “Vakehu Shenipahu: Children’s Tales of the Yawanawa People” recounts seven stories that have been passed down for generations through oral storytelling, recited from Tata’s memory and brought to life by the colorful imaginations of the Yawanawa children who illustrated them.

The book is designed to entertain and affirm, but it also speaks more broadly to the close relationship indigenous peoples around the world maintain with nature and its resources. These communities mastered sustainability in all its forms long before it was fashionable and practice environmental values that Western society has adopted only in recent decades – like “save the rainforest;” “eat local;” and “reduce, reuse, recycle.”

Indigenous and traditional communities continue to be the most effective forest stewards: between 2000 and 2012 in Brazil, for example, rates of deforestation in indigenous territories were found to be 85% lower than elsewhere. Research shows that around the world, the best way to curb forest destruction is to strengthen these communities’ land rights. Similarly, sustainable food production dates back millennia in Bolivia’s Beni savannah, where archeological evidence reveals that sustainable fishery management supported large pre-Columbian societies.

This type of relationship with natural systems – a heritage already lost in many places – is one that the Western world would be smart to learn from, since our track record on managing natural resources is sub-par, to put it mildly. In particular, indigenous knowledge of sustainable food production is more valuable than ever at a time when the globe is grappling with the monumental challenge of feeding 10 billion people. That’s why it’s critical that these communities survive and thrive, in order to transmit their knowledge to future generations both within and outside their cultures.

Preserving Knowledge before It’s Too Late

Back in Tata’s village, documenting his deep knowledge of ancestral stories is just one of the ways indigenous communities throughout the Amazon are preserving cultures and histories that are in danger of disappearing with little trace. A medicinal plant garden in one Yawanawa village offers a living laboratory for youth to learn how to use the healing plants that have helped their communities survive for centuries. The initiative may soon expand to all nine villages.

A similar “Living Pharmacy” project is also taking shape in the Paiter Surui community, who live east of the Yawanawa along the Mato Grosso-Rondônia border. There, an indigenous botanist with a near-encyclopedic knowledge of Amazonian plants has already cataloged dozens of medicinal species, preserving knowledge of these plants for future generations within and outside the community.

The Surui reached another milestone in this process when they recently published a book of their own, which faithfully documents their own history in their people’s own words. “A History of the Beginning and the End of the World: The Paiter Surui First Contact” contains 16 accounts from elders in the community – men and women who have survived violence, disease, and despair and who exemplify Surui resilience. Theirs is a tale of determination, humanity, and bravery, but also one that portrays life in the “old times” before contact in 1969 with the yara, or white man: from celebrations and sacred rituals to their community’s traditional cuisine and mastery of medicinal plants.

The book was written by Surui leaders and translated from the Paiter language to Portuguese by the young members of the Surui Paiter community. As with the Yawanawa children’s book, the Surui compilation is a project spearheaded by Forest Trends’ Communities Initiative with financial support from the IKEA Foundation and Fundo Vale. These books are an important step in eternalizing cultures that traditionally shared their knowledge through oral storytelling and were on the brink of extinction in the decades following contact with Western society.

At the same time these communities are attempting to preserve history, leaders like Tata have become agents of change in their communities. Under his leadership, for example, Yawanawa women were permitted to become shamans for the first time; today, four women have achieved or are working towards this status.

Yawanawa and Surui women are also building new economic opportunities by reclaiming their artisan roots, promoting traditions like making jewelry and pottery decorated with patterns that communicate their tribe’s values and history. Linking these artisans to the outside world transmits these cultural traditions while providing economic opportunities that are critical to enable the Yawanawa to remain on their land.

The Yawanawa and Surui are just two of many communities – both indigenous and non-indigenous, from the Amazon to the Horn of Africa to the Australian Outback – who are battling to retain traditional knowledge. Especially in times of turmoil, Tata and leaders like him are the “librarians of the natural world” who keep us grounded in time-tested solutions for sustainability, food security, and conservation.

Governments have recently gone to great lengths to preserve our planet’s biological diversity, even building a global “doomsday vault” of seeds on a remote Norwegian island to protect against catastrophic loss of genetic diversity. What are the steps we must take to ensure cultural knowledge is also preserved for the benefit of future generations? At Forest Trends, we believe that process begins with recognizing and valuing the wisdom of our community elders before it’s too late, and capturing the knowledge all societies can gain from them.

So while we struggle to forge a path forward, piecing together the puzzle of balancing our planet’s finite resources with humanity’s unprecedented needs, we should take comfort in the examples set by our indigenous leaders and let those examples guide us.

Michael Jenkins is CEO and Founding President of Forest Trends.