The large floodplains and broad vegetated buffers of a stream restoration site near Raleigh, North Carolina significantly reduced flooding when Hurricane Matthew tore through the state. As the frequency of extreme weather events is only expected to rise, developing with nature in mind is increasingly critical, says Environmental Defense Fund’s Paxton Ramsdell. 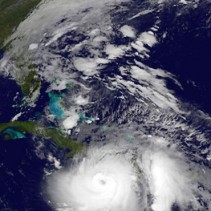 18 November 2016 | In the weeks following the devastation of Hurricane Matthew, I’ve spent a lot of time reflecting on why this particular storm caused so much damage and how my community can be better prepared in the future.

As both a resident of North Carolina and a practitioner of streams, I have a personal and professional perspective on this tragic event – one that I hope can influence future decisions about how the Southeast manages its waterways to keep communities safe while also providing clean water, vital wildlife habitat and other benefits to people and nature.

Hurricane Matthew was a case of extreme weather. But extreme weather events are only expected to become more frequent as a result of climate change. The devastating impacts that this particular storm had on the Southeast region is a clear case for increasing the resiliency of our communities to climate change – both rural and urban communities.

Decades of growth and urban development in the Southeast have changed the natural course of the region’s waterways, which provide critical flood control and storm protection. Without sufficient mitigation to offset these impacts, the health of our rivers and streams has degraded, along with natural services they provide. This leaves us particularly vulnerable.

As we recover from this storm and prepare for the next, we must work to restore the health of our impacted waterways and ensure that any future development is managed in a way that minimizes impacts to rivers and streams.

A blueprint for resilient communities

In late October, I visited a stream restoration site just outside of Raleigh in Wake County, North Carolina. This area has rapidly developed over the course of the last two decades.

The site that I visited, called the Smith Austin site due to its position between Smith Creek and Austin Creek, was converted from a farm into a housing development in the early 2000’s. As you can see from the side by side aerial images of the site from 1999 (left) and today (right), Smith Creek (top wooded area), and Austin Creek (lower wooded area) are now bordered by houses with soccer fields between the two. 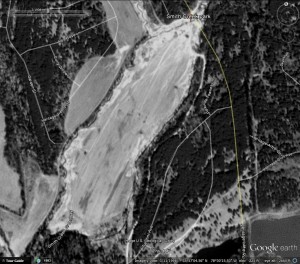 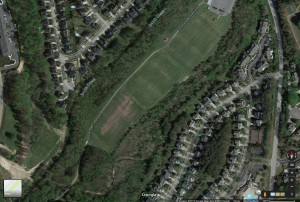 This site is a good example of how function-based stream restoration can help minimize the effect of severe flooding. Despite being located in a developed region, both streams have broad vegetated buffers and large floodplains. Restoration efforts for this site focused on reconnecting the streams with their floodplains, and the design and construction has paid off.

After Hurricane Matthew hit the area, there was minimal evidence of erosion at this site and significant evidence (sticks and other woody debris) that the surge of water exited the channels and flooded the floodplains as designed. This helped to reduce flooding impacts on the housing communities surrounding and downstream of Smith and Austin Creeks.

While this site is not perfect – sedimentation into the streams from development is an ongoing threat to water quality and species habitat – it has performed as intended during flood events, demonstrating the important role that healthy and restored streams play in protecting communities and building climate resiliency.

We must not forget the critical role that our waterways play beyond flood control and storm protection. Rivers and streams also provide our drinking water, irrigation for local farmers, habitat for fish and wildlife, and abundant recreational opportunities for residents and visitors alike.

We must continue to take steps to improve the health of streams in the Southeast and across the country so that people and nature are safe and can thrive.

Paxton Ramsdell is the Southeast Habitat Markets Analyst at the Environmental Defense Fund.

How Agroforestry Can Shield Haiti From The Next Hurricane