California’s Porter Ranch leak has pumped more than 83,000 metric tons of methane into the air to-date, and the number will certainly get higher before Southern California Gas plugs the hole. Accidental discharges like this aren’t covered under California’s cap-and trade program, but the company will be forced to offset its mess. The question is: how? 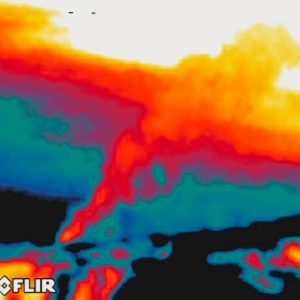 14 January 2015 | Over the weekend, California Governor Jerry Brown ordered the California Air Resources Board (CARB) to make sure Southern California Gas Company “mitigates”* all the methane that its Porter Ranch facility spews into the atmosphere through the end of March. In case you missed it, the facility sprung a leak in late October, and it’s spewed more than 83,000 metric tons of climate-changing methane to-date. It’s anyone’s guess how much higher that will be by the end of March, but the company says it will have the hole plugged well before then.

CARB staff are currently working with the governor’s office and SoCal Gas to work out an arrangement, begging the question: why is this ad-hoc scramble necessary? After all, the oil-and-gas sector has been covered by California’s cap-and-trade system since last year, and you’d think they’d automatically be forced to offset, with or without the governor’s intervention.

And you’d be wrong, because the Porter Ranch plume is comprised of “fugitive emissions”, which CARB defines as “emissions that are unintentional and could not reasonably pass through a stack, chimney, vent, or other functionally-equivalent opening.”

Accidental discharges, in other words, aren’t covered by the cap, and it’s not clear how they’ll be factored into the oil-and-gas sector’s total emissions, either.

CARB isn’t the only regulator to give fugitives a break. Plenty of the world’s 50 or so other emerging cap-and-trade systems do the same.

“Fugitives are too difficult to quantify with accuracy to be subject to a carbon price,” says Rajinder Sahota, who heads the CARB team that evaluates industrial activities. “We can’t set caps for unpredictable and hard-to-quantify fugitive emissions. As such, the cap-and-trade program covers predictable and quantifiable emissions from combustion and process sources.”

Basically, fugitives are always leaking, in little bits here and there, and no one really knows how many there are, so you can’t put a price on them. What’s more, the argument goes, cap-and-trade isn’t about punishing outliers who run amok, but rather about prodding the corporate herd towards long-term emission-reduction strategies. It should, in other words, reward good behavior, and that wouldn’t happen if SoCal Gas’s mistake drove up prices for all.

The Variable Cost of Offsetting

Methane is roughly 84-times worse than carbon dioxide in the short (20-year) term, but it also a “short-lived” greenhouse gas that’s only 28-times worse over a 100-year period, and 100 years is the timeframe that the Intergovernmental Panel on Climate Change (IPCC) uses, which means it’s also the one that California currently uses when translating methane emission to carbon-dioxide equivalent (CO2e), which is the standard measure of greenhouse gases.

The Climate Trust, however, sees regulators shifting to the shorter-term horizon over the coming year, a development that would drastically change the way farms and companies offset methane emissions.

“Offset protocols currently use the outdated 1995 100-year global warming potential for methane: 21,” they wrote. “Updating protocols to use the current 20-year GWP, 84, would immediately quadruple the number of offset credits livestock digesters generate every year.”

That probably won’t impact SoCal Gas, but you can get a feel for what it means by checking out Environmental Defense Fund’s nifty little Porter Ranch counter (below). As you can see, EDF says Porter Ranch has spewed about 7 million tons of carbon dioxide equivalent (CO2e) to date, which translates into 7 million offsets, as opposed to roughly 2 million using the current GWP.

The latest Ecosystem Marketplace survey shows that California offsets are currently trading at about $10 each, SoCalGas would have to pump at least $70 million into projects just for the emissions to-date under the new ratios, but less than $20 million under the current ones.

*CORRECTION: We initially wrote “offsets”, which is a more specific term than “mitigate”. The company may, for example, be able to mitigate directly, by improving other aspects of its operations.