Payments for Ecosystem Services have always seemed like a good idea, and evidence is growing that they work. The latest comes from a Northwestern University study involving forest owners in 120 villages in western Uganda. Half were given cash rewards if they kept their forest intact, and half weren’t. Guess which group took better care of their forest?

This story is reprinted from Northwestern Now

21 July 2017 | A new Northwestern University study suggests that paying people to conserve their trees could be a highly cost-effective way to reduce deforestation and carbon emissions and should be a key part of the global strategy to fight climate change.

The study, led by Seema Jayachandran, associate professor of economics in the Weinberg College of Arts and Sciences at Northwestern, sought to evaluate how effective “Payments for Ecosystems” (PES) is at reducing deforestation. PES is a program in which people are given financial rewards for pro-environment behaviors.

“We found that the program had very large impacts on forest cover,” said Jayachandran, also a faculty fellow with Northwestern’s Institute for Policy Research. “In the villages without the program, 9 percent of the tree cover that was in place at the start of the study was gone by the end of it, two years later. In the villages with the PES program, there was 4 to 5 percent tree loss. In other words, there was still deforestation, but much less of it.

“It wasn’t the case that only forest owners who were planning to conserve anyway enrolled,” Jayachandran said. “The payments changed people’s behavior and prompted them to conserve. And we didn’t find any evidence that they simply shifted their tree-cutting elsewhere. This truly was a net increase in forest cover in the study region.”

The first of its kind, the study applies the method of field experiments, or randomized controlled trials, to the question of how effective PES is. The study design helped the researchers accurately measure the averted deforestation caused by the program.

Jayachandran said the cost effectiveness of the program compared to other approaches to reduce carbon emissions, such as subsidies for hybrid or electric vehicles in the U.S., was eye opening.

“A major contribution of the study was to compare the benefit of reduced deforestation to the cost of the program. What’s that extra forest worth to society? We do that by applying what’s called the ‘social cost of carbon,’” Jayachandran said.

“This is an estimate that others have come up with for the economic damage to the world from each ton of CO2 that is emitted. We found that the benefit of the delayed CO2 emissions was over twice as large as the program costs. For many other environmental policies, the value of the averted CO2 is in fact smaller than the program costs.” 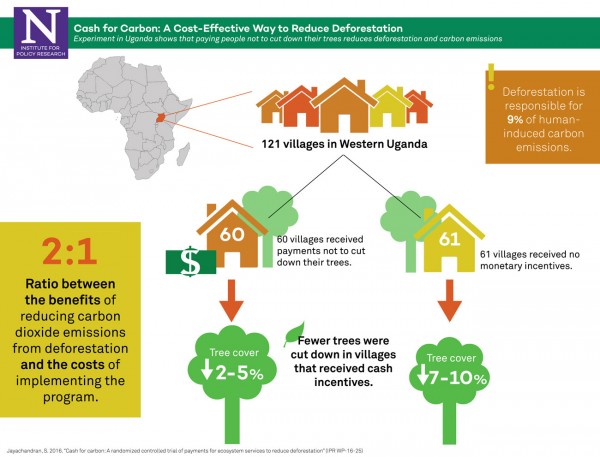 Today, with deforestation accounting for a substantial portion of human-induced carbon emissions, the researchers describe the payment program they studied as “a cost-effective way to avert deforestation in developing countries — and hence a powerful tool to mitigate climate change.”

“Cash for carbon: A randomized trial of payments for ecosystems services to reduce deforestation” will be published in the journal Science on July 21.

New to ecosystem services? Check this out:

One thought on “Payments For Ecosystem Services Work: Study”