Palm oil is found in hundreds of products but it’s virtually unheard of by the average consumer despite its production destroying huge swaths of forest in tropical places like Indonesia and Malaysia. But the Union of Concerned Scientists is trying to help change that by promoting awareness as a key step in achieving deforestation-free palm oil development. 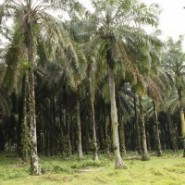 Palm oil is found in hundreds of products but it’s virtually unheard of by the average consumer despite its production destroying huge swaths of forest in tropical places like Indonesia and Malaysia. But the Union of Concerned Scientists is trying to help change that by promoting awareness as a key step in achieving deforestation-free palm oil development.

This article was originally posted on the Union of Concerned Scientists’ (UCS) blog. Click here to read the original.

3 March 2014 | A couple of years ago, as I waited for my morning coffee to brew and my toast to, er, toast, I was reading the label of my peanut butter jar and had my entire organic, fair trade world thrown for a loop when I saw that my peanut butter
contained palm oil.

Products we buy every day contain palm oil, which is driving tropical deforestation. See our infographic and get the whole story at www.ucsusa.org/palmoilstory

Palm oil is everywhere. It is found in thousands of products we use every day from cookies, ice cream, and doughnuts to lotions, soaps, and make up. While there are many benefits to the production and use of palm oil, it is also a major driver of tropical deforestation. How was it that my choices as a consumer, which I thought were pretty “green,” could stand in such contrast to the work I’d spent the better part of a decade devoted to?

What I’ve come to learn over the last few years is that the convoluted path that palm oil takes from plantation to product makes it very difficult for even the most environmentally conscious consumers to know whether the products they buy contribute to deforestation. It’s taken me many years and a lot of firsthand experience to fully understand the scope and scale of the problem.

Starting at the beginning

Primary tropical rainforest in Corcovado National Park, Costa Rica. When forests like this are cleared for palm oil production about 80% of the biodiversity is lost.

The first time I ever heard of palm oil was while studying abroad as an undergrad. I’d just spent a week camping on the beach in Corcovado National Park in Costa Rica where I had my first exposure to intact tropical forests. I woke up every morning at dawn to the sound of countless species of birds and insects; saw Agouti, Kuwaiti, and Peccaries (the tropical equivalent of rabbits, raccoons, and wild pigs) every time I hiked through the forest; and dodged mangoes and cashews thrown by White Faced Capuchin monkeys.

Shortly after our bus left the park we drove through a palm oil plantation. What I saw was worlds apart from the forest I’d just left. Gone were all the diverse species of plants and animals, replaced instead with row upon row of identical palm trees, with very little growing underneath, and no animal life in sight.

As I’d come to learn later, only about 15 percent of animal species that are found in primary forests remain after the forest is converted to palm plantations. That two-hour drive was my first experience with the stark reality of what we lose when forests are cleared and replaced by palm oil.

Getting the whole picture

A palm oil plantation on Sumatra in Indonesia. Over the last twenty years plantations like this one have replaced millions of acres of natural forests.

It wasn’t until nearly ten years later, though, when I again spent two hours looking at nothing but palm oil plantations, that the full scope of the problem really hit me.

This time, I was flying over Sumatra, Indonesia. From take-off until landing the view as far as I could see was nothing but palm oil plantations. What I’d seen in Costa Rica was just the tip of the iceberg.

Globally, there are more than 16 million ha of palm oil plantations. That’s an area larger than the state of Georgia! Most palm oil plantations are located in just two countries, Indonesia and Malaysia. While not all of that area has come at the expense of forests, it’s estimated that between 30 and 80 percent of oil palm plantations in those two countries are the result of deforestation. Those forests are some of the last remaining habitat of critically endangered species, like the Sumatran Tiger, Rhinoceros, and Orangutan. When I toured rescue facilities on Sumatra and Borneo I saw dozens of orangutans saved from palm oil plantations, many of which were orphaned babies who’d lost their homes and mothers when the forest was cleared.

Deforestation doesn’t just affect the home of those animals, but ours as well. The clearing of tropical forests releases massive amounts of carbon dioxide, the leading cause of climate change, into the atmosphere.

Worldwide tropical deforestation accounts for around 10 percent of all climate change emissions, and one study estimates every year from 2000 to 2010 land-use from palm oil in just Indonesia produced as much global warming pollution as between 45 and 55 million cars. Flying over the sea of oil palms, spotting the occasional plume of smoke as producers illegally burned their lands for replanting, it was not hard to imagine how demand for palm oil is having such global effects.

What can be done?

Baby orangutans being transferred at a rescue center in Kalimantan, Indonesia. Many orangutans at the center had been rescued from new palm plantations.

Which brings me back to my peanut butter. Having seen firsthand the destruction and devastation that irresponsible palm oil development can cause, I was left wondering if the food I eat and the products I use are contributing to the problem. The answer is that it’s very hard to know for sure.

The road from plantation to product is long and complex. At many points along the supply chain palm oil from different plantations is mixed. This allows palm oil plantation owners who are destroying forests to hide behind the lack of transparency. The best way to hold these bad actors accountable is for the companies that make our cookies, chocolates, conditioners, and cosmetics to commit to not buy any palm oil that causes deforestation and to trace their palm oil back to its origin to ensure it is deforestation-free.

And the best thing for me and you to do to protect tropical forests? Well, the first thing you can do is breathe a sigh of relief, because it’s OK to keep buying products that contain palm oil (no need to give up those Girl Scout cookies quite yet). For reasons I won’t get into here (they involve words like “fungibility” and can be found in our report Recipes for Success), boycotting palm oil has little effect on the amounts and ways it’s produced.

Part of the problem with palm oil is that very few of us have heard of it. Most of us don’t know it’s an ingredient in the products we buy or that it contributes to global warming. So, a few colleagues and I developed an infographic explaining this hidden part of the climate problem.

So be part of the solution—view the infographic.

Then help raise awareness about what palm oil is, how it’s causing global climate change, and how we can pressure companies to adopt deforestation-free palm oil policies.

It may seem like a small thing, given the magnitude of the problem, but little things add up. For instance, last December when the world’s largest trader of palm oil announced a no-deforestation commitment, it called out the role consumer demand played in shaping its policy:

“We know from our customers and other stakeholders that there is a strong and rapidly growing demand for traceable, deforestation-free palm oil, and we intend to meet it as a core element of our growth strategy”

The time to act is now, and companies will listen to you, so what are you waiting for?

Caleb May-Tobin is a policy analyst for the UCS’ work on palm oil. He can be reached at cmay-tobin@ucsusa.org.