The impact melting Arctic glaciers are having on global weather patterns may be common knowledge, but nevertheless, scientists at a press event for the US President’s visit to Alaska drove the message home. Here, Adam Markham of the Union of Concerned Scientists summarizes key points highlighting the region’s distress is a problem for us all. 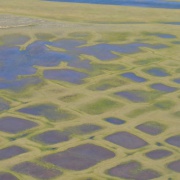 This article was originally posted on the Union of Concerned Scientists blog. Click here to read the original.

1 September 2015 | You already know that rapid loss of Arctic glaciers and ice sheets is helping to speed up the sea level rise that is causing worsening coastal flooding in communities from Maine to Miami. And you probably even know that warming in the Arctic seems to be driving changes to the weather patterns elsewhere on the globe. (If both these things have passed you by, you need to read the recent blog by my colleague Brenda Ekwurzel.)

If you’ve been following the media build-up to President Obama’s trip to Alaska, you’ve also been getting the message that “what happens in the Arctic doesn’t stay in the Arctic.”

The day before the president arrived in Anchorage, I attended a climate science briefing organized by the Alaska Ocean Observing System (AOOS) and WWF that really brought the scientific basis for that message home to me.

The briefing was designed as a “speed-dating event” to introduce some of Alaska’s top climate impacts scientists to journalists who are in Anchorage to cover the President’s visit. Ten scientists were given just five minutes each to get across the essence of what often involved years or even decades of research and why it matters to Americans. Here are some the things we learned.

Just as in the rest of the western United States, warming temperatures are driving an increase in large wildfires in Alaska. In the whole of the forty-year period from 1950-1989 wildfires burned 27 million acres in Alaska. In contrast, in just the last 5 years a staggering 37 million acres have burned. 2015 was the worst fire season ever and smoke from Alaska contributed to haze as far away as Ohio and Long Island. Scott Rupp from the University of Alaska says that every bad fires season like this can wipe out decades of accumulated carbon in the forests and send it back into the atmosphere to contribute to global warming.

According to a new report from the National Research Council of the National Academies, large wildfires are now spreading into some permafrost regions, driven by drier conditions. This is something that is unprecedented in the last 10,000 years, and the most severe fires can burn off the surface vegetation, speeding the thawing of the permafrost below.

The Arctic permafrost contains almost 1500 billion tons of carbon, almost twice what is already in the atmosphere.

In Alaska, according to Vladimir Romanovsky of the University of Alaska, permafrost has warmed substantially since the mid-1980s, even down to 50 meters deep. At some sites on the North Slope, warming has been as much as 6°C at the surface. Thawing permafrost has severe local impacts including damage to infrastructure such as homes, roads and pipelines, and accelerated erosion along the coast.

But the real global danger from melting permafrost is the release of vast quantities of carbon to the atmosphere. Scientists Max Holmes, Susan Natali, and colleagues fromWoods Hole Research Center note that “carbon emissions from thawing permafrost accelerate global warming, so the potential exists for a catastrophic, self-reinforcing cycle of warming and thawing permafrost.” 130-160 billion tons of carbon could be released before 2100—roughly equivalent to 100 times current annual U.S. emissions of carbon from fossil fuels and cement production.

Alaska accounts for more than 50% of the total U.S. fish catch, with the bulk of this being pollock, cod, and flatfish. Alaskan fish populations clearly respond to temperature fluctuations, including climate change and cyclical variations such as El Nino. Because of warming ocean temperatures, cold-water species are being pushed northwards and more southerly species such as albacore tuna and ocean sunfish are being seen more frequently in Alaskan waters.

Recent research led by Gordon Kruse at the University of Alaska has demonstrated variations in predation of different age classes of pollock in response to warmer temperatures, the net effect being higher juvenile mortality and therefore slower population growth. There are numerous other impacts on fisheries too. Snow crab catch is correlated with sea ice extent and red king crab juvenile mortality is also affected by the condition of sea ice. In the absence of sea ice, the phytoplankton blooms occur too late for the juvenile crabs that depend on them for food in the first few days of their development.

5) Ocean acidification too? Really? Can’t fisheries get a break?

Ocean acidification is climate change’s evil twin. It doesn’t occur as a result of climate change, but is a direct result of increasing levels of carbon dioxide in the atmosphere.

When CO2 dissolves in seawater it lowers the pH of the water and this acidification has the capacity to dissolve or degrade the calcium carbonate shells of species such as crustaceans, shellfish, corals, and calcifying phytoplankton.

Many Alaskan waters are particularly vulnerable to ocean acidification because of other factors that contribute, including freshwater input from glaciers and rivers, the capacity of cold waters to absorb more carbon dioxide, and upwelling from carbon dioxide rich deep waters. New research by scientists from NOAA, the University of Alaska, and the Woods Hole Oceanographic Research Institute predicts that ocean acidification will overwhelm the ability of marine calcifiers to build and maintain their shells within a decade in some Alaska waters. The threshold could be reached by 2025 in the Beaufort Sea, 2027 in the Chukchi Sea and 2044 for the Bering Sea, threatening the red king crab and snow crab fisheries among others.

A warming and drying trend in Alaska is causing lakes to lose water and shrink. In fact Alaska is now losing 0.8% of its wetland area annually.

A recent study of 123 lakes in the state has shown that lake size is the best predictor of species richness. As lakes shrink, so too will the diversity of species they support. Birds that spend the summer in Alaska and breed there, and then spread out throughout the United States and beyond via a series of major migration flyways in the spring and autumn. Negative impacts of climate change on breeding success in Alaska will have ramifications for migratory birds including ducks, shorebirds, loons, and terns across the United States and probably in your local parks and wetlands.