Indigenous people and traditional communities are among the best stewards of the land, but their impact is often unappreciated, while their tenure is tenuous at best. To press the issue into the open, the World Resources Institute and 13 partners have launched an interactive platform that lets users map the relationship of people and their land. 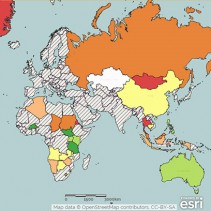 23 November 2015 | Forest communities have long been among the best stewards of the land, and the forests they manage inhale carbon dioxide and store billions of tons of carbon. This natural inclination to act as a good steward of the Earth they occupy means forest communities play a significant role in reducing global emissions and curbing climate change.

However, national laws and the ways of encroaching economic development makes the seemingly simple situation of indigenous or rural people maintaining historical forestland as they have for centuries complicated. The World Resources Institute (WRI) estimates, globally, 65% of land is inhabited by indigenous peoples and communities. They live under customary tenure arrangements, which are in accordance with indigenous or local traditions, but lack legal ownership rights. Only 10% of indigenous peoples and communities claim legal ownership on the land they manage.

And since the land isn’t properly demarcated, they’re sometimes subject to short-term investor and government whims, which often result in environmental degradation. On the other hand, securing community land rights could result in big emissions reductions. A study released this month found securing community forest rights in Brazil and Guatemala could prevent 5.4 billion tonnes of emissions over the next 20 years while delivering substantial economic benefits.

So it’s as much a climate issue as it is one of human rights.  And many in the climate space feel community land rights should be viewed as a tool in curbing climate change and a component in an international climate agreement.

“The research is clear,” says Peter Veit, the Director of WRI’s Land and Resources Rights initiative. “When communities have secure rights to their forest land, there are lower rates of deforestation and healthier carbon-rich forests.”

WRI brought this issue to the fore this week with an interactive, first of its kind online platform that seeks to solve an underlying, yet fundamental, challenge facing collectively-held lands and their people: a lack of maps. The platform is called LandMark and WRI launched it on Tuesday in partnership with 13 land rights organizations, including the Rights and Resources Initiative. LandMark provides the much needed mapping data on the many boundaries and regions of indigenous and community lands.

Veit says this mapping tool can help mobilize forested nations to not only implement or strengthen community land laws, but incorporate community land rights into their climate mitigation strategies.

“Secure rights coupled with protection of those rights leads to positive forest cover outcomes with significant implications for climate change,” he says.

Marking the Land with LandMark

Currently in beta, LandMark compiles data from hundreds of sources to map indigenous and community territories around the world. It also determines the percentage of land indigenous peoples and communities use and hold and offers information regarding the legal security of community lands. Additionally, LandMark is a living platform that WRI and its partners will continue to update as more data becomes available.

“Secure rural tenure for all is a logical platform for more inclusive economic growth. Securing community lands is as much about looking forward to a sounder future as about remedy of legally dubious and unjust pasts,” Abdon Nababan, Secretary-General of the Indonesia’s Indigenous Peoples’ Alliance of the Archipelago (AMAN), said in a statement.

Collectively-held land is on all continents except Antarctica and in every ecosystem and climate, making this a pertinent and significant issue for all. According to LandMark, indigenous peoples and communities operate nearly 80% of Africa under customary tenure, for instance.

WRI aims for the tool to raise awareness and increase engagement in order to help people protect their land.

Early data from the tool shows many governments view indigenous and community land as vacant or idle, and therefore ripe for development. But these groups now have the opportunity to be proactive about their land. Whereas before, they were only reacting to imminent threats, like a mining company arriving to operate on community land, Veit wrote in a recent blog post.

“Shining a light on indigenous and community land reduces the likelihood that irregular acquisitions and expropriations go unnoticed, and helps protect the livelihoods and well-being of billions of rural people,” Veit said.

Shining a light is important because the threats to indigenous tribes and rural communities are large-and weak legal protection only enhances the threats. While strong legislation that warrant protection won’t solve the problem entirely, it’s absolutely necessary, WRI says.

And according to more early findings, land tenure laws are stronger in certain developing countries than developed.

This story was adapted from media provided by the World Resources Institute and the WRI blog. Click here to read the blog in full. Kelli Barrett is a freelance writer and editorial assistant at Ecosystem Marketplace. She can be reached at [email protected]