Accurate real-time deforestation measurements have always been fuzzy at best, in part because satellites couldn’t resolve objects smaller than 500 meters (1,640 feet) across. But a new system developed by Alessandro Baccini and his Woods Hole, Massachusetts, research team can see objects just 30 meters (98 feet) across. That should make real-time deforestation measurements – and carbon accounting – more precise in real time. 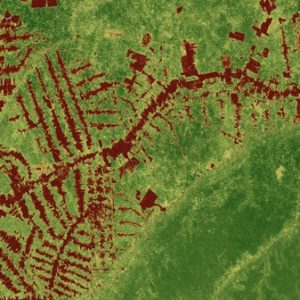 This story first appeared on MongaBay. Click here to view the original.

8 January 2016 | Critics of REDD+, the carbon offset policy designed to preserve tropical forests, argue that the notion that tropical countries will accept huge sums from developed countries to not clear their rain forests — if offered more lucrative deforestation opportunities — is not just a fallacy, it’s unverifiable.

But that’s changing. Rapidly. Dramatically. With greater precision than ever.

In the past, deforestation verification was inexact: relying on static, blurry satellite images with poor resolution — imaging systems couldn’t see anything smaller than 500 meters across. Over the course of a year, scientists would compare fuzzy images of a specific tropical sector and estimate — guess, really — how much forest had gone missing. Then they would estimate again how much carbon storage capacity was removed. Another guess.

Now, Alessandro Baccini, a remote sensing scientist and his team at Woods Hole Research Center in Falmouth, Massachusetts, are reducing the guesswork. They have gained the ability to track a forest sector in real time, at 30 meters (98 feet), not 500 meters (1,640 feet). The dramatic difference in precision is best illustrated in a photo provided by Woods Hole — the equivalent of a myopic person getting a new pair of glasses.

“For each 30-meter cell in the entire tropics, if that cell is deforested we know the carbon density of that vegetation before, and can make an accurate comparison,” Baccini said in an interview with Mongabay at COP21. “A 30-meter cell is a pixel size — a minimum unit of a satellite image.

“And it’s a huge difference. The problem before: when it was 500 meters, you couldn’t detect deforestation at smaller scales, like trees cut down here and there. So much critical information was missing. There was this mismatch between the carbon density and the deforestation. Now we’ve solved that mismatch.”

The methodology Woods Hole uses is multifaceted. It employs:

“The types of forest degradation that cause carbon emissions, such as selective logging and fire, can be quantified and monitored [now] using current satellite technology,” said Asner. “Aircraft-based technology is much more accurate, however, and can be use to train and improve satellite-based approaches. Together, the two scales of activity readily resolve the effects of forest degradation on carbon emissions.”

“This combined data really makes [deforestation results] more transparent and easier to understand, and should provide more confidence [to REDD+ participants and critics, demonstrating] that we know what emissions come from deforestation,” Baccini said. “You can see it on the screen. It’s not blurry. It’s easy to measure. Every GIS technician can do it.”

Baccinbi added: “If you want REDD to be successful and stabilize the concentration of CO2 in the atmosphere, to have a big impact on [stabilizing] the climate, REDD needs to be able to measure emissions on a global scale. It needs to be transparent and reliable.

“And you need data that is consistent across countries, consistent across political boundaries and that everybody can access and use. Any estimate that comes out would be easy to assess, understand and explain.” The new satellite imaging refinements now available offer all these capabilities, and those sophisticated systems are about to go to work monitoring global tropical forests in a big way.

On November 30th, the opening day of the 21st UN climate summit, Norway, Germany and the United Kingdom pledged up to $5 billion US between now and 2020 to support REDD+ projects around the world. Colombia, for example, which has been approved as a REDD+ participant, will receive $100 million from the three countries to reduce deforestation and forest degradation in the Amazon. Colombia is part of what’s called the REDD Early Movers Program.

Nearly all REDD+ agreements are designed to be results based. Tropical countries are not paid for preserving forests unless they can demonstrate, year after year, that deforestation is not taking place, and that an equivalent carbon offset in standing forest exists for the industrial carbon-emitting nation offering payment.

Chris Meyer, a senior manager on tropical forest policy for the Environment Defense Fund in Washington, D.C., said at COP21 that Colombia can benefit from the new improved Woods Hole methodology.

“There is no one answer to every situation, but this will start slowly turning the ship around,” Meyer said. “Verification is complex. It’s multiple things — including hiring more inspectors [on the ground] to enforce laws against deforestation. But the Woods Hole work definitely has a role to play.”

“Our confidence in the ability to track outcomes is quite good and getting better and better over time. We now have [Woods Hole improved imaging] global data sets to actually monitor what’s happening on the ground — the coverage of the forest torn down, and how much carbon was there to begin with. On both sides of that, we are getting better and better on how we track those things.”

Tropical forests store 25% of global carbon and harbor 96% of the world’s tree species. Now, thanks to the new satellite imaging systems, it will be possible to track forest carbon storage tree-by-tree, hectare by hectare, making REDD verification of deforestation far more accurate.

Justin Catanoso is director of journalism at Wake Forest University in North Carolina. His reporting is sponsored by the Pulitzer Center on Crisis Reporting and the Center for Energy, Environment and Sustainability at Wake Forest.