The United States has always been a leader in green technologies, despite the best efforts of the Bush and now Trump administrations to undermine them. During the French Presidential election, eventual winner Emmanuel Macron made a direct and audacious appeal to US climate workers. Will he keep it? 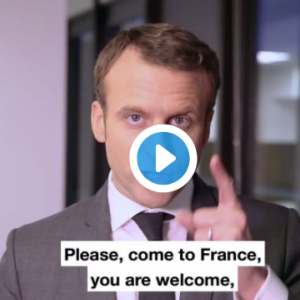 8 May 2017 | As climate negotiators gather in Bonn, Germany for two weeks of climate talks under the specter of US President Donald Trump’s potential withdrawal from the Paris Climate Agreement, a three-month-old video by French President-Elect Emmanuel Macron has gone viral again on social media.

In the video, Macron addresses US climate scientists directly, and in English: “Please come to France,” he says. “It is your nation.”

“I do know how your new President now has decided to jeopardize your budget, your initiatives, as he is extremely skeptical about climate change,” he said. “I have no doubt about climate change and how committed we have to be regarding this issue, so I have two messages. The very first one is for the French and European researchers – we will preserve our budgets, we will reinforce our investment, our public and private investment, in order to do more and accelerate our initiatives in order to deliver in line with [the Paris Climate Agreement].”

Since Macron posted the video via twitter in February, Trump’s anti-climate activities have become legion. Last week, he killed the EPA’s climate-change pages (which Chicago Mayor Rahm Emmanuel promptly re-created on the city’s own site, and over the weekend he buried a site designed to educate children on climate change. Meanwhile, he’s implemented other environmental policies that could cost 220,000 rural jobs.

At the Marrakesh climate talks, several green entrepreneurs told the Bionic Planet Podcast that they may be forced to leave the United States if Trump follows through on his more draconian policies, and Macron’s message is clearly targeted to them.

“We like innovation, we want innovative people, we want people working on climate change, energy, renewables and new technologies,” he said. “France is your nation. Thanks.”

2 thoughts on “Will New French President Keep Pledge To Hire US Climate Workers?”