The European Environmental Markets, a new spot trading platform for European Union Emissions Trading System participants, is betting the problems that have plagued the granddaddy of carbon trading programs are a thing of the past. CEO Adrian Rimmer hopes the launch of the new platform marks a new wave of investing and interest in the European market. 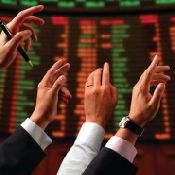 While EEM is not the first spot exchange for the European Union’s Emissions Trading System (EU ETS), the once-popular trading option hasn’t been available since 2012. That was when the French exchange BlueNext dissolved after handling more than 1.1 billion metric tonnes of European Union (EU) permits during its prime.

European policymakers saw a bright, shining future for the newly created EU ETS when it launched in 2005. The system enacted pollution caps on nearly 12,000 power plant and other industrial entities. Those that could not reduce their emissions could trade EUAs to comply.

But the EU ETS experienced growing pains that ultimately led to the demise of exchanges such as BlueNext, including outright fraud and a phishing scam that tarnished the reputation of the trading program. However, the bigger challenges for these exchanges may have been the regulatory policies that led to a glut of allowances, with an estimated 1.5-2 billion tonnes flooding the market, and a global recession that pressured demand for the permits.

After years of these challenges, only two exchanges remained standing: the Intercontinental Exchange (ICE) and the European Energy Exchange (EEX).

Despite this turbulent history, newly-launched European Environmental Markets’ CEO Adrian Rimmer believes the time to enter the market is now, especially after EU officials signed off on a plan last year to shore up the EU ETS by withholding 900 million permits from 2014-2016, a temporary solution known as backloading.

“We’re in the fortunate position of having been able to wait for what we think is the right time – clear rules, backloading appearing to be addressed, clarity that the emissions regulation is entrenched and expanding and that the ETS will remain a core part of EU policy,” he said.

But with two exchanges already on the market, why a third? The answer comes back to spot transactions.

Both ICE and EEX offer same-day trading under a daily futures contract, but neither offers spot trading. While the length of time between the two transaction options may be small, it can translate into major differences for corporate compliance entities.

Many organizations do not have a mandate to trade in futures. Even if they do, futures require lines of credit, which entail more management and overhead that spot transactions can skip. “Certainly from a CFO perspective, the lack of a need for credit will be very attractive,” Rimmer said

The organization’s single-minded focus on spot will also lower running costs, to the benefit of its users. Many of the failed exchanges from the past combined multiple sets of proprietary software in their operations – leading to extravagant information technology costs. The older software also required a large back office, since hardly anything was fully automatic.

“It was a lot of behind the scenes,” Rimmer said. “You’d have an electronic front end, but actually a lot of manual processes in the background. People would be running around with bits of paper, posting things and downloading forms.”

EEM’s trading platform is fully automated. It was created by the exchange’s Executive Chairman Wayne Sharpe 25 years ago when he founded the commercial organization Bartercard. Since then, Bartercard has become one of the largest online exchanges in the world and has facilitated over $40 billion in trade via more than 30 million transactions.

What this means for the carbon market is that Sharpe’s platform has been tested for more than 20 years and been upgraded at a cost of more than tens of millions of dollars. The past 3-4 years has been spent tailoring the platform for the European environmental markets.

Looking to the Future

While EEM will test the waters with the compliance markets, Rimmer will not be letting go of his Gold Standard Foundation past completely. The exchange will begin with compliance markets, but then seeks to cover all European environmental markets including voluntary carbon, renewable energy, water and biomass.

“My goal through the Gold Standard has been two things: to continue to demonstrate why carbon markets and climate finance can be credible,” he said “And the second piece is trying to bring that tangible financial value to a wider range of environmental impacts and social impacts than just carbon.”

With the Gold Standard still working on measuring non-carbon impacts through, for example, a proposed Water Benefit Standard, Rimmer hopes to now broaden the financial instruments available to the carbon markets.

“Having focused on credibility for the last five years, I want to focus on liquidity in the market,” he said “It doesn’t matter how credible it is if nobody can access the market and no one can trade in it.”