Prices for voluntary carbon offsets plunged to a record low in 2015, according to Ecosystem Marketplace’s latest “State of the Voluntary Carbon Markets” report, but market participants see the Paris Agreement and a flurry of tangential initiatives lifting prices in 2016. 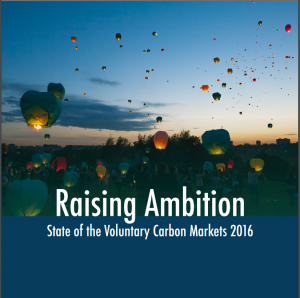 As Director of Business Development at carbon strategy consultancy EcoAct, low prices are bad for business, and the report identified a record low of $3.30 per metric ton of greenhouse-gas emissions reduced in 2015, albeit on a 10% increase in transaction volume as companies and governments around the world purchased 84.1 million offsets, each equal to one metric ton of carbon dioxide kept out of the atmosphere.

Kelley Hamrick, a Senior Associate at Ecosystem Marketplace and the report’s lead author, pointed out that many of the offsets transacted last year had been generated in previous years. Speaking at Carbon Expo in Cologne, Germany, where the report was launched, Hamrick explained that 87% of the market’s total supply of carbon offsets were from pre-2015 with an average price of USD $2.70 per tonne. Pre-payments for offsets expected to be generated post-2015, however, were sold at an average price of USD $7.20.

She stressed, however, that prices varied widely due to a multitude of factors like location and project type. Put simply, “price is a very variable thing,” Hamrick said.

But for Theisen and other market participants speaking at the report’s launch event – including Daniela Spießmann, who directs the GoGreen initiative of logistics giant DHL, Zubair Zakir, Global Carbon Director at Natural Capital Partners, and Noémie Klein, a Principal Consultant at clean energy group Ecofys – the big story was the way offsets are being deployed.

“Some companies were [buying carbon offsets] for carbon neutrality purposes and that’s it, but others were taking a more holistic approach,” said Theisen. “The question we’re having in 2016 is: ‘How can we make this approach more integrated?’”

He projected higher prices as the Paris Agreement moves forward and companies align their practices with the United Nations Sustainable Development Goals (SDGs).

“There’s this new awareness around sustainable development besides carbon, which has translated into some market participants wondering if they can turn these into alternative finance sources,” Hamrick said. “As companies and other offset buyers are now wondering if there is a way to capitalize on the co-benefits of carbon offset projects, some standards have started developing metrics to measure non-carbon benefits.”

Theisen cited new initiatives such as the Gold Standard 3.0 as evidence of this holistic approach. The standard strives to address climate and development together and specifically mentions tackling the nexus that links climate, energy, food and water.

He also identified new carbon-focused initiatives that might drive future demand, including the Science-Based Targets initiative, which has support from nearly 50 corporates around efforts to keep global temperature increases below 2 degrees Celsius, and an increase in carbon pricing initiatives.

If you missed us at Carbon Expo, check out the edition of Bionic Planet that we posted from Cologne, featuring William Theisen, Daniela Spießmann, Zubair Zakir, and Kelley Hamrick. Available on iTunes, TuneIn, and Stitcher, as well as streaming here:

You can also listen to the entire launch event, streamed in raw form on SoundCloud:

From Offsetting to Insetting

Although not tracked in the report, all panelists identified insetting as a practice that will drive emissions down further in the future.

That’s when a company helps a supplier reduce emissions so as to reduce the company’s total impact, but the offsets are not “traded” and therefore do not show up in Ecosystem Marketplace data tracking annual market transactions. However, an upcoming Ecosystem Marketplace report analyzing corporate climate disclosures to CDP will dig into data on insetting to give a sense of its scope and scale.

The majority of market buyers are from the private sector, and most of them are returning participants. Hamrick noted that two new sectors, events/entertainment and the services industry, took center stage in 2015, rising to the top of the buyers’ list.  The previous top buyers sectors – transportation, finance and energy – were edged out, though these spaces remained solid buyers.

Bringing in new buyers is key to expand the market, Theisen noted. He thinks the SDGs will help with this challenge, capturing entities that realize carbon offset projects can address both climate and development problems in tandem.

The report’s research also included questioning participants as to why buyers purchase particular offsets as opposed to others. And while the respondents’ answers turned out to be somewhat vague, saying the offset provider of choice was a good “fit”, Hamrick interpreted the responses to mean offsets are chosen for a mixture of motives and buyers usually consider how several factors such as cost, co-benefits and location work together.

“I think one of the key takeaways that we can say about companies engaging in voluntary offsetting is they’ve usually already looked at their emissions, they’ve tried to reduce as much as possible, and they’re at that point where they say, ‘Okay, I want to go above and beyond,’” Hamrick said.

This rings fairly true for Deutsche Post DHL, the German logistics company, which began exploring offsetting in 2005 – before there was much consumer attention on corporate climate action. Because carbon is the main environmental impact of their business, the company offered a carbon neutral (now climate neutral) package to customers first in 2006. It expanded on this over a two-year period until it became DHL’s comprehensive GoGreen Environment Protection Program, essentially restructuring the company’s transport system. DHL’s strategy doesn’t include a carbon price right now, so the company will re-assess their plan in 2020. Right now the emphasis is on green technology investments, Spießmann said.

She noted quality as well, that customers want to know that the offset projects are properly implemented and emissions are truly reduced. Report data backs up her observation as it found 98% of offsets bought were verified by an independent third-party standard.

Spießmann also adds that DHL’s interest in becoming more efficient is as much a part of their strategy as is the offsetting that allows customers to go carbon neutral. She mentions that in Bonn, certain parts of DHL’s operations have been switched to function fully on green energy and is looking at ways to expand.

Carbon offsets aren’t something a business should only do “on top,” Spießmann says, but rather integrate them into a company’s overall environmental approach.

And DHL is hardly an exception. Such companies as Microsoft, Marks & Spencer’s and General Motors have programs in place and are leveraging carbon markets to raise awareness while reducing their emissions.

“Where we saw companies traditionally focusing on business travel, then Scope 1, Scope 2 and now they’re diving into Scope 3,” said Theisen, referencing the three types of emissions. These scopes range from direct (Scope 1, for instance, the generator in the office building) to indirect (Scope 2, electricity) to even more indirect (Scope 3, travel or supply chain emissions), which is beyond the facility walls. Hamrick explains Scope 3 emissions are the most difficult to address because often they are taking place far away from a store or factory.

Hamrick also alluded to the aviation industry and its potential to be a game-changer for the voluntary carbon market. The International Civil Aviation Organization (ICAO) aims to achieve carbon neutral growth starting in 2020. It plans to do this partly through advanced technologies that increase fuel efficiency while decreasing emissions, but it’s clear for ICAO to achieve this goal, it will have to use carbon offsets – potentially creating a demand for hundreds of millions of tonnes, according to ICAO’s own projections.

The market-based mechanism ICAO creates is still in the works and many of the voluntary carbon market standards are lobbying for inclusion, according to the report. Also, several environmental groups, including Ecosystem Marketplace’s Forest Trends, are pushing for ICAO to accept Reducing Emissions from Deforestation and forest Degradation offsets. That is a work in progress as well.

If standards such as the Verified Carbon Standard, the Gold Standard, the American Carbon Registry, or the Climate Action Reserve were folded into an ICAO market-based mechanism, it could be a game-changer for offset suppliers that are currently struggling to find buyers on a relatively stagnant market, the report reads.

Hamrick said the voluntary market has the ability to ramp up supply rapidly if there is perceived demand, and inclusion in ICAO’s system would indeed be ample demand. “If the ICAO market-based mechanism came through, we could see a lot more supply come on the market pretty quickly,” she said.

However, Hamrick said if, and the report notes it’s entirely possible voluntary programs will be excluded.

When countries formally pledged to curb climate change and limit emissions, they essentially placed themselves under compliance agreements, and the report authors write that it’s fair to wonder how relevant voluntary offsetting will remain in light of this expected paradigm shift.

While it remains an open question, the report suggests there will always be companies looking to take “above-and-beyond” action and, as such, will utilize voluntary markets. And, the report authors write, there are always leaders that genuinely recognize the threat that is climate change and are motivated to do everything they possibly can to avoid its most dangerous impacts.

To get the inside scoop on Raising Ambition: State of the Voluntary Carbon Markets 2015, be sure to join us on Wednesday June 15th at 11 a.m. EST for a webinar presentation hosted by the Climate Markets & Investments Association. Speakers will include lead report author Kelley Hamrick, Sean Penrith of The Climate Trust, and Marc Baker of Carbon Tanzania.