Indigenous Peoples from the Arctic and the U.S. Southwest have joined together to tackle issues of food sovereignty in two environmental extremes. Their bond led to a swift response to COVID-19. 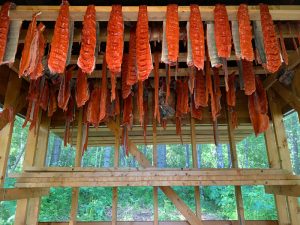 22 January 2021 | On one level, the Arctic and the U.S. Southwest have little in common: One has kilometers of bone-chilling temperatures, ice, and months of darkness; the other has towering cliffs of red rock, parched soil, and broiling summers.

But Indigenous Peoples in each region face similar challenges to food resilience and sovereignty. Because of the colonization of Native lands, Indigenous Peoples have been restricted from accessing, cultivating, and managing their traditional foods. At the same time, climate change in both regions is rapidly altering the landscape.

The Indigenous Foods Knowledges Network (IFKN) connects Indigenous and non-Indigenous scholars, community members, and leaders from the Alaskan and Canadian Arctic and sub-Arctic and the U.S. Southwest to coproduce food sovereignty solutions. The research coordination network was created in 2017 by the University of Colorado and the University of Arizona and is driven primarily by Indigenous community leaders and scholars.

Members of the network exchange knowledge about ways to maintain traditional ways of life, from river restoration, community gardens, and farming practices to culture camps in which Indigenous Knowledges are shared with future generations.

The COVID-19 pandemic has added urgency to the project, because Indigenous elders, who are often the knowledge carriers, are especially at risk from the coronavirus.

The network focuses on a cornerstone of culture: food.

“It’s not just something [we] physically eat, but it’s part of our ceremonies….It is our connection to the land, to our nonhuman kin,” said Mary Beth Jäger, a member of the Citizen Potawatomi Nation and a research analyst at the Native Nations Institute at the University of Arizona who serves on the IFKN research coordination team. Jäger spoke about IFKN in December at AGU’s Fall Meeting 2020.

Commercial interest in the traditional southwestern tepary bean by non-Indigenous customers is driving up prices and reducing access.

Yet access to traditional foods for Indigenous Peoples is strained.

In the Arctic, ice is thinning dangerously under hunters’ feet. Animals like beavers have strayed from their natural habitats, bringing new diseases, such as giardiasis, to communities unfamiliar with them. In the Southwest, repeated droughts have left crops thirsty, and monsoon rains are changing in intensity.

Commercial pressures threaten food security, too. In the Arctic, the Gwich’in have sued the Trump administration for charging ahead with oil and gas leasing in the Arctic National Wildlife Refuge, which is part of the tribe’s caribou habitat. Commercial interest in the traditional southwestern tepary bean by non-Indigenous customers is driving up prices and reducing access to the food staple.

Communities shouldn’t have to face these issues alone, said IFKN steering committee member and Native Movement deputy director Shawna Larson, who is also the vice chairwoman of the Chickaloon Village Traditional Council. “We can learn from one another, teach each other, and also work together on finding different solutions.”

In the Southwest, the Gila River Indian Community has experience fighting for—and winning—rights to traditional resources. The community won the largest Native water rights settlement in history in 2004 to restore access to water taken by colonial settlers starting in the late 1800s.

Members of both communities hosted delegates from IFKN to share these success stories.

Even though Indigenous Peoples have cultivated a deep understanding of lands and ecosystems, Western science has often disregarded these ways of knowing or even co-opted them.

“Indigenous Knowledges go through the ultimate peer review process,” said Lydia Jennings of the Pascua Yaqui and Huichol Nations. Jennings is an IFKN steering committee member and recently received her Ph.D. from the University of Arizona.

“The knowledge one generates, say, [about] where an animal lives, where certain plants grow, is more rigorous because it literally means survival for communities who depend on traditional food or subsistence food traditions,” Lydia said. “If you collect inaccurate data, you might not eat or [you might] get sick.”

The network harnesses multiple ways of knowing, which Jennings likens to “braiding knowledge systems together.”

Although the network includes some non-Indigenous researchers, those researchers center Indigenous Peoples, their communities, and Knowledges at the forefront and follow the lead of Indigenous members, said Jäger. The network is funded by a National Science Foundation program that emphasizes studying social systems alongside the natural and built environments.

Braiding these knowledge systems together is “very healing, in the sense of passing that knowledge down that’s been tried to be broken and to be removed out of the culture by colonization,” said Jäger.

Meetings on the Land

The backbone of IFKN involves visits to Indigenous lands to share stories, foods, and Knowledges. Issues discussed range from ongoing river restoration projects, getting traditional foods into nursing homes, and the effects of colonial mining and extraction on food and medicinal plants.

“We eat a lot when we’re together. And we have really good laughs.”

The first visit was by invitation from the Gila River Indian Community in 2018. “That’s a big, important thing for us, that we’re invited,” said Jäger. The network also compensates its hosts.

Importantly, participants say, meeting on the land provides space for deep connection. “There is a difference in how we act and how we talk,” said Jäger. “We eat a lot when we’re together. And we have really good laughs.” After one trip to Finland, Larson told a fellow attendee, a member of a Skolt Sámi community, that “she was like my sister.”

Members of IFKN have met with communities within Finland, Alaska, and Arizona. COVID-19 dashed plans to gather in person at the Hopi reservation, but the network had already planned a series of online webinars.

Quick to Pivot to COVID-19

The strong bonds of the network made it possible to quickly react to the pandemic.

IFKN members received a National Science Foundation rapid response grant to study the effects of COVID-19 on food access for Indigenous communities in the Arctic, the sub-Arctic, and the U.S. Southwest.

Interviews of Indigenous community members and data analysis will begin this month, and the grant will run for 1 year. Althea Walker, a tribal climate science liaison at the Southwest Climate Adaptation Science Center at the University of Arizona, said the grant is important to understand the immediate vulnerabilities from COVID-19.

“Overall, addressing these vulnerabilities that have become apparent during the COVID-19 pandemic allows us to be better prepared for other crises, like the climate crisis,” Walker said.

Jenessa Duncombe is a News and Features Writer for Eos, where this story first appeared. She has a master’s degree in physical oceanography from Oregon State University.

This story is published as part of Covering Climate Now, a global journalism collaboration strengthening coverage of the climate story. It first appeared in Eos, the magazine of the American Geophysical Union.