The chocolate business has decimated forests in Ghana and Côte d’Ivoire, but chocolate companies have promised to clean up their act. Trouble is, only a few have embraced agreed on practices for doing so. 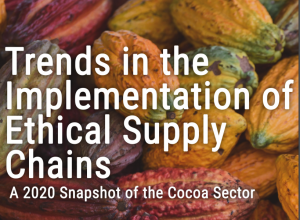 17 February 2021 | You’ve got to hand it to those clerks of the old British Empire. Their records were good enough to identify the first farmer who planted cacao trees in Ghana way back in the 1870s. His name was Tatteh Quarshie, and he grew the trees from a handful of cocoa beans he’d acquired in Equatorial Guinea. Thus did a fruit that evolved in the understory of the Amazon, and which the Mayans called “Fruit of the Gods,” become the primary cash crop of Ghana and Côte d’Ivoire. Today, these West African nations provide 70 percent of the raw cocoa on which the $180 billion chocolate industry depends.

Don’t, however, expect most of those multi-billion-dollar candy conglomerates to tell you which farms they get their beans from — or whether they’re the product of child labor or came at the expense of precious endangered forest, more than 90 percent of which have disappeared in these two countries since the 1990s.

That’s because just nine of the world’s 69 leading chocolate companies report being able to trace their supplies to individual farms, although an additional 30 companies say they’re in the process of doing so. At the same time, just six are implementing sustainability best practices agreed to under the Accountability Framework Initiative (AFi), which is a global environmental coalition formed in 2019 to end deforestation in commodity supply chains.

These are some of the findings in a new report called “Trends in the Implementation of Ethical Supply Chains,” which was published jointly by AFi and the Forest Trends Supply Change initiative, which tracks self-reported progress towards sustainability targets.

The six companies that report developing commitments in accordance with AFi guidance for their cocoa supply chains are Barry Callebaut, Cargill, Mars, Olam, Mondelez, and Unilever.

Cocoa has been a key driver of deforestation in many countries, but most of the cacao trees planted in Ghana and Côte d’Ivoire since 1990 are losing their productivity sooner than expected – in part because cacao thrives in shade and suffers in direct sunlight. As productivity drops, impoverished farmers move into the remaining forest, decimating valuable habitat and accelerating climate change.

To avert disaster, dozens of chocolate companies have vowed to help farmers plant back better. In 2017, they created the Cocoa & Forests Initiative (CFI), which aimed to end deforestation by, among other things, supporting the adoption of agroforestry techniques and implementing procedures for tracking and tracing sustainably-produced supplies.

”We see growing ambition, but not all commitments are created equal,” says Philip Rothrock, who manages the Supply Change initiative and co-authored the report.

“More than half – or 38 – of the influential companies we tracked have sustainable cocoa commitments, and half of these – or 18 – are reporting progress toward those goals,” he added. “Furthermore, 28 are conducting some sort of risk assessment for deforestation in their cocoa supply chains, while 39 are implementing traceability systems.”

AFi was formed in 2019 in response to corporate concerns about the diverse and often contradictory reporting demands from environmental NGOs. Under the guidance, corporate commitments to end deforestation should meet basic criteria, such as including a target date, covering the company’s entire supply chain, and not just certain commodities.

“There’s still room for companies to broaden the scope of their commitments to be more comprehensive,” says Rothrock. “For example, many company commitments still do not include due dates nor do they cover all the regions they source from or all of the subsidiaries and joint ventures they control. Clearly, the devil is in the details.”

He emphasizes that governments of producer and consumer nations also have a role to play in promoting sustainable supply chains and points to earlier research, also from Forest Trends, showing that demand-side regulations can have a dramatic effect on forest cover.

“Emerging legislation in the EU, UK, and US to control imports of commodities linked with deforestation could be game changer,” he says. “By requiring greater transparency within cocoa supply chains, this could help level the playing field.” In fact, three influential companies Mars, Mondelez, and Barry Calbuat, alongside several environmental groups have already called for stronger environmental and social requirements for EU legislation. In making these changes, these consumer markets could have strong leverage to encourage sustainable production, but the key is how will governments enforce these upcoming rules and how will companies meet them?

This story is part of a two-part series called “Ripening Cocoa ”, which is a companion to the intermittent series “Forests, Farms, and the Global Carbon Sink.”