Farming generates 15% of all greenhouse gas emissions, and an “Investment Fair” on the sidelines of UN talks in the Hague aims to change that by funneling investment dollars into sustainable agriculture projects that capture carbon in soil.  Three deals have already been signed to fund five projects, but more scale is needed. 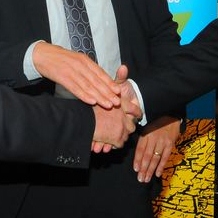 Farming generates 15% of all greenhouse gas emissions, and an “Investment Fair” on the sidelines of UN talks in the Hague aims to change that by funneling investment dollars into sustainable agriculture projects that capture carbon in soil.   Three deals have already been signed to fund five projects, but more scale is needed..

4 November 2010 | Hans Hoogeveen may not have gotten everything he wanted, but he’s off to a good start.

A Professor of Practice in Natural Resource Policy, Hoogeveen also serves on the advisory board of Ecosystem Marketplace publisher Forest Trends and is the man “responsible for International and European Affairs, Agrochain, Trade, Fisheries and implementation of European Union policies” in the Dutch Ministry of Agriculture.   In that capacity, he spearheaded an Investment Fair which runs through Thursday as part of the International Conference on Agriculture, Food Security, and Climate Change in the Hague.

It’s now three days into the fair, and three deals have already been inked.   Together, they put roughly $2 million into five projects that are helping poor farmers work their land in a sustainable way.   More importantly for the long-term viability of the projects, they do so by harnessing carbon finance to reward farmers for adopting sustainable practices that capture carbon in the ground.

The first deal was signed on Monday, and it’s more of a grant that promotes investment than it is an actual investment.   Under it, the Rockefeller Foundation is putting $1.5 million dollars into three projects:

The second deal was inked on Tuesday, and more closely resembles the kind of payment for ecosystem services that can bring the value of nature into the production stream.   Under it, the Dutch minister for Agriculture and Foreign Trade, Henk Bleker, signed a financial commitment with the investment fund Food 4 All, which invests in smaller companies and cooperatives in East and West Africa.

The third deal was inked on Wednesday, and is a the first soil-carbon project approved in Africa.   Under it, the World Bank is purchasing carbon credits from Vi Agroforestry, an NGO that has been active in Eastern Africa since 1983.   The credits will be sold to the BioCarbon Fund, and the project makes it possible for small-holder farmers in Kenya to access the carbon market and receive carbon revenues through the adoption of productivity enhancing practices and technologies.

In the coming weeks, we will be profiling all of these projects in detail.

How the Fair Works

The fair brings investors and developers together in a central marketplace, much the way pitchfests bring together screenwriters and producers.

Every night, starting around 6pm, project developers and potential investors get together in a room.   They participate in a panel discussion laying out the evening’s themes, and then a handful of developers whose projects are relevant to the theme take turns delivering three-minute pitches.

The larger conference within which the fair operates grew out of the 17th Session of the United Nations Commission on Sustainable Development (CSD-17), which took place in New York in May of last year and was chaired by Gerda Verburg, the former Dutch Minister of Agriculture, Nature and Food Quality.

She had commissioned presentations from Wageningen University & Research Centre in Dutch city of Wageningen and Tufts University’s Fletcher School of Law & Diplomacy in the US city of Medford, Massachusetts.   Both delivered material highlighting the potential for soil carbon as an income-generator for poor farmers, and several delegats asked Verburg to arrange a meeting to explore the issue further.

“At that meeting, we saw a fundamental shift in the approach and thinking about agriculture,” says Hoogeveen.   “Before CSD-17, the feeling towards agriculture was that it was part of the problem, but after CSD-17, people began to see it as part of the solution as well.”

Several delegates to CSD-17 asked Verburg to organize a meeting that could help put soil carbon on the map ahead of year-end climate talks in Cancun, and the International Conference on Agriculture, Food Security, and Climate Change (also called “Down 2 Earth”) is the result.

Planned for up to 400 delegates, it quickly swelled to more than 700.

As the high-level meeting took shape, Hoogeveen got the idea for the investment fair to run alongside it.

“I realized that we needed buy-in from the private sector,” he says.   “I also knew that (Forest Trends President and CEO) Michael Jenkins had organized meetings like this in the past, so I called him.”

They decided to cover travel for 30 project developers if they could prove that their projects were viable and met a long list of criteria.   They posted the criteria on line, and Jenkins started a word-of-mouth campaign via the Katoomba Group, which is an affiliated network of NGOs and individuals focusing on payments for ecosystem services.

Jenkins pulled together a panel of experts from NGOs, the private sector, and government, and they whittled the list down to 30.   With just two weeks to go before the fair, Hoogeveen and his team arranged transportation and visas for the projects that made the cut.

Steve Zwick is Managing Editor of Ecosystem Marketplace.Ã‚Â  He can be reached at SZwick@ecosystemmarketplace.com.
Please see our Reprint Guidelines for details on republishing our articles.