Forest communities can theoretically benefit from carbon finance, but existing standards cost a fortune to implement. This week, Mexico aims to rectify that with a new Carbon Norm designed to create standardized forest-based carbon offsets for projects that plant trees and manage forests. Here’s a look at what the NMX aims to achieve – and the challenges it faces. 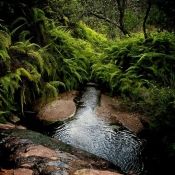 10 August 2015 | The Mexican Carbon Norm, set to come into force on August 14th, aims to bring most of the country’s land-based carbon projects under one umbrella – though it leaves avoided deforestation projects out in the rain. The Norm, known as NMX, will be implemented step-by-step: first through a national carbon accounting system, then by taking stock of all existing land-based projects and creating an independent regulatory body to oversee them.

“The purpose is to generate a national procedure, a certification, that provides access to uniformed validated credits in a voluntary market,” says Jaime Severino of the Carbon Projects and Markets program within CONAFOR, Mexico’s National Forest Commission.

Mexico is already a mosaic of struggling conservation efforts – some designed with carbon finance in mind, and others simply aimed at conserving nature. The NMX aims to include those struggling conservation efforts by creating a sort of “forest carbon lite” that say provides a way of attracting funding, but that critics say lacks the kind of environmental rigor that companies and environmental groups demand.

Central to the NMX is RENE, the national registry of emissions, which will register all domestic carbon projects and all emitting companies with emissions above 25,000 tonnes of carbon dioxide equivalent (tCO2e). By October of this year, RENE is supposed to include all emissions data through the last quarter of 2014.

The registry will validate Mexican projects already certified under voluntary standards, including the Gold Standard, the Verified Carbon Standard, and Plan Vivo. Forest carbon projects in Mexico have sold at least one million offsets over the years to voluntary buyers, for a total value of $9.6 million, according to Ecosystem Marketplace, which has tracked 12 active carbon projects in Mexico through an annual global market survey.

But some prospective project developers are frustrated by the high transaction costs within the carbon market, especially when demand remains uncertain. While demand for forest carbon offsets grew 17% in 2014 over 2013, average offset prices dropped by more than $2 per tonne globally, with tree-planting and forest management projects reporting values that fell at the very low end of what is needed to sustain project activities, according to Ecosystem Marketplace’ State of the Forest Carbon Markets 2014 report.

“People are sick of listening ‘your forest has value’ when they do not have money to support their family on daily basis with their intact forests,” says Eduardo Martínez from Investigación y Soluciones Sociambientales A.C.

Mexico was the first developing country to submit its climate pla to the United Nations Framework Convention on Climate Change, and it was also the first county to set both a conditional and unconditional goal. The country committed to cut its emissions 25% under the “business as usual” scenario by 2030 without help, or increase the cut to 40% if it receives technical and financial support within the context of the international climate agreement.

“In order to achieve rapid and cost efficient mitigation, robust global market-based mechanism will be essential,” the climate plan states.

Several Mexican states, including Chiapas, Oaxaca, Jalisco, and the tri-state area of the Yucatan peninsula, are in the process of working on REDD readiness – setting the stage to potentially receive international payments for avoided deforestation. Along with Acre, Brazil, Chiapas signed a memorandum of understanding with the US state of California’s cap-and-trade program, though regulators have not yet set a timeframe for deciding on whether to allow international offsets within the compliance program.

However, REDD is explicitly excluded from the NMX, which instead focuses on reforestation, forest regeneration, forest sustainable management, conservation, and agroforestry at the project level – leaving REDD under different, jurisdiction-scale processes.

“The way to reduce degradation and deforestation is through a mix of policies that allow a coordinated action with a broad vision, in a broad territorial level, not a project level,” says Severino.

“I think the mix of initiatives launched through the Mexican Norm is interesting, and that those projects that can’t be accommodated in the Norm, will be included in REDD+,” says Elsa Esquivel-Bazán, who is a project coordinator for AMBIO, a non-profit organization based in Chiapas.

The NMX was developed through a three-year stakeholder consultation process that involved NGOs, universities, the National Ecology and Climate Change Institute, and the Federal Office for Environmental Protection.

During the consultation process, several organizations argued that communities should have the opportunity to work with voluntary markets. NMX therefore maintains the possibility that a project could be certified by CONAFOR without receiving carbon offsets through the Norm – NMX would simply help to quantify those reductions at a national level and avoid double-counting, but the project could continue selling into the voluntary market.

While the goal of NMX is to streamline and reduce the costs of certification under a national standard and create demand among domestic buyers, experts remain hazy on the details.

“Because there’s no clarity regarding the regulations between the voluntary markets and the new markets that CONAFOR aims to build, there is no incentive for projects at the local level to certify under this Norm if they are able to certify under other voluntary markets standards whose rules are clearer,” says Martínez. The problem, he says, is that by aiming to be inclusive, the NMX may end up being irrelevant.

Another potential complication is land rights. While NMX applies to forest owners under any property regime – whether it be ejido ownership, community ownership, private land, or federal property – the Norm specifies that the property must be legitimized according to the civil code of each state. In many cases, the only way to prove ownership is with notarial deeds, and sources estimate that roughly one-third of landowners in some states don’t have the resources needed to obtain these documents, although we have not validated that figure.

Severino explains that the proof of ownership is crucial since the application of the Norm will result in marketable goods (carbon offsets), and it must be clear who the beneficiary is. The procedures for determining land rights under NMX are not unique to the Norm but used in several procedures at the federal level, he says.

According to CONAFOR, some of the challenges NMX faces are: raising enough interest among landowners and project developers; creating a critical mass of certified carbon offset to create a forest carbon market; and building domestic capacity for project development while still keeping certification costs low.

This first year will be crucial for developing the infrastructure for NMX and making sure benefits are distributed. NMX seeks to complement other projects that are already underway, such as the Mexican Carbon MéxicoCO2 platform, which was launched last November, and operates within the structure of the Mexican Stock Exchange (BMV).

One thought on “Mexico Aims For Inclusivity With New Carbon Norm, But Does It Bring Rigor?”