The Yawanawa, an indigenous people living in the Brazilian Amazon, are on a journey toward sustainability and a way of life that economically supports them while maintaining their traditions and keeping the forest intact. Here, Tashka, chief of the Yawanawa, describes efforts to develop a Life Plan to carve out this sustainable existence – and why such efforts are critical not just for indigenous folks but the entire world. 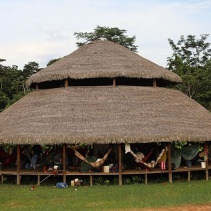 This story was adapted to an English version of Tashka Yawanawa’s statement. Read the original here.

27 April 2017 We are the Yawanawa indigenous people, a tribe of approximately 1,250 living in the Brazilian Amazon in the state of Acre. The majority of our population is young people and children. At one time, our population was numerous but many of our elders died, a sad consequence of colonization.

We live in a territory that’s roughly 200,000 hectares with 95% of its biodiversity intact.

A Brief History to Today

The 1800s marks a time of genocide and slavery for our people. It was then, when we were living under the leadership of Antonio Luis Pekuti, we made contact with Western society. We worked as slaves for rubber bosses who claimed to own our territory. Not only were we not paid for the work, but we had to deal with terrible atrocities on our own land.

During a “second contact” period, North American missionaries such as New Tribes Mission of Brazil came to “evangelize” our community, which resulted in the loss of many of our rituals, dances, artistic expressions and cultural and spiritual manifestations. Our traditions gave way to the Western culture the missionaries and the “seringalista,” a rubber plantation owner, brought.

Today, we celebrate our traditional customs, language and festivals that were almost lost. Our territory may be deep in the jungle far from cities and urban centers, but we’re actively engaged with NGOs, governments and the private sector to both maintain and improve life in the forest. We partner with organizations at local, national and international levels, which has enabled our people to restructure our communities so our culture and spirituality is strengthened.

Politically, two groups represent the Yawanawa people of the of the Rio Gregório Indigenous Territory. There’s the Yawanawa Cooperative, which represents the village of Nova Esperanca. The Yawanawa Sociocultural Association (ASCY) encompasses the remaining communities.

The Yawanawa Life Plan is a product of several critical partnerships. We have been working with cosmetics company AVEDA for 25 years. The corporation’s partnership with ASCY enabled us to strengthen our language and spiritual expression. The Life Plan also allowed us to establish sustainable livelihoods that harken back to ancient times.

Forest Trends, another key partner, has supported our Life Plan and worked with us on agroforestry activities and women’s handicrafts enterprises. The US-based NGO published Yawanawa Children’s Tales aiding us in our quest to keep out culture alive.

Brazilian-based CASA Socio-Environmental Fund and NativeEnergy, a carbon offsets provider, are among our other partners. 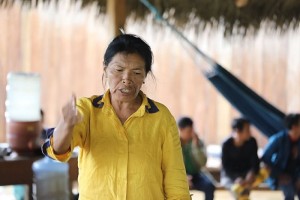 Many of our villages lie along the Gregório River: Matrixã, Amparo, Yawarani, Seven Stars, Tiburcio, Escondido and Mutum. Part of the idea behind the Life Plan was to explore this land and strengthen the activities that indigenous people are already developing. The Yawanawa people practice good land stewardship and have been since ancient times. The Life Plan helped us turn our practices into a strategy of sustainable livelihoods where we could flourish alongside the forest.

We met with thought leaders and our partners to discuss our Life Plan and what it should encompass. Eventually, these talks led ASCY to initiate a workshop on payments for ecosystem services in 2011. Leaders from six villages came to the workshop initially: Mutum, Escondido, Tiburcio, Seven Stars, Yawarani and Matrixã. Since then, we’ve held several consultative workshops among other planning activities. Over time, more villages joined and became part of the Yawanawa Life Plan.

In August 2015, we created the Yawanawa Leadership Council, a leadership organization that consists of two people from each village totaling fourteen people. We think it’s important that Yawanawa people – both men and women – participate in the decision-making process for projects that impact our future. 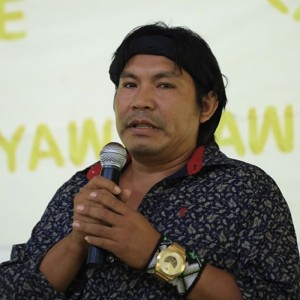 Our current focus is the Yawanawa Fund, which serves as the primary funding source for Life Plan activities. This fund is modeled after community funds operating in other Latin American countries and Africa.

The Yawanawa Life Plan is not a carbon offset or REDD (Reducing Emissions from Deforestation and forest Degradation) project. Rather, its objective is to implement activities that strengthen our cultural identity, preserve our traditions and build a sustainable economy – all without destroying the environment. Ultimately, this works preserves the trees, water and clean air among other ecosystem services the forest provides, which not only benefits us but the whole world.

Unfortunately, “santo de casa não faz milagre.” The government of Acre is not an implementing partner and its refusal to participate brought the project to a halt in 2015. The government would not agree to a partnership where it along with the Yawanawa benefitted from the sale of carbon credits.

It’s a missed opportunity as our pilot project could be the start of something – several communities may follow along the same path as the Yawanawa. It’s also an opportunity for Acre to see its System of Incentives for Environmental Services (Sistema de Incentivos a Serviços Ambientais  / “SISA”) in action.

However, the dream of autonomy, spanning back to the 1980s, is not dead. We continue forward. We continue to work with our partners: AVEDA, Forest Trends, CASA, NativeEnergy and others. Together, we work toward the implementation of the Yawanawa Life Plan, an innovative mechanism, that will one day come into being. As the song goes, “Quem sabe faz a hora… Não espera acontecer.”

We strongly believe that indigenous life plans as well as plans to manage indigenous land and territories are critical tools for us. They offer guidance on protecting our lands but also enjoying them without destroying the biodiversity and ecosystem services – something our ancestors did for centuries.