Skip to content
This article was originally posted in the Forest Carbon newsletter. Click here to read the original

The Peoples’ Climate March brought 400,000 people into the streets of New York City on September 21, calling for (among other climate-related demands) an end to tropical deforestation and protection for forest communities. More than 150 partners responded with the heavily funded NY Declaration on Forests, which aims to end deforestation by 2030 and restore 350 million hectares of forests and croplands. 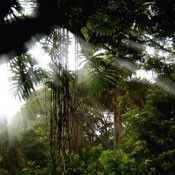 2 October 2014 The People’s Climate March clogged the streets of Manhattan on September 21 as 400,000 people gathered to call for ambitious action at the United Nations (UN) Climate Summit the following Tuesday. The march in New York City was echoed by more than 2,000 other rallies in 162 cities around the world, from Paris to Melbourne to Rio de Janeiro. It was the largest civil demonstration about climate change in history, and the more than 120 heads of state that attended the Summit took notice.

As UN Secretary General Ban Ki-moon’s summary illustrates, many commitments came out of the Summit, but among the most ambitious in terms of emissions reductions was the New York Declaration on Forests through which government, business, civil society, and indigenous leaders pledged $1 billion to end deforestation by 2030. If successful, the pledge would prevent the emission of between 4.5 billion and 8.8 billion tonnes of carbon dioxide annually.

“I asked for countries and companies to bring bold pledges, and here they are,” said Ki-moon. “The New York Declaration aims to reduce more climate pollution each year than the United States emits annually, and it doesn’t stop there. Forests are not only a critical part of the climate solution the actions agreed today will reduce poverty, enhance food security, improve the rule of law, secure the rights of indigenous peoples and benefit communities around the world.”

More than 150 partners, including 38 national governments, eight subnational governments, 35 companies, 16 indigenous peoples groups, and 45 civil society groups supported the Declaration. It includes an interim goal of halving deforestation by 2020 and also called for restoring 350 million hectares of forests and croplands an area greater than the size of India.

Norway alone pledged $300 million to Peru and $150 million to Liberia to support forest preservation efforts. The United Kingdom pledged £144 million ($235 million) to forests, which will be split between an existing program to close the European Union market to illegally harvested timber and jump start a new program to form public-private partnerships to support no-deforestation agriculture.

The United States, Canada and the European Union were all signatories to the pledge, but Brazil’s endorsement was conspicuously absent. Brazilian Environment Minister Izabella Teixeira said the country was not included in the preparation process for the Declaration and pointed out the futility of having a global forest initiative without Brazil.

If you have comments or would like to submit news stories, write to us at general@forestcarbonportal.com.

Ecosystem Marketplace is a project of Forest Trends, a tax-exempt corporation under Section 501(c)3. This newsletter and other dimensions of our voluntary carbon markets program are funded by a series of international development agencies, philanthropic foundations, and private sector organizations. For more information on donating to Ecosystem Marketplace, please contact info@ecosystemmarketplace.com.