The Lima Climate Talks wrapped up early Sunday morning with a bare-bones agreement on what constitutes a valid Intended Nationally-Determined Contribution (INDC) and a roadmap to year-end talks in 2015 that will begin with bottom-up proposals from countries and hopefully end with a convergence in Paris. With so little detail on INDCs, countries will have to step up individually by March. 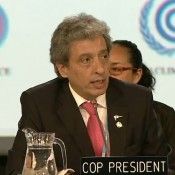 14 December 2014 | LIMA | Peru | French Foreign Minister Laurent Fabius summed up the outcome of the 20th Conference of the Parties (COP 20) to the United Nations Framework Convention on Climate Change (UNFCCC) as well as anyone.

“We have achieved in Lima a very good and useful agreement, which sets the basis for an agreement in Paris,” he said. “Manuel [Pulgar-Vidal] has been both very efficient and very diplomatic, because on the one hand he has been successful in achieving great agreement.”

But he had a caveat;

“On the other hand, he has left some work to do for Paris.”

The “Lima Call for Climate Action” contains both a 22-paragaph agreement on Intended Nationally-Determined Contributions (INDC), which are the emission-reduction proposals that individual countries will begin proposing in the first quarter of 2015, and a draft negotiating text for the 2015 agreement.

Gone is the laundry list of specific components that comprise a valid INDC, but the Lima agreement does enshrine a procedure for countries to offer their INDCs early and synchronize them over the course of the year.

“The information for the INDCs is key,” said Pulgar-Vidal, the Peruvian Minister of Environment who served as President of COP 20. “The INDCs are key to having this balance between the bottom-up and the top-down process for Paris, and also because the INDCs are going to show us if there is a gap, what is the dimension of the gap.”

The Paris draft negotiating text comprised the bulk of the agreement, and it contained many elements that had been contentious throughout Lima and remain unresolved. Included in the unresolved elements are the methods for accounting for land-use.

The 22 paragraphs on INDCs were less detailed than many had expected, and that will make the next three months especially critical as countries upload their INDCs to the UNFCCC web site. The proposals are supposed to contain specific emission-reduction targets and specific plans for achieving them, and optimists believe their emergence in place of a top-down global agreement will spark a race to the top throughout 2015 and even beyond.

“As contributions are put forward, peer pressure will grow for countries to be as transparent and ambitious as possible,” said Jennifer Morgan of the World Resources Institute (WRI).

“While the Lima summit fell short of expectations, the pressure is still on countries to put forward their best emissions reduction offers early next year,” said Alden Meyer, the director of strategy and policy for the Union of Concerned Scientists (UCS). “The good news is that the world’s three largest emitters China, Europe, and the U.S. have already committed to do so, and others are expected to join them.”

“There are deep and long-standing divisions on major issues including climate finance, which countries are more obligated to take action to reduce emissions, and whether to give greater priority to adaptation,” said Meyer. “These divisions nearly derailed the process in Lima; if they aren’t addressed, they threaten to block an agreement in Paris.”

A key stumbling block was the unwillingness of many countries, especially China, to submit to external scrutiny.

“To avoid the worst impacts of climate change, we need a strong, science-based agreement that sets the world on a path to virtually eliminating heat-trapping emissions before the end of this century,” said Meyer. “The resistance by some countries to allowing scrutiny of their proposals is troubling.”

The Lima decision included modest steps to increase ambition between now and 2020, including by providing technical support to developing countries to accelerate deployment of renewable energy technologies and other solutions to climate change. Unfortunately, there was no real progress on how to scale up financial resources towards the $100 billion per year by 2020 goal pledged by the U.S. and other developed countries five years ago in Copenhagen.

“Progress on the Green Climate Fund was a bright spot, with countries’ exceeding the $10 billion goal for 2014,” said WRI’s Morgan. “These funds will jump start a transition to a low-carbon and climate-resilient economy. It will be important to identify additional sources of funding that are on par with the scale of the climate challenge.”

Adaptation on the Ascendancy

UNFCCC Executive Secretary stressed the rise of adaptation onto the same level as mitigation, which will be done by providing more visibility to countries’ National Adaptation Plans (NAPs) and the Green Climate Fund. Pulgar-Vidal also launched a NAP Global Network involving Peru, the US, Germany, the Philippines, Togo, the UK, Jamaica, and Japan.

The Lima Information Hub for REDD+

Countries meeting in Lima made progress on providing support to avoid deforestation.Colombia, Guyana, Indonesia, Malaysia and Mexico formally submitted information and data on the status of their greenhouse gas emission reductions in the forest sector to the UNFCCC secretariat following a similar submission by Brazil earlier in the year.

These baselines are likely to increase the possibility of obtaining international funding under initiatives like Reduced Emissions from Deforestations and Forest Degradation (REED+).

In support of this, the COP President announced that an ‘information hub’ will be launched on the UNFCCC web site, spotlighting actions by countries carrying out REDD+ activities.

The aim is to bring greater transparency on both the actions being undertaken, including safeguards for communities and the payments being made.