Ecosystem Marketplace is wrapping up data collection for its State of Biodiversity Markets report with a final flash poll offering anyone who’s interested a chance to weigh in on the future of biodiversity offsets. In other news, carbon market practitioners eye wetland restoration and rewilding initiatives in Europe get a loan. 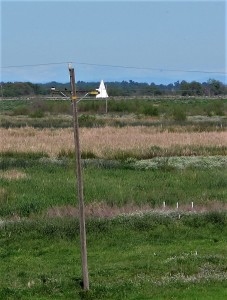 This article has been adapted from our monthly Mitigation Mail newsletter. Interested in wetland and species conservation and biodiversity markets?  Subscribe to receive the Mitigation Mail in your inbox.

11 May 2017 | Late last month, in a move that holds implications for wetland restoration in the US, the American Carbon Registry approved a carbon methodology enabling landowners in California’s Sacramento-San Joaquin Delta to tap carbon markets and earn money by “rewetting” parts of their land.

The mechanism could drive restoration of California’s inland marshes that store massive amounts of carbon, provide drinking water to the state and a livelihood to farmers. Government agencies and NGOs have expressed interest, though the methodology is very new and it remains to be seen if leveraging carbon finance to build wetlands can be successful at scale.

In other news, scores of players from the ecological restoration industry are convening at this year’s National Mitigation and Ecosystem Banking Conference, which is currently underway in Sacramento until May 12. Eric Holst of the Environmental Defense Fund and Westervelt’s Travis Hemmen figured it was a good time to remind us of the many ecological and economical benefits of restoration, which includes healthy jobs, communities and biodiversity. Holst and Hemmen also note, however, that the industry requires certain enabling conditions such as consistent standards, strong policy, and well-funded regulators in order to function at its best.

We also have coverage of a new mitigation pilot in California for highway projects that impact wildlife and a look at Wisconsin’s growing mitigation industry. Europe’s Natural Capital Financing Facility backed its first loan agreement, and a mining operation’s use of biodiversity offsets is causing a stir in Madagascar.

Finally, we’re still collecting data for the upcoming State of Biodiversity Markets report – but only for a short time. Please get in touch if you’re a project developer, offset buyer, broker, or retailer in the biodiversity offsets/compensation space or submit data here.

If you are none of these things but have thoughts on key trends driving demand or policy for offsets/compensation, we still want to hear from you!

Take three minutes to fill out our flash poll on market outlook, and help shape our new report.

Those aforementioned project developers, buyers, and brokers/retailers are welcome to weigh in too.

As the ecological restoration industry convenes for its flagship meeting this week, two restoration players highlight the sector’s role as a big economic driver. They also stress the need for consistent standards and strong policy in order to craft truly efficient and effective projects that benefit biodiversity and people.

Can California Tap Carbon Markets To Save Its Delta (And Its Drinking Water)?

The inland marshes that provide half of California’s drinking water and support its massive agriculture sector are sinking into the ground and drowning in fertilizer running off from farms. They’re also emitting massive amounts of carbon dioxide, contributing to climate change. Here’s how that could be the key to their salvation.

Ecosystem Marketplace has the story.

Climate Negotiators Roll Up Their Sleeves in Bonn, With or Without the U.S.

President Donald Trump’s decision to either pull the United States out of the Paris Agreement or remain in it are looming over global climate talks underway in Bonn. Both outcomes involve significant risks, say Forest Trends’ Gustavo Silva-Chávez and Brian Schaap. They explore these risks in a new blog post that lays out a conference to-do list, which negotiators will press forward on with or without the US.

Message From Tashka Yawanawa On Importance of Indigenous Life Plans

The Yawanawa, an indigenous people living in the Brazilian Amazon, are on a journey toward sustainability and a way of life that economically supports them while maintaining their traditions and keeping the forest intact. Here, Tashka, chief of the Yawanawa, describes efforts to develop a Life Plan to carve out this sustainable existence – and why such efforts are critical not just for indigenous folks but the entire world.

The Forest Stewardship Council recently published a draft version of its new procedure for demonstrating ecosystem services benefits from forest stewardship for public comment. The new FSC tools aim to give landowners access to new opportunities in ecosystem markets and the impact investment space. The consultation is open until May 21st – so go weigh in!

Participate in the public consultation.

The demand for wetland mitigation credits in Wisconsin is on the rise along with new development. Many banks are sold out and the state Legislature has mandated that the DNR establish an in-lieu fee program. However, ecologists are warning against too much mitigation, noting recent research that found restored wetlands offer half the biodiversity of natural ones.

Researchers continue to question the effectiveness of a biodiversity offsetting program that’s meant to help mitigate the adverse environmental impacts of a mining operation in Madagascar. This skepticism was exacerbated when a local farmer wasn’t permitted to speak about his concerns in the United Kingdom.

The Guardian has the story.

For Natural Capital, Don’t Let Perfect be the Enemy of Good

In a recent article, Alka Upadhyay of Tata Sustainability Group, a consultancy for business, encourages companies to experiment with existing natural capital protocols rather than wait for a perfect valuation tool. Several Tata companies have applied the Natural Capital Protocol on their operations with encouraging results, Upadhyay says.

Read the whole article at Greenbiz.

Rewilding Europe Capital is the first conservation enterprise to receive funding through the Natural Capital Financing Facility, which is a financing partnership between the European Commission and European Investment Bank. Perhaps unsurprisingly, Rewilding Europe Capital will use the US $6.5 million loan to support rewilding initiatives across Europe.

Earlier this month, US lawmakers approved a spending package that preserved funding for some key conservation programs. Among the fully funded: the Great Lakes Restoration Initiative and the Land and Water Conservation Fund. The North American Wetlands Conservation Act program actually received a $3 million increase.

Even though the US Fish and Wildlife Service determined the greater sage-grouse didn’t warrant a listing under the Endangered Species Act in 2015, the grouse remains a chief concern for western developers. Oregon, for instance, requires entities follow the mitigation hierarchy to direct development away from the highest quality habitat.

The Army Corps of Engineers once again denied a Florida developer permission to craft a mitigation bank in Manatee County. Officials say Carlos Beruff failed to address the agency’s concern – which many in the community voiced as well – that the bank would cause adverse effects to the environment.

Keep reading at The Bradenton Times.

Mitigation Unfavorable to Some Colorado Locals

While bridge developers in Colorado are following Army Corps of Engineers orders to mitigate their impact on wetlands, some locals aren’t happy about the construction and maintenance work going on at a nearby site. They say the bridge projects don’t disturb the existing wetlands all that much and are concerned that additional wetlands could mean more mosquitos.

The Payments for Ecosystem Services Advantage

Dave Zehnder is a British Columbia rancher interested in payments for ecosystem services. Over several years, he mobilized significant interest in the concept helping to launch the research and development project, Farmland Advantage, with the ultimate goal of establishing a province-wide long-term PES program.