The LEAF Coalition says it’s hit its goal of matching $1 billion in performance-based commitments with countries that aim to reduce deforestation. The first countries to sign letters of intent are Costa Rica, Ecuador, Ghana, Nepal, and Vietnam. 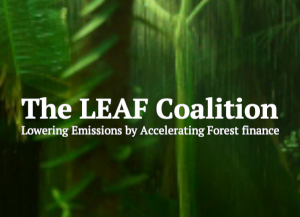 GLASGOW | 2 November 2021 | The LEAF Coalition (Lowering Emissions by Accelerating Forest Finance) says it has achieved its goal of mobilizing $1 billion for countries and states looking to reduce greenhouse gas emissions associated with deforestation and degradation of forests (REDD+).

The achievement was announced today at the World Leaders Summit, which is the opening segment of the 26th Conference of the Parties (COP 26) to the United Nations Framework Convention on Climate Change (UNFCCC).

LEAF is a voluntary global coalition bringing together the private sector and governments to provide finance for tropical and subtropical forest conservation commensurate with the scale of the climate change challenge. Reversing deforestation is essential to achieve the goals of the Paris Agreement and for any pathway to a 1.5-degree future.

Costa Rica, Ecuador, Ghana, Nepal, and Vietnam will sign the first Letters of Intent with Emergent, which is acting as the intermediary for the Coalition.

“The UK is proud to be part of this ambitious coalition that is massively scaling up the amount of finance available to support efforts to stop deforestation, cut global greenhouse gas emissions and put nature on the path to recovery,” said UK Prime Minister Boris Johnson.

Reductions are measured and verified to an independent third-party standard called The REDD+ Environmental Excellency Standard (TREES), developed by the Architecture for REDD+ Transactions (ART). Forest protection programs that operate across entire states matter not only for achieving results at scale, but also because acting at the jurisdictional level supports critical public policies to address deforestation.

As required by TREES, before funding is provided, independent third-party validators will ensure total deforestation across a jurisdiction has been reduced, that efforts to reduce deforestation have not negatively impacted local communities, and that plans are in place to equitably share benefits with local communities.

For more details on LEAF:

Stephen Donofrio is Director of Ecosystem Marketplace and Supply Change initiatives of Forest Trends. He is also the Founding Principal of GreenPoint Innovations and previously led programs at CDP North America and the Chicago Climate Exchange.