As the world reaches for solutions to meet globally-agreed targets for climate, biodiversity, and land degradation, the LEAF Coalition has received more than 30 proposals by sub-national governments that together encompass over half a billion hectares of forest. 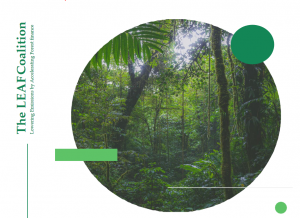 28 September 2021 | Protecting and restoring tropical forests is one of the most powerful tools to slow and ultimately halt climate change. They store up to a quarter of all the above ground carbon and represent 50 percent of the world’s terrestrial biodiversity. Unfortunately, the world is losing forests at an alarming rate.

The international community has long recognized that action to protect forests is a central part of action to combat climate change. In fact, more than a decade ago, the international negotiations were kicking off on the rules for how countries should work together to reduce emissions from deforestation, promote conservation and sustainable management of forests, and enhance forest carbon stocks in tropical forest countries – actions collectively known as REDD+.

The results of these negotiations were enshrined in the Paris Agreement, where under Article 5, industrialized countries are encouraged to make results-based payments to developing countries for emissions reductions achieved at the jurisdictional level.

But, that was just the first step. To date, donor governments together with multilateral institutions, such as the World Bank and the UN Green Climate Fund, have committed more than $7 billion under the REDD+ framework. But much more finance is needed if the world is to meet its globally-agreed targets for climate, biodiversity, and land degradation, estimated to be $4.1 trillion financing gap for nature by 2050. Even funding support amounting to hundreds of millions of dollars is not always sufficient to give forest countries the confidence to embark on ambitious forest protection and emission reduction programs, which require significant investment of financial and political capital.

Simply put, the vast potential for climate action from REDD+ will not materialize in the absence of massively increased levels of visible demand. On the other hand, many potential providers of results-based finance are unwilling to make large-scale funding commitments in the absence of visible supply. In the REDD+ community, we called this the “chicken or egg” problem.

As someone who has been working in impact investing and climate finance while the REDD+ negotiations were unfolding, it was clear that forests needed a new business plan, and that a new strategy had to be adopted to solve this chicken-egg challenge. Ultimately, this mission led to the formation of Emergent in 2019. Our goal was to create a non-profit intermediary that could engage between tropical forest countries and the private sector to mobilize finance to support emissions reductions in deforestation. In its most distilled form, the theory of change was simple: if we can rally a big enough demand signal, the supply of large-scale forest protection solutions would materialize.

The LEAF Coalition Receives Overwhelming Response to Its Call for Proposals

It was this same vision that drove the launch of the LEAF Coalition earlier in the year. Coordinated by Emergent, LEAF is on track to become the largest ever public-private initiative designed to accelerate climate action by providing large-scale results-based finance to countries committed to protecting their tropical forests. Backed by the integrity of ART’s leading TREES standard, the aim is to unlock ambition in tropical forest countries to halt deforestation by sending an unprecedented demand signal. The Coalition is growing and just last week Delta Air Lines and PwC became the latest private sector participants to join.

When we launched the initiative, we didn’t know exactly what response to expect from the Coalition’s call for proposals (CFP). Based on previous work and outreach, we knew there would be significant interest from tropical forest countries, but we couldn’t have put a specific number on it.

Well, if there was ever any question if the interest (and supply) is out there, the response to LEAF’s CFP answered it, and answered it definitively.

LEAF received more than 30 proposals from jurisdictions that together encompass over half a billion hectares of forest. Proposals were received from jurisdictions on four continents representing the world’s three great tropical forest regions: the Amazon basin, the Congo basin and the forests of South-East Asia. Jurisdictions’ estimated self-reported volumes totaling more than 1 billion tonnes of Emissions Reductions over a five-year period.

For those of us who have worked in this space for a long time, there was a definite feeling that an important milestone in the REDD+ journey was reached with this response; a significant step forward toward the goal of the Green Gigaton Challenge. It showed the tremendous resolve and political willingness from forest countries to protect their forests. Now it is time for the demand to respond and to step up at even greater scales.

In the period ahead, Emergent will be working closely with participants of the LEAF Coalition to carefully review the proposals to identify those able to meet Call for Proposals’ rigorous selection criteria and ambitious timelines. Discussions with jurisdictions are taking place over the next few months, with the aim of announcing the first set of agreements by the end of this year.

But LEAF’s $1 billion target is just a start. These proposals have unlocked an enormous opportunity for the world to come together and support an end to tropical deforestation. Emergent’s mission and ambition is to mobilize enough finance to unlock all of the potential represented by these proposals and beyond. We have entered a new phase in the global REDD+ effort, and I for one am excited for what’s next.