Twenty percent of the forests and farmland of Latin America and the Caribbean have been degraded by over logging, overgrazing, and overplowing, according to the World Resources Institute, which says that restoring just 20 million hectares can generate $23 billion in net benefits over the next 50 years and slow climate change. 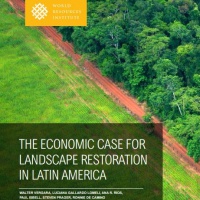 4 November 2016 | Launched at the 2014 Lima climate talks and propelled at last year’s talks in Paris, Initiative 20×20 is an effort to set 20 million hectares of degraded land in Latin America and the Caribbean on the path to restoration by the year 2020. Critically, it’s a “country-led” (as opposed to “donor-dictated”) initiative, which means it’s designed to break the old habit of donors micromanaging the aid process and instead give recipient countries more control over efforts launched there. The rise of such efforts has led to a rise in research targeted to regional policymakers, and a new paper called The Economic Case for Landscape Restoration in Latin America is one such effort.

Published by the World Resources Institute (WRI) on the eve of this year’s year-end talks in Marrakesh, the paper is intended for Latin American and Caribbean policymaker and argues that governments can increase the profitability of agriculture by promoting more sustainable land-use practices, such as no-till farming and agroforestry, which lock carbon in the land and increase yields of staple foods and non-timber forest products like acai berries and Brazil nuts. Such a shift, they argue, will increase income from farming, carbon sequestration, and ecotourism while lowering agricultural insurance costs.

So far, 11 countries and three Brazilian states have signed on to Initiative 20×20, and the analysis argues that farmers in those countries can generate $23 billion net value over the next 50 years by sticking to the 20×20 targets. That, they point out, is roughly 10% of the value of the annual food exports from the region – and 20 million hectares is less than 1/30th of the more than 650 million hectares Latin American and Caribbean land classified as degraded or underperforming.

“The report offers an important reminder that the future of conservation is really integrated landscape management where we can effectively recognize and manage holistically a mix of protected natural ecosystems, mixed-used landscapes, and agricultural systems, maximizing the overall environmental and economic benefits these systems provide together for local communities and society at large, says Gena Gammie, who co-manages the water initiative of Ecosystem Marketplace publisher Forest Trends and has worked extensively in Latin America.

“Our task now is to develop the institutions that will allow us to turn good economics into good finance, allowing us to get these ideas from reports to practice on the ground,” she adds.