The Forest Trends Supply Change initiative has identified more than 100 companies that plan to include smallholder farmers in their sustainability efforts, but such inclusion is easier to conceive than to achieve. Here’s how Danone, Mars, and a handful of other companies are teaming up with regional NGOs to deliver on that promise. 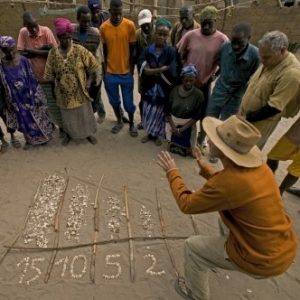 13 March 2017 | By all accounts, the Kenya Agriculture Carbon Project (KACP) has been a stunning success.

Launched by environmental NGO VI Agroforestry in 2009, the KACP tapped carbon markets to help 30,000 farmers shift to Sustainable Agriculture Land Management (SALM), which is climate-safe farming that blends low-till methods with mulching and – above all – the planting of trees among crops to draw nitrogen and carbon from the air and infuse it into the soil.

The program improved soil fertility and piloted new methods of validating and verifying carbon removals under the Gold Standard, which is a science-based approach backed by 88 environmental NGOs.

In the end, it generated 150,000 carbon offsets that have been validated and verified by recognized third-party auditors, which enabled the World Bank to buy them for $5 each – providing an income stream that aligns VI Agroforestry’s fundraising with its mission, and creating a template for spreading climate-safe agriculture to hundreds of thousands of other farmers across Kenya.

By 2013, VI Agroforestry was ready to spread the program further, but there was a catch.

It was, she knew, quite possible for VI Agroforestry to do everything right – and to replicate its success with 30,000 new farmers – but to still find no buyers for the offsets. It was also possible for a deeper drought or flash floods to disrupt the carbon content of the soil, which would squeeze the funding just when it was needed most.

So, in 2013, just as the KACP was hitting its stride, she invited Bernard Giraud, CEO of Livelihoods Venture, to the KACP site.

Would he, she asked, be interested in financing the expansion?

The answer, it turns out, was forming in the Nairobi suburb of Ruiru, about 500 kilometers to the east, where a Kenyan executive named John Gethi was looking for milk, while his boss, Muhoho Kenyatta – the younger brother of President Uhuru Kenyatta and CEO of the Brookside Dairy Group.

In 2013, Brookside was gathering milk from more than 130,000 farmers. That number has since grown to 160,000, and Gethi, as the company’s Director of Procurement, is charged with keeping the trend going – or, more accurately, keeping the milk flowing in ever-higher amounts.

The son of farmers, Gethi knew that even a single cow is a major investment for people like Prisca Mayende and Ignatius Sifuna Nabutola – and one that can quickly turn sour if no one buys the milk. So, to “de-risk” the investment, Gethi instituted offtake agreements, which are guarantees to buy whatever milk farmers could deliver, provided it met quality criteria.

Then he noticed something truly astounding: in most territories, cows delivered an average of just three liters of milk per day – an amount that fluctuated wildly with the rains. But in areas where farmers had adopted agroforestry, the cows yielded 10 liters per day – and they did so consistently – because farmers were turning leaves into fodder, while trees were helping to replenish the watershed.

If he could combine agroforestry with uptake agreements, Gethi reasoned, farmers would both purchase more cows and deliver more milk per animal – a double-win that could geometrically increase Brookside’s milk supplies.

At the same time, French dairy group Danone, which had Launched the Livelihoods Fund, was looking to expand its operations across Africa, while the Kenyatta family was looking for investors to fund its expansion. So, in early 2014, just as VI Agroforestry was receiving its first carbon-offset payments from the World Bank, Danone took a 40% stake in Brookside – creating a conduit between Gethi, Giraud, and Mutua.

“Ninety-five percent of our raw milk comes from small farmers,” adds Gethi. “If we don’t make it worth their while to produce milk, the smallholder is going to forget about dairy and do something else.”

“We looked for ways that Livelihoods could finance Wangu’s project and expect a reasonable return with acceptable risk,” says Giraud. “We came up with what I think is a pretty novel solution.”

The Livelihoods Fund decided to invest in the Mount Elgon project, with its returns coming from three streams: two related to carbon, and one related to milk.

The first stream comes from the carbon captured in soil, and it uses the exact methods that VI Agroforestry piloted through the KACB. The second stream also follows a recognized Gold Standard methodology, but it reduces greenhouse-gas emissions by improving something called “methane efficiency” – which, to put it crudely, means reducing the ratio of methane emissions to cow farts.

Cows, as anyone who has ever stepped into a barn knows, are notoriously flatulent. That flatulence is methane – a greenhouse gas 23-times more harmful than carbon dioxide. If you can increase the amount of milk without increasing the amount of methane, the emissions per liter will decrease.

“Today, the average production per cow is three liters [per day],” says Giraud. “We want to raise this productivity up to nine and even more, depending on the breed and the feed. So we will increase massively the production, and at the same time reduce the ratio, and we will get 500,000 carbon offsets through this milk efficiency.”

Between the soil and the methane, he sees one million tons of offsets over the next ten years – which is good, but not necessarily enough to justify the risk.

That’s where the milk comes in.

That’s almost a thirtyfold increase, but it will only happen if VI Agroforestry has the manpower to send more people like Makanda Khisa out to recruit and train farmers. So, Brookside agreed to co-finance the expansion and share an undisclosed portion of the increased milk revenues with The Livelihoods Fund – providing the template for a second fund that works by forging tighter cooperation among farmers and food companies, and correcting what Giraud sees as a common defect in global supply chains.

Both Giraud and Danone CEO Emmanuel Faber talk of “broken supply chains” that leave producers disconnected from consumers, and Giraud noticeably winces at the word “commodities”, which he says only widens that disconnection.

“We’ve been buying raw materials, but ignoring where they come from,” says Giraud. “We don’t know the impact they’ve had on the environment and on the livelihoods of the farmers.

And that, he says, leaves the company vulnerable to existential disruptions in its supply chains.

“In many cases, stakeholders are in lose-lose situations,” he says. “Farmers are trapped in farming models and practices that generate low productivity, unacceptable poverty, and environmental degradation; while companies suffer from supply insecurity, irregular quality and reputational issues. Our goal is to co-develop a win-win model that will create more value for all stakeholders and turn vicious circles into more virtuous ones.”

A growing number of companies seem to share that goal: the Forest Trends Supply Change initiative, for example, identifies more than 100 companies that have pledged to work with smallholders in the soy, palm, cattle, and timber & pulp sectors to reduce their impact on forests.

Those are the “big four” commodities responsible for most deforestation, but thousands of other ingredients – like tea, cacao, and cardamom oil (a key component of perfume) – come mostly or exclusively from smallholder farms, and companies like Swiss “perfume and flavor” purveyor Firmenich are especially vulnerable.

Dominique Roques, the company’s director of sustainable acquisition, says Firmenich depends on 200,000 small suppliers for 180 exotic ingredients, and it increasingly sees a competitive advantage in treating those suppliers as partners rather than just people to bargain with.

“It’s easier to sit in the office and wait for a drum of cardamom oil to show up and discuss the prices,” he said, at during a panel discussion called “Shaping sustainable supply chains of the future” at the 2015 Global Landscapes Forum, on the fringes of the Paris Climate Talks – where Gethi, Mutua, and Giraud also spoke.

“But now we understand that we need to know who is growing it and what their revenues are,” he continued. “[We need to know if] they wish to keep planting and collecting it – or do we have problems?”

Barry Parkin, director of sustainability at family-owned Mars, participated in that panel, too, and he says his company faces a similar dilemma.

“We have about a million farmers that supply us,” he says. “Most of those are smallholder farmers, and many of them are struggling.”

Like Brookside, Mars had tried to offer certainty to its suppliers through offtake agreements, but it began to see that certain environmental NGOs – like VI Agroforestry in Africa and the Naandi foundation in India – were doing more to boost productivity than Mars ever could. Might there be a way of partnering?

The Livelihoods Fund for Family Farming

In early 2015, Danone and Mars launched the Livelihoods Fund for Family Farming (L3F) to compliment the Carbon Fund (LCF). Like its predecessor, the L3F partners with NGOs that have a proven track record of helping small farmers improve their land management. Unlike its predecessor, the L3F aims to earn its return primarily by sharing in the higher profits generated at corporate level. The “investors” provide both up-front finance and long-term offtake commitments, while the fund acts as a conduit for expertise and vehicle for risk-sharing among different projects.

“We get a secure supply of quality material coming into our supply chain, and we have smallholder farmers who have been transformed in terms of their livelihoods,” says Parkin. “We also have agriculture that’s being done in a way that’s within planetary boundaries, so basically, we get sustainable agriculture and a sustainable supply of materials through the fund, at a very efficient financial set-up.”

Giraud says the fund is about to announce three projects involved in cocoa and vanilla, and it’s looking into sugarcane, coconut, and rice projects – as well as some involving three of the big four deforestation commodities: namely, cattle/dairy, palm, and timber & pulp.

That’s a longer horizon than many investment funds take, but this one involves partnerships among types of organizations that don’t normally cooperate – including companies like Brookside, which have long-standing procurement procedures, and NGOs like VI Agroforestry, which have long-standing fundraising procedures, but also governments and other suppliers and sub-suppliers.

We amended the closing paragraphs of this piece because the original phrasing implied that the  Livelihoods Fund for Family Farming had no projects. They do, in fact, have three but have not yet made them public.