From 2010 through 2015, environmental NGO VI Agroforestry leveraged carbon finance to help 30,000 Kenyan farmers develop more sustainable practices. With millions of others still in poverty, however, the organization needed to scale up further, yet it was leery of taking on market risk to do so. Could a for-profit impact investment fund be the solution? 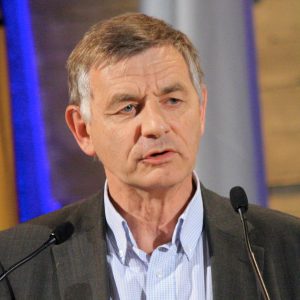 This is the fourth in a continuing series that begins here.

24 February 2017 | Bernard Giraud spent the late 1990s crisscrossing the United States for an organization called the Invest in France Agency, where he encouraged Americans to invest in French businesses. Today he’s crisscrossing the world for the Livelihoods Funds, where he’s encouraging large corporations to invest in smallholder farms across Africa, Asia, and Latin America.

If all goes according to plan, his investors, which include household names like Mars, Michelin, and SAP, will have funneled €160 million into activities designed to help more than 230,000 small farms in Africa, Asia, and Latin America increase their yields while planting 130 million trees and improving the lives of more than three million people.

What’s more, he believes, those investors will also make a profit.

“We are not a philanthropy,” he says. “We are an investment fund.”

And they’re not alone. Research by the Forest Trends Supply Change initiative shows more than 100 companies are engaging with smallholder farmers to slow deforestation, while research by Ecosystem Marketplace shows that impact investors put more than $8.2 billion into conservation projects from 2004 through 2015. Of that, $6.5 billion went to activities like sustainable farming and forestry, with the rest going into payments for ecosystem services.

The two Livelihoods Funds are also investing in both farming and ecosystem services, but unlike most food and forestry investors, they’re not buying farms. Instead, they’re financing NGOs that help small farmers succeed, in the hope of sharing in that success. If the effort works, everybody wins, and if it doesn’t, then the investors – and not the farmers – take the hit.

The Livelihoods Funds trace their genesis to 1998, when Giraud left the Invest in France Agency to become director of sustainability for Danone Group, the world’s largest yogurt maker. There, he spearheaded a partnership between the company and the United Nations Ramsar Convention on Wetlands – making Danone the first private company to formally partner with a global environmental convention.

A decade later, he brought the International Union for Conservation of Nature (IUCN) into the mix and launched the Danone Fund for Nature, which aimed to offset Danone’s greenhouse-gas emissions by restoring degraded mangroves – which are wooded coastal swamps, like Florida’s Everglades, that protect shorelines, shelter young fish, and absorb massive amounts of carbon dioxide.

Around the same time, environmental NGO VI Agroforestry – which we covered in the first and second installments of this series – began experimenting with carbon finance to see if it could help small farmers across Kenya improve their yields by strategically planting trees that nourish soil by pulling nitrogen from the air and infusing it into the ground, among other things.

“We first had conversations with VI more than five – maybe seven – years ago,” says Giraud, who also heads the Livelihoods Venture, which is a small group that advises the fund.

“I remember [VI Agroforestry] came to a Livelihoods camp in India,” he says. “We were brainstorming about these practices.”

By 2011, the brainstorming had yielded tangible results in the form of the world’s largest mangrove restoration project and VI Agroforestry’s massive expansion of agroforestry in Kenya.

It also yielded a growing network of NGOs with deep expertise in sustainable agriculture but little appetite for the risks inherent in carbon markets. That got Giraud to thinking.

“How can we, as a company, make finance available to support this effort at large scale?” he asked. “How can we structure finance so we can empower local organizations that have direct access to farmers to make those practices easy for farmers to implement?”

The answer, he says, was obvious:

“First, we need to invest up-front, because if we don’t take any risk, there is no way that small farmers can pre-invest by themselves,” he says. “Also, we need to support practices which are accessible and affordable for farmers – not necessarily the most complex technologies.”

He persuaded Danone to open the Fund for Nature to investors beyond themselves and to finance projects beyond mangroves. He also gave it a new name: the Livelihoods Carbon Fund, and spun it off as an independent entity.

The Livelihoods Carbon fund is designed to generate a modest return over time while also generating benefits for the common good.

“For a farmer, better management at farm level brings more water in the dry season, so: more milk [for dairy farmers]!” Giraud says. “But the impact of sustainable farming practices at the watershed level has an impact on the whole population living downstream, so the supply chain can be connected to private benefit for the business, private benefits for the farmers, but also public goods.”

The fund pooled €40 million from Danone and nine other investors (all listed here) and began looking for rural development programs that could generate carbon offsets – either by planting trees, switching to clean-burning cook stoves, or simply empowering farmers with more efficient practices. When it found one which delivered tangible and scalable results, it would offer to provide up-front financing in exchange for carbon credits down the road.

In Guatemala, for example, it is investing €2.4 million in tree nurseries, training, and monitoring for local NGO Fundaeco to plant four million commercial trees such as citrus, coffee, and cacao, as well as mahogany and cedar for sustainable timber. The fund hopes to make its money back by generating one million carbon credits for the carbon pulled from the atmosphere – credits that investors can either use to offset their own emissions or sell for a profit.

Shortly after that project launched in 2013, Wangu Mutua of VI Agroforestry invited Giraud to VI’s project in Bungoma.

“I was very impressed,” Giraud says. “They were able to replicate simple things at large scale.”

And, Mutua told him, they wanted to expand to 30,000 farmers across the Mount Elgon region.

Continue to the next installment: “The Art of the Conservation Deal“.