Washington state Governor Jay Inslee has built his entire campaign on climate change, and today he unveiled his “Evergreen Economy” proposal to redirect more than two dozen existing US programs towards the climate challenge. Details remain scarce, but here is what we know about how the plan impacts the country’s forests, farms, and fields. 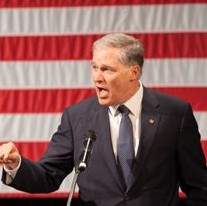 16 May 2019 | Sixty years ago, the US Congress created the Defense Advanced Research Projects Agency (DARPA) within the Department of Defense, and DARPA incubated the technologies that became supercomputers and the internet, among other things. Ten years ago, Tennessee Congressman Bart Gordon conceived the Advanced Research Projects Agency-Energy (ARPA-E) for the Department of Energy, and it funded research that led to more efficient energy transmission and longer-lasting batteries — two keys to spreading renewable energy across the country.

Now Democratic presidential candidate Jay Inslee is pitching something called “ARPA-Ag” to promote research into climate-smart agriculture under the Department of Agriculture as part of his $9 trillion Inslee compares his “Evergreen Economy” climate action plan.

Like the Green New Deal, Inslee’s proposal puts the bulk of its emphasis on new energy technologies and only makes passing reference to natural climate solutions, which research shows can deliver 37 percent of the mitigation needed to reach the Paris Agreement’s 2-degree target. The plan does call for massive investment in infrastructure, but it’s not clear to what extent emerging green infrastructure technologies that incorporate natural elements like rivers, trees, and flood plains, will be deployed.

Inslee has built his campaign on tackling climate change, and he’s promised to release more details in the weeks ahead. For now, here is what his plan says about agriculture:

“ARPA-Ag” & Agricultural Innovations to Tackle Climate Change: American agriculture has long been a world leader in innovating scaled efficiency in food production and there is an immediate need to preserve this global leadership. The treatment of our lands and soils will increasingly become central to restoring a carbon balance to the planet’s atmosphere because climate stabilization requires that all carbon emissions — both natural and human caused — are balanced by carbon storage, including through an increase in the fertility and productive capacity of both cultivated and wild lands. That places farming communities and agricultural workers at the epicenter, once again, of America’s economic promise. Under Governor Inslee’s R&D agenda, America’s farmers will do again what they have always done: provide feed, fuel, and fiber to a thriving global economy. Two key initiatives in an Inslee Administration will be central to this task: ARPA-Ag and the addition of innovation to the practice of Agricultural Extension Services. These policy initiatives, and others contained in the Evergreen Economy Plan, foreground Governor Inslee’s plan for economic development in America’s rural communities, and for sustainable and thriving American agriculture. Together, these efforts will promote sustainable economic development in rural America through research, development and deployment.