US President Donald Trump and House Speaker Nancy Pelosi seem to agree on one thing: namely, the sad state of US infrastructure. Yesterday, they agreed need to spend up to $2 trillion fixing it. This is an opportunity not just to build roads, but to create jobs and end climate change. 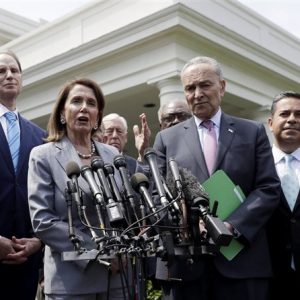 1 May 2019 | In the middle of last month, US Senator (and New Green Deal co-sponsor) Ed Markey (D-Mass) told Vox that his party would make sure that any overhaul of the country’s infrastructure was done with clean energy.

“If there is an infrastructure bill, we’re going to make it a green energy bill,” he said. “We’re going to be submitting amendments that ensure that bill has aggressive renewable energy resource and energy efficiency standards, and that there are higher and stronger standards for federal renewable energy procurement.”

But infrastructure goes beyond roads and bridges and into forests, farms, rivers, and streams – all of which help us manage storm runoff and meet our needs for clean drinking water. US cities like Denver and New York already funnel water fees into forests, farms, and fields, because that’s where their water comes from. The cities of Philadelphia and Washington, DC, meanwhile, are using stormwater fee assessments to encourage investment in green spaces that absorb water instead of concrete ones that repel it.

Green infrastructure is nothing new. In 2016, California legally recognized meadows and streams as part of its infrastructure. That same year, Ecosystem Marketplace documented nearly $25 billion for green infrastructure spread across 62 countries in 2015 alone (see Alliances for Green Infrastructure: State of Watershed Investment 2016).

Research published in 2017 showed that green infrastructure can be dramatically cheaper to maintain than gray infrastructure. That makes intuitive sense, because forests and fields are living things that grow, while pipes and sidewalks crumble and decay – although in practice, almost all green projects are a blend of green and grey.

Most of the projects that Ecosystem Marketplace identified in 2016 were small initiatives set up by cash-strapped governments, and they were usually financed by getting users or beneficiaries to pay for the ecosystem services, such as clean water or flood control. That’s what Denver, New York, DC, and other cities do, and the Peruvian government is taking the strategy to new heights. It’s in the midst of launching a massive program designed to funnel urban water fees from 38 water districts to farmers in the Andes.

No one has yet said where the $2 trillion will come from or how it will be spent. If it materializes, it will probably come from a combination of user fees and tax increases.

No matter where it comes from, it should be dispensed based on performance. Regional governments around the country have been experimenting with so-called “pay for success” models (see “Nature, Paid on Delivery: Is Pay for Success the Future of Ecological Restoration?“), while the 2016 Ecosystem Marketplace report documents scores of projects that use payments for performance.

Many of the projects documented there involve a government or business partnering directly with landholders near its water source – like a beverage company paying local farmers to reduce their pesticide use, saving money on on-site water treatment in the process – or paying into a local water fund.

The report found that the $24.7 billion spent in 2015 either protected, rehabilitated, or created new habitat on 486 million hectares of land – an area 1.5 times the size of India – while also delivering “beyond-water” benefits including biodiversity conservation, climate adaptation, and sustainable land management training for local communities. Direct subsidy payments to public and private landholders accounted for most – $23.7 billion – of this total, as governments sought to encourage sustainable agriculture and other practices that support healthy watershed function.

Another $675 million came from water users themselves – cities, companies, or water utilities acting on behalf of customers – in an effort to proactively safeguard water supplies close to home. Cities and states moved to mitigate risks to water supplies, but were also motivated by the environmental and social co-benefits these projects delivered. Meanwhile, water utilities surveyed by Ecosystem Marketplace cited concerns about operational and maintenance costs as their core motivations for watershed investment. For the private sector, it was reputational and supply chain risks that often motivated action, particularly in the food and beverage sector, which spent about $9 million in 2015. More broadly, the report highlights the growing popularity of corporate water stewardship, citing commitments by large, consumer-facing brands like Coca-Cola, SAB Miller, and IKEA.

The report also covered developments in other, more “market-like” mechanisms for watershed investment. Water quality trading and offsets programs jumped from $20.8 million in transactions in 2013 to nearly $32 million in 2015, hitting an all-time high. And environmental water markets, which connect buyers and sellers of water use rights seeking to restore water to overdrawn river systems and aquifers, saw the US surpass Australia for the first time as the worldwide leader in transactions ($48.4 million as of 2015). Environmental water markets are becoming more flexible and accessible to private investors, according to the report, making them a promising mechanism for conservation finance in the coming years.

These watershed investments are steadily gaining momentum, with transactions growing about 12 percent per year on average between 2013 and 2015, but the report notes that uncertainty around future regulations ranked as the top concern among project respondents.

NOTE: the last section of this piece is adapted from our 2016 story, “Close To $25 Billion Spent To Secure Green Infrastructure Worldwide In 2015.”