The new President of Indonesia, Joko Widodo, surprised some observers recently when he announced his Cabinet was combining the Ministries of Environment and Forestry into one ministry, to be led by Ms. Siti Nurbaya, a politician with ample experience with regional and central governments. 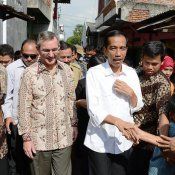 This article originally appeared in the November 7th edition of the Jakarta Post. It was also posted on the CIFOR (Center for International Forestry Research) blog.

21 November 2014 | The decision made by Indonesia’s President to merge the Ministries of Environment and Forestry sent ripples throughout the Indonesian environmental and policy community and could signal that a broad and cross-sectoral environmental agenda would be weakened and simplified. At the same time, it could strengthen jurisdiction over forested lands, which will be consolidated under one ministry. While President Joko Widodo repeatedly reminded Indonesians that we have been forgetting marine affairs, one can only hope that he does remember that there are numerous unresolved conflicts over land and land ownership in our back yard.
In any case, it was a bold move: The political ramifications of combining ministries can be unwieldy. Merging two distinct bureaucracies with their own strengths, weaknesses and different capacities is a challenge in any country, in any context. It could be some time before the new ministry is operating at full speed. Needless to say, the President’s justification to strike a balance between professionals and politicians in his Cabinet remains under public scrutiny.

But beyond bureaucracy and politics, what does this mean for Indonesia’s environment=and for its forests? Indonesia’s high deforestation and forest degradation rates are causing serious local, national and global environmental problems raising the stakes for the significance of this merger.

Many opportunities arise from the creation of this new ministry.

For one, it could help to consolidate the management of issues that used to be under the partial jurisdiction of both ministries. Land and forest fires in Sumatra and Kalimantan, for example, should no longer be a finger-pointing exercise at the national level instead, a single ministry could take real, collective actions to address the underlying causes of fires, so that fire prevention is more effective than firefighting.

Second, the strengths and weaknesses of the two old ministries could complement each other, especially in terms of financial and human resources. Strong environmental laws are weakened when there are insufficient resources to carry them out; merging two ministries can help to fill in any gaps in expertise or resources necessary to take on the huge tasks ahead.

Third, one single ministry could be more politically powerful than two smaller ministries provided that the available resources are optimized and/or mobilized to meet the new and common goals. After duties and responsibilities are sorted within the new ministry, continuous enhancement of capacity of staff will be crucial.

However, there are also challenges presented by this move.

For one, with no single ministry focused only on forests, will Indonesia’s forests become overshadowed by other priorities? For example, would forest land use be handled by the equally new establishment of the Ministry of Agrarian and Spatial Planning?

Second, will the new ministry be able to overcome “turf wars to successfully merge into one? Much will depend on the final structure of the new ministry. For example, the six large Directorate Generals in the old Forestry Ministry will not be easily harmonized with another six large units under six deputies in the Environment Ministry into one large, functional system. This is a big challenge that may put some high-ranking officials out of their jobs.

Orchestrating numerous legal instruments, let alone Law No. 41/1999 on Forestry and Law No. 32/2009 on Environmental Protection and Management, is not an easy task. It will require strong leadership from a sensible conductor to synchronize the tunes formerly performed on different stages in front of different audiences. Winning the confidence of the new ministry’s stakeholders will require proof of concept in a timely manner; likewise, stakeholders should not let the “new kid stumble out of the blocks or go astray unguided. It is the responsibility of Indonesian society to assist them in remaining focused.

This merger is a potentially pivotal moment for the future of Indonesia’s forests. It is hoped that the new ministry will not only keep Indonesia’s forested landscapes at the top of the agenda, but will provide the resources and clout to balance the high value of economic goods derived from the forests, while safeguarding these lands and the invaluable services they provide.

This new ministry could have profound implications not just for the country, but for the world.

Daniel Murdiyarso is a senior scientist at the Center for International Forestry Research (CIFOR).